A few weeks ago there was a tasting of Bordeaux wines in New York City. Organized by the wine critic James Suckling, it gave attendees the opportunity to try a wide variety of wines from around the Bordeaux region, from St. Estephe to St. Emilion to Sauternes. The tasting was held in a restaurant better known for musical events than degustations and the sponsors may have sold more tickets than the space could hold comfortably. Lucie and Steve were there and came away with different impressions, not of the wines themselves, but of the experience. Since the wine tasting experience is the subject matter of Power Tasting, we would like to offer our points of view.

At one point in his life, Steve was quite certain that all the world’s best wines came from Bordeaux. Period. He has broadened his horizons since then but still thinks that Bordeaux’s great chateaux make wines that are among the world’s finest. And this tasting offered quite a few that were special: classified growths from the Medoc, grands crus classés from St. Emilion, and crus classés from Graves. There were also other wines, some of lesser renown and some of lesser quality.

Many of these wines are very expensive these days. Steve remembers well that when he first started buying fine wines, he was able to buy Chateau Pontet-Canet for ten dollars. (Yes, that was long ago.) He was able to taste it again that day, though at more than $250 a bottle, it doesn’t grace our table very often. And that was the point of this wine tasting: to have the chance to taste wines – fantastic wines from excellent vintages – that we otherwise would not have the chance to savor.

Most of the wines presented were from the 2009 and 2010 vintages, two of the best reputed but still young. Many offered 2012 as well, not as highly rated a vintage and much too young. But most of the chateaux present offered verticals, including the younger wines with 2006, 2003, a scattering of 2000 and even one 1989. It was an unparalleled learning opportunity.

It was also an excellent occasion to compare some more affordable Bordeaux with the great names. And some came across quite well. Chateau du Tertre, for example, has always been one of Steve’s favorites and it measured up quite well against its sister winery, Giscours, and many of the others offered at the tasting, even though it costs under $55. And we discovered a little known Graves, Gazin Rocquencourt from Pessac-Leognan, that we liked very much and found for under $40.

Finally, this tasting gave us the chance to meet some of the proprietors and wine makers from Bordeaux. We were surprised to find that the owner of Chateau Fonplegade in St. Emilion, where we had visited more than a decade ago, was an American, Denise Adams. She was happy to talk to people who had visited her winery and were able to taste how much her wine had improved since our visit there. She and her husband also own a winery in Napa called Adamus.

In all, despite the distractions and the crowds, Steve found this tasting to be a valuable and enjoyable experience. Besides the fantastic wines that we had the opportunity to taste, Lucie found the experience extremely unpleasant. The organizer, James Suckling, had picked the wrong venue for this supposedly prestigious wine tasting. We were packed in like sardines, unable to walk from one tasting table to the other. Also, with the bad set up of the tables, it was difficult to get a taste because there was room for no more than two people at each chateau’s cramped space for pouring wine. It took so much pleasure out of her tasting that she thinks that it was disrespectful to the patrons to hold a wine tasting that pricy in a place like that and then pack it to the maximum to get more money.

If you visit Tuscany, you really ought to go wine tasting. There are many sectors where they make among the most famous Italian wines: Chianti, between Florence and Sienna; Montepulciano, where you’ll also find Vino Nobile; and Montalcino, where Brunello is made. By law, Brunello must be 100% Sangiovese and one particular winery started it all, as recently as the 19th century.

Ferrucio Biondi-Santi was a descendant of an aristocratic wine-making family. In 1888, he determined that bottling a single varietal wine would heighten the reputation of the wines of the region and, not coincidentally, would reward long aging. It was the first Brunello, which can today only come from Sangiovese grapes grown in the fields surrounding the lovely village of Montalcino. (The town is worth a visit for its own sake. How could anyone skip a town dedicated to gorgeous panoramic views, excellent restaurants and wine tasting?)

Biondi-Santi is still very much in operation, selling one of the higher priced wines of Italy. There are several levels of visits available, ranging from $16.50 to $55 at current exchange rates. If you just want to taste this famous and fabulous wine, you have to take a tour. The tours are very popular, so you must have an advance reservation. 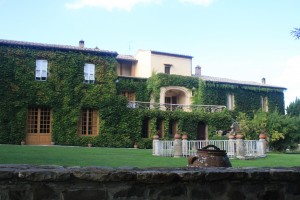 The villa and winery are just south of Montalcino. We had a hard time finding the winery, as there are no signs indicating Biondi-Santi. If you go, look for Tenuta Greppo, which is the name of the villa.

On the tour, you’ll see the historic home and the usual presses, mixing tanks and aging casks that are the same the world over. Except that Biondi-Santi does not use barrels, just large casks of very neutral oak. We say very neutral because they’ve been in use for decades, one more than 100 years old. As mentioned, they take aging very seriously there.

It is in the nature of Brunello that it must be aged for a long time before release, 50 months for a regular (or normale) wine and another year for a riserva. And once you buy it, you ought to lay it down for several years before opening a bottle. The more “modern” Brunellos are made to drink sooner, but Biondi-Santi is anything but modern.

As they pour out the tasting, the tour guides extol the aging potential of their wine, saying that a Brunello purchased today will still be drinking well 85 years hence. How interesting. Steve asked, “I understand about the longevity of the wine but I’m more concerned with my longevity. When should I open it?” They thought about it and said that their wine could be opened ten to fifteen years from harvest.

Going wine tasting is such a pleasant thing to do and Biondi-Santi was a wonderful wine tasting experience full of history and great wine.