Sonoma County is a big place.  It is most famous for the American cartoonist Charles Schultz, the Petaluma Puppy Farm and flooding in the spring.  Oh, yes, and wine.  Lots of wine, some very good, and the people there have been making it for a long time too.  The oldest known commercial winemaking vineyard in California was founded in Sonoma in 1861.  It was – and is – the Buena Vista Winery, where you can still taste their current wines at their winery just outside downtown Sonoma.

There are three major towns in Sonoma County, the others being Healdsburg and Santa Rosa.  They also have restaurants, shops, tasting rooms and hotels.  Sonoma town has its own reasons to visit. 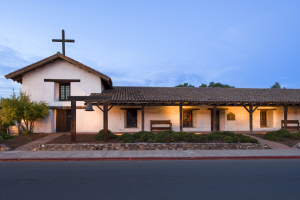 The most important reason, perhaps, is that this is where it all began.  As mentioned above, this is where winemaking started in California.  It was a Spanish mission town, the last one as a matter of fact.  The Mission San Francisco Solano de Sonoma is still standing and available for visiting.  It was in Sonoma that Guadalupe Vallejo, a young lieutenant in the Mexican Army, laid out a street system with a plaza in the middle: today’s town of Sonoma.  The Sonoma Plaza is the main reason, besides the history, that you should visit the town today.

One side of the Sonoma Plaza, with the historic Sebastiani Theatre.  Photo courtesy of joyfimg.pw.

It’s a large plaza, in fact the largest town square in California.  It is surrounded by shops, restaurants, tasting rooms and the Sebastiani movie theater that’s an architectural gem in itself.  The plaza is full of shady trees and in the middle is the Sonoma Town Hall, also worth seeing for its architectural value.

Sonoma is the southern-most town in Sonoma County’s Wine Country.  If you’re driving up from San Francisco and plan to spend only a day or so, it’s the town in the middle of the Carneros and Sonoma Valley vineyards. There are, in fact, many wineries right around Sonoma to choose from, far more than anyone could visit in a day.  While you’re tasting, you’re going to want to eat and Sonoma and its central square are a natural choice.  We had quite an authentic Mexican lunch there.

Moreover, there are many tasting rooms on or around the plaza.  If you’d prefer to taste without a lot of driving, especially on weekends, Sonoma offers a good alternative.  Some of the wines available there are quite good.

Many of the wineries in easy proximity to Sonoma have considerable longevity.  Besides the aforementioned Buena Vista, nearby wineries include Sebastiani, Chateau St. Jean, Ravenswood, Gundlach-Bundschuh and Hanzell. They’ve been making wine for a long time, in some cases back to the 19th century.   Of course their wines today are more up-to-date, but you have the chance to sip history in Sonoma.

We first discovered the town of Windsor when we sought out a restaurant that used to be there, called Mirepoix.  It was quite good in its day, but as with many businesses, their dreams of expansion led to its closing.  As far as we could tell, there was no particular reason to return to this little village without that restaurant being there.

That doesn’t apply to the wineries in the geographic area designated as Windsor.  As with the rest of Sonoma County, the towns incorporate huge swaths of land surrounding a market town, such as Sebastopol, Santa Rosa or Healdsburg.  The town leaders have painted the houses in pastel colors giving the downtown area an Americana charm or a Universal Studios glitz, depending on your tastes.  As mentioned, there are no renowned restaurants, no hotels except some motels along the Route 101 highway.  Windsor seems to be a place that you pass through on your way to somewhere else. 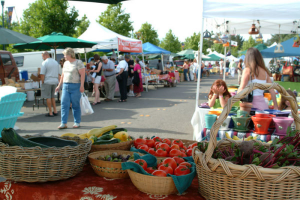 Except if you happen to be there on a Sunday morning or a Thursday evening in growing season.  Then on the Town Green in the middle of Windsor you’ll find an extensive farmers market.  We had stopped one Sunday for some breakfast before wine tasting and wound up spending several enjoyable hours there instead.  When you’re in California Wine Country, you always need to be aware that there are many farmers who grow crops other than grapes.  And the same natural forces that foster fabulous grapes do the same for melons, squash, peppers, peaches, apples, strawberries…

This is the Windsor Certified Farmers Market.  We have no idea who has certified it nor for what.  It is as close to a French marché as anything we’ve seen in the United States.  And much as at those marchés, there are numerous artisans with stands at the Windsor market.  You’ll find cheeses, home-made pickles, beeswax candles, macramé, hanging glass amulets…all the hippy-dippy stuff you’d expect at a California market. 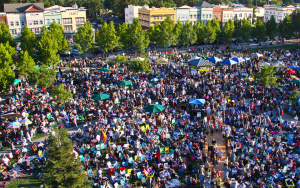 A Summer Night on the Green in Windsor.  (Note the painted buildings in the background.) Photo courtesy of windsorfarmersmarket.com.

There’s usually a musical stage at the Sunday markets and from the end of May through Labor Day there are Summer Nights on the Green concerts during the Thursday markets.  The latter are mostly rock, country and Latin which may or may not appeal to you.

We can almost hear you thinking. “I’ve got a great farmers market at home.  I don’t need to go to Wine Country for this.”  Now, there’s something to be said for the superiority of California fruit but we’re sure that your local farmers raise delicious produce as well.  That’s not the reason to go to the Windsor Certified Farmers Market.  This is your chance to rub shoulders with the local populace, many of whom are the same people who raise and harvest the grapes and make the wine that you did come to Wine Country for.  In keeping with the same spirit that failed to support a fancy French restaurant, this market is intended to attract the neighbors, not the tourists.

An important reason to travel for wine tasting is that you learn about more than what comes in the bottle.  You learn about the whole culture that produced that wine, very much including the people and their customs.  That’s true in France, Spain, Italy and the US as well.  So take a little time when you’re in Sonoma County and come to Windsor to meet the folks.

Last month’s issue of Power Tasting contained an article on planning for a trip to Napa Valley.  We owe the same to the other half of Napa/Noma, Sonoma County.  Many aspects of the planning are the same but there are some very distinct differences as well.  For one thing, Sonoma County is a lot more relaxed than Napa Valley.  For another, Sonoma’s Wine Country is quite a lot bigger than Napa Valley’s, so there’s more travelling to do if you want to see – and taste – it all. 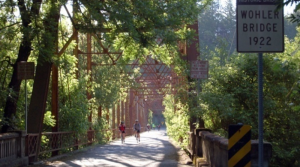 Traveling through Russian River. Photo courtesy of Ride with GPS.

Unti Vineyards (www.untivineyards.com) is a small vineyard with a small tasting room located on Dry Creek Road, about half-way up.  If you’re heading north, look for it on your left.  It’s easy to drive by; we know because we’ve had to turn around on several occasions.  It feels as though Unti has been there forever but was only founded in 1997, which means we’ve been tasting and buying there virtually from the beginning. 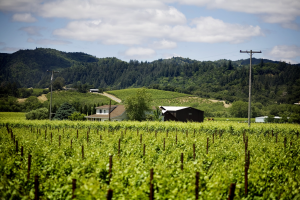 The Unti winery.  Photo courtesy of The Press.

The winery is hardly a palace.  It’s a house, with an industrial building in the back.  Until only a few years ago, you’d pull into the parking lot and walk into a wood-paneled office.  Someone would be on the phone and another doing some filing and they were delighted to be pulled away from these activities to pour you some wine and chat for a while.  The subject of conversation was often Domaine la Soumade in Rasteau, France.

The winery at Soumade has long shelves around the walls with bottles that the owner/ winemaker, André Roméro, had enjoyed.  There among them was Unti!  We felt very international, being fond of both of the vineyards and their wines. 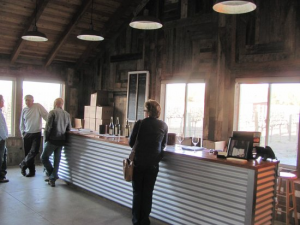 A few years ago, the Unti family decided to build a proper tasting room.  It still isn’t palatial and is a bit industrial with rough wood ceilings and corrugated metal, but the views out over the vines soften it a bit.  It feels homey.  Very often there will be an Unti to pour for you.  The winery is family owned and operated and there is a sense that the vineyards, the wine and the family all grew up together, as an organic whole.  And in fact, they have been farming organically since the early 2000s.

The wines they produce are a rather interesting mix.  Some are Rhône varietals and others are varietals from all over Italy.  Of course, they’re in Dry Creek Valley so they make a Zinfandel, too.  Our favorites are the Rhônes, in particular their Syrah.  Even these have an Italian character when young, with rather pronounced acidity.  Quite a few years ago, we bought a bottle of Syrah, put it away and forgot about it for around five years.  It had mellowed and acquired a more Rhône-like nose and taste.  We’ve been aging the wines we buy there ever since.

Some of Unti’s Italianate wines are familiar, from grapes such as Montepulciano and Barbera.  Others are, according to their web site, otherwise unknown in the area.  These include Segromigno (from Tuscany) and Fiano (a white grape from southern Italy).  We are pleased to see Unti and a handful of other California growers (Seghesio, David Coffaro and Ramazotti come to mind) are focusing on making Italian wines.  If other people can be Rhône Rangers, why not Italian Stallions?

We don’t think of Unti as a destination winery, but we do consider Dry Creek Valley that way.  So if you’re planning a day in Dry Creek, you ought to consider stopping at Unti.  They have a “By Appointment Only” policy, but never once in twenty years have we been turned away.  Still, you’d better check with them on busy weekends.