This is one in a continuing series, irregular though it may be, about favorite wine bars where you can do wine tasting.  It wasn’t meant to be a series, but since we’ve already introduced our readers to the Instituto dos Vinhos do Douro e Porto and L’Ecluse in Paris, then three such articles seals the deal.

So let us introduce you to Reynier in the City of London, that is the sector of London known as The City, where all the financiers are.  Actually, many of them have moved on to Canary Wharf…Oh, forget about it.  This is the old, historic part of London, where London Bridge is, where the streets are tiny and curvy and have names like Threadneedle and Poultry and Pudding to memorialize the trades that were once practiced there.  And there are still many bankers and brokers and insurance chaps and they like to drink with their lunch.  Which brings us to Reynier.

Now what’s funny is that the name of the place is actually the Wine Library (www.winelibrary.co.uk), which isn’t such a bad name, but I’ve only ever known it as Reynier (pronounced RAIN-yay) and no one I know who goes there calls it anything else.  But other than the mystery of the name and the little streets, why should you go there?  Well, “Wine Library” should give you a clue.  It’s a fine wine shop with a  great selection, running heavily to Bordeaux and Burgundy.  “Wait” you must be thinking, “this was supposed to be about a wine bar, not a wine shop.”  And so it is, but with a difference. 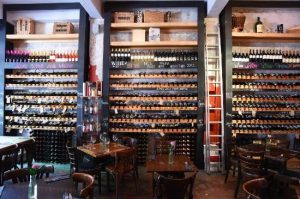 As you can see from the photo, there are a lot of wine bottles and we can assure you that they are all for sale.  And you can see that there are tables.  That’s because you can buy a bottle, pay a small corkage fee and drink the contents on the premises.  Of course we can hear you objecting that you’d never sit down and drink a bottle by yourself.  Indeed not! So go to Reynier with a friend or two.  Which is exactly what all those bankers and brokers and insurance chaps do at lunch time.

It’s not French cooking, or English or Italian because there’s no cooking at all.  What there is is a magnificent spread of pates and hams and terrines and cheeses.  And grainy mustard and crispy baguettes.  And of course the wine you just bought.  No king ever had a finer repast. 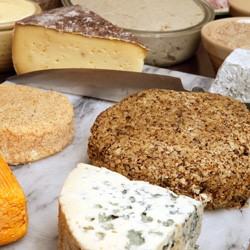 I distantly remember seeing the room in the picture with the chairs and tables, but if you want to move with the in crowd you go to the cellar         (which is where the buffet is) and sit with the fellows in the skinny suits with wide chalk stripes and loud ties (i.e., the finance set) where you will rest your backside on a low stool and eat off the top of an upturned barrel.  If you’re with a few other people, you’ll have to shoulder your way to a seat.  It’s worth it because when you’re with a group you’ll run out of the first bottle rather quickly and someone will have to get up and buy another, and maybe another after that.  And they say that they return to work after lunch?!?

Great wine, great food, history and the three new friends you’re bound to make at lunch.  What could be better?  Come and get it while the dollar is hot and the pound is not.

This is the second in Power Tasting’s series on the best times to visit Napa/Noma.  Since all months are good months, this isn’t much of a challenge.  We wrote about visiting in January in a previous issue.

Ah, springtime!  T.S. Eliot may have said that April is the cruelest month, but we bet T.S. never went to the Napa Valley or Sonoma County in April.  It is a particularly lovely time of the year.  If you go in the early part of the month, you may catch the end of mustard season, in which the space between the rows of vines is occupied by brightly colored yellow flowers.  Even if you don’t, you will be there for bud break and the initial flowering of the vines.  In the colder areas, like Carneros and in the mountains it will be later in the month (or even into May).  In warmer spots like Calistoga you are likely to see greenery earlier in the month.

With winter past, you won’t have the freezing days that can happen even in Napa/Noma in winter.  There probably won’t be any rain either.  You might want to have a light sweater or a long sleeve shirt in the morning but you’ll leave the sweater in the car and roll up your sleeves in the afternoon.  If you come from colder climates, you’ll think that summer is upon you. 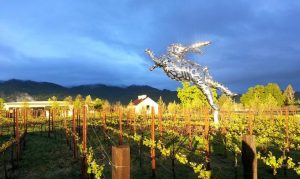 Napa Valley in April, with art on display among the vines.  Photo courtesy of Visit Napa Valley.

But note that we said you won’t see freezing days.  It can get pretty cold at night, sometimes getting below 32 degrees.  As bad as that temperature is for visitors, it’s a lot worse for grapes.  The tender buds are at their most vulnerable and a snap freeze can cripple a harvest before the grapes even appear.  You’ll see giant fans in the vineyards to blow the cold air away.  Others wet the vines so that the resulting ice insulates the vines.  It gives you an alert to bring your jacket with you for dinnertime.

The crowds of wine tasters are not as intense as in the summer months but they’re not as sparse as in the dead of winter, either.  If you can get away for a few weekdays, you should have plenty of time to chat with a wine educator or to sip without someone crowding you at the bar.  Weekends are another matter.  This may be the first chance for many others to taste springtime and you’ll see plenty of them all along the roads and in the wineries.

While there are leaves on the vines, the scenery isn’t as lush as it is at the height of the summer.  If taking in the view is part of the reason for your visit (as it should be), this isn’t the time to visit wineries with grand commanding panoramas, like Sbragia Family in Sonoma’s Dry Creek or William Hill in Napa.  It would be better to think in terms of snuggling up to the vines, which makes Grgich Hills in Napa Valley’s Rutherford or Limerick Lane in Russian River in Sonoma County better April destinations.  If springtime brings a smile to your lips, all the wines will taste better then.

If you buy a bottle of Volpaia Chianti (http://www.volpaia.com/), either the Classico or the Classico Reserva, not only will you get a bottle of rather nice wine (it seems to be our house red these days) but you will also receive a nice little sketch on the label, shown below.  If you don’t mind taking a long drive up a steep hill to visit the only winery around for miles, you can see the sketch come to life.

The sketch on a bottle of Volpaia Chianti Classico

The nearest large town to Volpaia (pronounced vole-PIE-ya) is Radda, definitely worth a visit in itself if you are visiting the Chianti region of Tuscany.  It is in the heart of the Classico region where all the best Chiantis come from.  (It’s called Classico because it’s from this region, a brilliant marketing ploy on the part of the local wine makers.  There’s nothing any more classic about it than Sangiovese from other areas of Tuscany, but you do get the DOCG (Denominazione di Origine Controllata e Garantita or “controlled and guaranteed denomination of origin”) label and the other marketing inspiration, the Gallo Nero or black cockerel.

According to Google Maps, it’s only 7.4 km or 12 minutes from Radda to Volpaia.  Evidently Mr. Google looked at the road from a satellite and never drove it.  The road is full of hairpin turns and it’s straight up.  There are some beautiful views to be had along the way, but the driver (Lucie was driving) won’t be able to look at them and the passenger (Steve  was), who will, will be more terrified by the drop than thrilled by the beauty.  But never fear, they lose very few tourists. 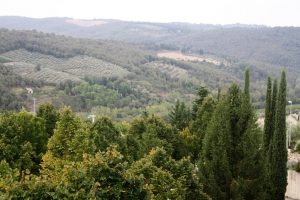 On the road up to Volpaia

And then you get to the village and you understand why you made the voyage up the mountain.  It looks exactly like you expect a tiny Italian village to look.  There are the villas, the osteria, the cistern and the castello…and that’s about it.  It seems that all of this is owned and operated by one family, the Mascheronis.  It attracts tourists all right, but it’s no tourist attraction…it’s the rarest find a tourist can make; it’s the real thing. 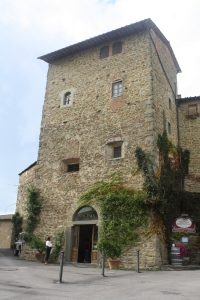 And, oh yes, you can taste wine.  In a way, it’s a typical wine tasting setup: a bar, some bottles, a young man pouring you some wine and explaining what you’re drinking.  But it’s in an 11th century castle!  There’s more to taste than Chianti, although the Reserva has been getting good numbers from the rating magazines.  There’s a Cabernet Sauvignon that has also been well received, a few whites and a Vin Santo dessert wine worth contending with.

Walk into the room next to the bar and you’ll get a sense of the centrality of wine (and olive oil) making in this village.  The bottles gathering dust are yet another reason why you’ll think you’re in a post card. 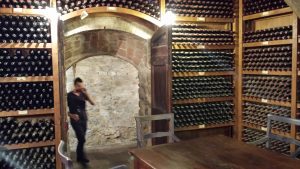 So now you have to drive down.   Steve tasted the wines, Lucie being the driver, she had just a sip of the Chianti and said: it tastes like hard cherry candy !  The young man said, you’re right, that’s what our Chianti should taste !

There’s no place in the world that’s more fun for wine tasters than Napa Valley.  So many wineries.  So many great wineries!  And they’re one after another after another, primarily on two main roads and the cross streets that connect them.  Of those two main roads, the one with the greatest concentration of top-flight wineries is Route 29, also known as the St. Helena Highway. However, the ability to choose from among such a plenitude means that lots of people want to drive along that road and visit.

Especially on weekends and holidays, traffic is so dense that it is difficult to get from one place to another.  If you only have the chance to travel to Napa Valley on a weekend of holiday, you’re pretty much stuck with a bumper-to-bumper crawl.  There’s nothing you can do to make it easy, but there are ways to make a voyage into this fabulous corner of Wine Country easier, less onerous.

The best advice, as always, is to prepare your trip in advance and to be sensible in both your selection of wineries to visit and the amount of wine to taste.  Don’t let “Oh, it’s so crowded” discourage you from visiting one of, if not the, best American winemaking region.  If so, go visit during the week, not on weekends.