This is the first in what will be an irregular series on wine snobbery and how to avoid it.

There is a difference between being a wine snob and being a wine lover.  Many people enjoy just a glass wine or two with dinner.  Some of them (and you are one if you are reading Power Tasting) get pleasure from reading about wine, travelling to Wine Country to taste wine and talk about wine with their friends.  Wine snobs do all those things too but the essence of their snobbery is that they want to be and be seen to be superior in their wine knowledge compared with their friends.  Worse yet, for those of us who appreciate wine tasting, is that they also like to lord it over total strangers standing next to them in winery’s tasting room.  You don’t want to be one of those people. 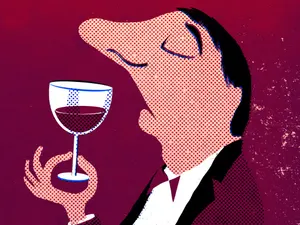 Before we can talk about how NOT to be a wine snob, we ought to have an understanding of what typifies such a person.  This becomes problematic, because there are certain things that all wine lovers do that might be considered snobbery by those who only occasionally get involved with wine.  So it makes sense to consider the things that might be seen as snobbish by some people, but which we think are acceptable.

Power Tasting is not in the business of reviewing restaurants and we won’t be starting to do so now.  But it is not saying much to state that The French Laundry, Thomas Keller’s flagship restaurant, with its three Michelin stars, is the best eatery in Yountville.  Maybe in all of California.  Possibly the United States.  We’ll leave it to others to say where it stands in the world’s gastronomic pantheon.  In this edition of Power Tasting, focused on Yountville, we would be remiss if we didn’t talk about our experiences there.

We’ve dined at The French Laundry a few times.  The first was just a short while after it opened in 1978, prior to Mr. Keller’s involvement. We were on a wine tasting trip with friends, passed by on a Saturday afternoon and walked in, asking if we could still get lunch.  Try doing that today!  The contents of that meal are lost in the fog of time, but not the overall experience.  We were seated upstairs by a window, looking out on the farms – not vineyards – of Yountville, including one just across the street.  The fare on the menu included chicken from this farm and lamb from that one…and the farms were in walking distance.

Today, The French Laundry is on a section of Washington Street that is largely residential, but shopping, hotels and tasting rooms are not far away.  The only remnant of yesteryears’ farms is the French Laundry’s private garden just opposite the restaurant.  Last year, Thomas Keller has completely renovated the restaurant, spending $10 million to make it very modern.

In 1998, we dined there after Mr. Keller had taken over.  The highlight was that we were invited into the kitchen to meet Chef Keller.  The stainless steel surfaces gleamed and a small army of cooks scurried around making last minute dishes and making sure that all was in good order.

In 2014, we were riding on the New York subway when we saw Mr. Keller across the car, on his way to Per Se, his East Coast equivalent of The French Laundry.  A few weeks before, the New York Times had published an article about Mr. Keller and a favorite recipe he used to make for his father.  We tried it at home and loved it. We all got out at the same station and we took a few minutes to speak with the chef, extol his restaurants and cookbooks and say how much we enjoyed the recipe of his that had appeared in the newspaper. He was very friendly and talkative.  On the basis of that “deep, personal relationship” we wrote Mr. Keller requesting a table at French Laundry for a wine tasting trip we were planning several months hence.  It worked.

As it happened, the dinner coincided with Lucie’s birthday that year.  When we arrived, the staff wished her a happy birthday, and that wish was repeated on the custom-printed menu we were given.  Again the meal was astonishingly good, but then something totally unexpected occurred.  The power went out in Yountville and the restaurant was shrouded in darkness, but only for a few minutes.  The staff brought out stout candles and placed them all around the restaurant and along the stairs.  French Laundry is beautiful as it is; by candlelight it’s extraordinary.

Not so long ago, Yountville was a sleepy farming village where freight trains stopped to pick up produce and drop off supplies.  We always hoped it was named for Milwaukee baseball legend Robin Yount, but it actually got its name from one George Yount, who was reputed to have planted the first vineyard in Napa Valley.

There are many reasons why it grew into the tourist mecca it is today, not least being the explosion of interest in California winemaking.  But if Yankee Stadium is the House that Ruth Built, then Yountville is the Town that Thomas Keller Put on the Map. Beginning with French Laundry, he has added Bouchon, Bouchon Bakery and Ad Hoc to his restaurant empire, all along Washington Street in Yountville.  Keller has recently opened La Calenda, a Mexican restaurant in the location that used to house the late, lamented Hurley’s.

With all that, Yountville is now the culinary capital of Napa Valley.  After his time as chef at Domaine’s Chandon’s Étoile restaurant, Philippe Jeanty opened Bistro Jeanty, a veritable reproduction of a country French bistro.  Richard Reddington added Redd and then Redd Wood.  And on and on.  It’s hard to find a bad meal in Yountville.

With the restaurants came the diners and the shoppers.  Washington and Yount Streets abound with boutiques, topped by the V Marketplace, a shopping center with the full line of Napa Style accessories, housewares, wines, restaurants and galleries that give Napa Valley its fashion tone (and fill your mailbox with catalogs).

There are also a number of tasting rooms along Washington Street.  As with all in-town tastings, there are some that are well worth a stop and others that are best passed by.  Unfortunately, there is little way to know in advance which is which.  In Yountville, we have enjoyed Priest Ranch and Beau Vigne, which is not to say that some of the others aren’t worthwhile.

As a visitor to Yountville, a great way to enjoy it is to make a day of it.  This is especially good advice on a weekend, when the roads and wineries on Route 29 are jammed.  Begin with breakfast at Bouchon Bakery.  You’ll stand in line for coffee and croissants but the wait will be worth it.  Sit outside at one of the little tables and think about all the places you will go today.  Well fortified, you can try a winery and look into a gallery or two.  Then it’s time for lunch.  Why not a pizza at Redd Wood or a salad at R & D Kitchen?

A few more wineries in the afternoon and some serious boutique-ing come next.  Be smart about the alcohol you consume; still, it’s nice to know that you don’t have to get behind the wheel to go from place to place.  An aperitif at the bar at Bistro Jeanty will give you the chance to mingle with a few locals.  Then it’s off to dinner. 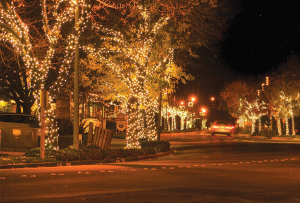 As noted, the choice of restaurants is broad, but if you want to be in with the in crowd, queue up for a table at Ciccio.  Run by the owners of Altamura Vineyards, Ciccio doesn’t take reservations and it is always packed with people who have the patience to dine there.

A final word: visit Yountville at Christmas season.  They wrap every tree on Washington Street in little white lights and the town becomes a fairyland.  It’s magical.    And the crowds are less in December as well.

For us, it is impossible to think of our experiences of tasting wine in Napa Valley not to think about Domaine Chandon.  It was the first place we visited on our first wine tasting trip to Napa Valley.  The site was beautiful; the education about making sparkling wine stayed with us forever; and the wine was first rate.  This was in the late 70’s and everything was new and wonderful, only enhanced by the haze of time.

It was the beginning of an avocation that has led to this e-magazine.

There are differences between that experience and the one you can have if you visit Domaine Chandon today.  At that time, the winery included a restaurant, Étoile, that closed in 2014.  Back then, the restaurant was the seat of haute cuisine in Napa Valley, and people flocked there to taste real French food (!) in America, washed down with real French Champagne (!!).

But real Champagne comes only from the section of France by the same name.  Domaine Chandon is a subsidiary of the French company Moet et Chandon and so they never describe their American product as Champagne (with or without a capital c).  Their labels eschew any description at all, except to say that they are Brut (or rosé) and Méthode Traditionelle. 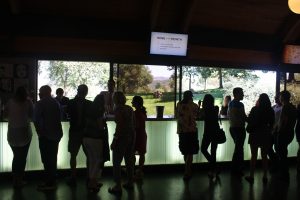 The tasting room overlooking the gardens.

The educational experience at Domaine Chandon is also diminished from the olden days.  Then, a guide walked you through the winery and explained double fermentation, dosage and how they got that big cork into the bottle.  Today, you can walk through yourself and read the plaques as you go, but it’s not the same thing. After the tour you were invited to sit in the charming little garden under umbrellas and they would bring you a glass of sparkling wine, a little bowl of spread cheese and croutons. 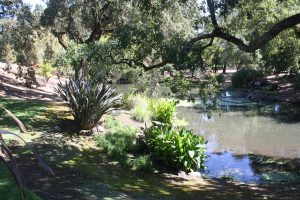 After all about what it was, Domaine Chandon is still worth a visit today.  There are far more sparkling wines to taste than in the past, including Pinot Noirs that were not even thought of then.  The tasting room offers many wines to compare, including the Bruts from around Napa Valley.  Depending on the day, they may open wines from Yountville (the mother ship), Carneros or Mt. Veeder.  Their top wine was and is Étoile, in Brut and rosé, as well as the top of the top, the Tête du Cuvée (which is rarely available for tasting but is, of course, sold there).

The grounds are gorgeous, a sprawling campus with fountains, ponds and greenery that invite a long, lazy afternoon, sipping Champa…, oops, sparkling wine.  And Domaine Chandon makes that easy with a spacious veranda and seats around the gardens.

Unfortunately Domaine Chandon is to an extent the victim of its own success.  It was the first French winery to open in the United States and it has been a landmark for more than 40 years.  So people arrive in great numbers, especially on beautiful summer weekends.  If you are there on a busy day, you will be given your tastes but will feel rushed and you won’t be able to engage in much conversation with the server.  Maybe a rainy day in November is the best time to visit.  Our last experience at Domaine Chandon was not enjoyable because of all those inconveniences.  It was also so crowded that getting to the bar to ask for another tasting was almost impossible.

But try it, take in the beauty of the site and of the architecture of the tasting room and enjoy the wines.  You’ll become a part of California history.