There are few if any wineries in Napa Valley with a heritage as long as that at Louis M. Martini, tracing back to 1922.  Visiting this winery was among our earliest experiences in wine tasting.  And the familiar bottles with a horse pulling a cart full of grapes were staples in many wine stores around America.  Today, the horse and cart are gone, replaced by a prominent crown.  This is emblematic of the change at Martini, just as the new Louis M. Martini is emblematic of the changes in Napa Valley. 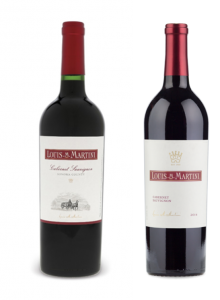 The old and new labels of Louis M. Martini Cabernet Sauvignon, with and without a horse drawn cart

There is still a Martini winery on the same property, a recently opened building covered in terra cotta tiles, with a large garden alongside.  The interior has majestic ceilings, beautiful appointments and some rather interesting wines.  Perhaps not so much on the outside, but this is truly a Napa Palace.  It is still named Louis M. Martini but the Gallo company that owns Martini has reinvented it; only the name remains.

That is not quite fair.  There is still the Monte Rosso vineyard just across the county line in Sonoma.  It had long been the source of the finest wines produced by Martini and still is today.  It was always best known for the Cabernet Sauvignon grown there and Martini still makes that wine.  But now Cabernet Franc, Malbec, Zinfandel and a red blend also come from this historic vineyard.  The Cabernet Sauvignon remains our favorite, but the others are quite good as well.

When you arrive at the winery, you are greeted by a host who directs you either to the Crown Bar or the Heritage Lounge.  While both rooms, as well as others in the garden and the library, are officially by appointment only, our experience is that visitors can just walk in.  However, we were there on a Thursday.  We are sure it would be tougher on a weekend and even more so in the summer.  So either reserve or call ahead. 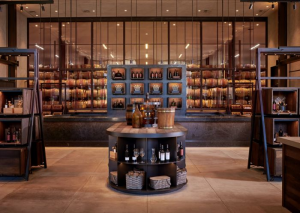 The Crown Bar is a beautifully appointed room with a wide bar and dramatic lighting.  This room features Martini’s recent releases, where you can sip some of your old favorites such as the Sonoma and Napa Cabernet Sauvignons.  We have nothing against these wines and have often bought them, but when we go wine tasting, we prefer to focus on the reserve wines.  These are served in the Heritage Lounge. 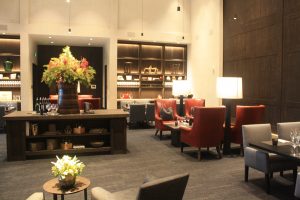 This room is also expansive and is furnished like an assemblage of living and dining rooms.  All tastings are seated.  Here you can taste the Monte Rosso vintages as well as Martini’s top wine called Lot No. 1, sourced from various vineyards around Napa Valley.  It is pure Cabernet Sauvignon and is twice as expensive as any of their other wines.  It is well worth tasting, but we will leave it to your tastes as to whether it is better than the Monte Rosso Cabernet Sauvignon.