This month’s Places to Visit article is about a place most wine lovers can’t visit.  It’s a trade show that was held in March in New York City’s Javits Center for the international wine trade.  As Power Tasting’s reporters are considered to be “trade”, we were able to attend and are pleased to offer our readers an account of what the event was all about. 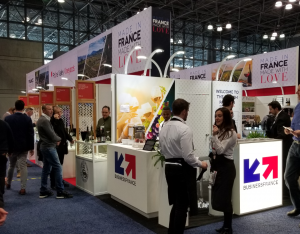 Part of the French pavilion at VineExpo New York 2020.

It was mostly about the business of wine.  In particular, growers from all over the world sought importers and distributors so that they could sell their wines in the US, especially on the Eastern Seaboard.  And of course, importers and distributors were looking for new producers without the expense of travelling overseas.  [VinExpo New York occurred on March 2 and 3, after the coronavirus had begun to spread but before it was the worldwide crisis it has become.]

Wines were displayed (and tasted) from all over the globe: France, Italy and Spain being the most prominently positioned, but Brazil, the Czech Republic, South Africa and Georgia also had sizable exhibits.  (That’s Georgia from the Caucasus, not from Dixie.)  There was a huge tasting area for organic wines.  There were also numerous exhibits of wine accompaniments, such as glasses, barware and preservation systems. 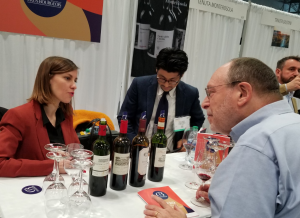 Jeffrey Franklin of the Society of Wine Educators discussing (and tasting) with Armelle Cruse and Paul Maron of Cru Bourgeois du Medoc.

There were also many lectures and curated tastings.  These were split between sessions that were clearly for those in the wine business, such as a panel discussion sponsored by Wine Spectator on “The Changing World of Wine Retail in the US” and others that were about wines from certain locations, such as the Czech Republic and Sonoma County.  Not surprisingly, the lectures that included tastings were the ones most widely attended.

So what was to be learned that is of interest to (shall we say “non-professional”) wine tasters?