As you’re enjoying the rustic air of Wine Country, you might want to know how well the grapes were raised and harvested and then what was done to the juice in the industrial processes of crushing, fermenting, aging and bottling.  Vignerons and wine makers are as concerned about sanitary and healthful practices as anyone – in fact, more so than many of us – and they have responded in a number of ways.  But many of the terms in use in the world of wine today can be very confusing.

Making wine used to be rather simple, at least in concept:  Plant vines; Nurture grapes; Harvest and process grapes; Repeat.  Now there are considerations that are intended to make the wine better that are either advanced or trendy, depending on your perspective. 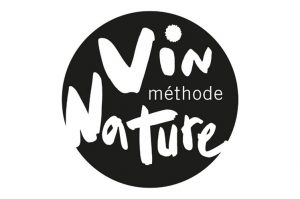 The logo for French “natural” wines.  Courtesy of decanter.com.

We at Power Tasting applaud any methods being applied to make better wine.  We have found that these practices have vastly improved winemaking in areas that used to be known for “rustic” (i.e., low quality) products.  But we are not fans of cultish ideas that are more about lifestyle philosophy than winemaking.