There is only one reason we know that you MUST decant a bottle of wine.  If the cork breaks as you open a bottle and you can’t get it out, the only option is to push it in.  This makes decanting necessary.

After that, there are several reasons why you might WANT to decant your wine: 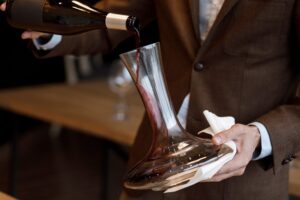 Photo courtesy of The Manual.

Some restaurants decant wine, perhaps in an effort to justify overcharging.  Some people decant wine because they think they look cool, even if it makes them look cork-dorky.  And then there are the occasions when Aunt Gertrude is coming over for dinner and she gave you the decanter.

Wineries generally don’t decant their wines, although they should.  They mostly serve younger releases that might benefit from some extra air.

If you are going to decant a bottle, here are some tips.