The rationale for wine tasting as an avocation is – of course – that you get a chance to try a lot of really good wines.  Sometimes when we enter a winery’s tasting room, we know we are going to taste something delicious or at least interesting.  Often, when we’re visiting a winery for the first time, we may not know what to expect, but we have every reason to be excited about trying something new.  And a few times, we’ve been disappointed with the wines we’ve tasted.

But there have been rare occasions when we’ve been handed a glass of really bad wine.  That’s not the same as wine we didn’t like.  We’re talking about wine that has been poorly made, bottled or stored.

The most common cause of spoilage is corked wine.  This is not really the fault of the winemaker but rather of the company that sold corks to the winery.  In growing or preparing the corks, a grower may have unintentionally introduced a chemical known scientifically as 2,4,6-trichloroanisole (or more usefully, as TCA).  From the moment that cork is put in the bottle, the wine in it will taste corked. 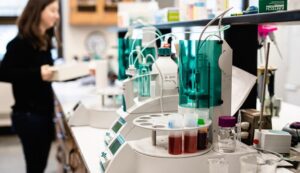 We were once at a winery that prides itself on their scientific approach to winemaking.  We even got to see their lab where people in white coats were doing something that looked like high school chem lab to us.  When they poured our first taste it was immediately apparent that the Chardonnay smelled and tasted like wet cardboard.  (Some people say it’s wet dog, but let’s not go there.)  The server was at first surprised and then abashed, but truly it was her fault.  She should have tasted the wine first before pouring it.  Maybe she did and didn’t recognize that the bottle was spoiled, which is even worse.

Consumers should be on the watch for cork taint.  If you find it at a tasting room or at home, bring it to the winery’s attention.  Many corks have identifiers so that the winery can tell who had sold them the faulty corks.

Another common fault in wines you might taste is called brettanomyces, or brett.  This is a type of yeast.  Since yeasts are an essential ingredient in making wine, some funky yeasts are bound on occasion to sneak in.  However, in some cases brett is considered a feature, not a flaw.  This yeast produces an aroma and taste that is generally referred to as “barnyard” in polite company.  In rude company it’s called…well, never mind.  There are some wine lovers who find a bit of this taste to be admirable, especially in Pinot Noirs from Burgundy in particular.

For the record, we’re not brett fans.  A little is bad and even Burgundians know that a lot isn’t good.  If you find it in a bottle opened at a winery, bring it to management’s attention right away.  When it happens in a wine opened at home, a reputable wine seller should exchange a purchase.

The point is not to play wine detective looking for bad bottles.  They are rare enough that most people only rarely encounter one.  We have seen some people who were evidently unaware of what bad wine smells and tastes like, finish a bottle and not understand why they didn’t like it.  That’s why a sommelier takes a sip of our wine and let’s us try it before serving it.  There’s no reason to drink bad wine…Life is too short !