Well, maybe not in Québec City, but just outside, only minutes away. So that counts.

The locale is the Ile d’Orléans, only 15 minutes’ drive from the center of the city, reached by a bridge over the St. Lawrence River. As it happens, we have a home in Québec City, where Lucie is from. Ile d’Orléans is an island in the middle of the St. Lawrence River, just downstream from Québec City. It is 21 miles long and five miles wide at its broadest point. A lot of French-speaking Canada originated here. It is primarily farm land, the fruit and vegetable basket of Québec City. Now the farms include vineyards.

The climate as far north as Ile d’Orléans might lead you to believe that it is impossible to discover winemaking there, but if the fifty United States can each boast at least one winery, why not the province of Québec (of which Québec City is the capital)? Of course, the grapes that grow so well in warmer climes don’t do well there, so the local winemakers use such grapes as Frontenac, St. Croix, Maréchal Foch, Vandal, Hibernal and Vidal. These have been specially developed to withstand short summers and harsh winters, many by agriculturists at the University of Minnesota. (Take that, UC Davis!)

In 1535 the French explorer, Jacques Cartier, set foot on the island and because of the abundance of wild grapes growing, he called it Ile de Bacchus. At least to the tastes of those of us who are used to the grapes of Bordeaux, the Rhône and Italy, the wines here aren’t great. To be honest they cannot be compared, because of different grapes, climates and terroir. It’s amazing that they still can grow wine grapes there at all!   The grand exception to that warning is, not surprisingly, the ice wines from the island, many made from Vidal grapes. In tasting terms, these dessert wines make the trip worthwhile. One of our favorite wineries there is Vignoble du Mitan; we enjoyed their red wine Le Rigolet but really love L’insulaire, their late harvest wine. But truly, these delightful wines are not the only reason to make the trip.

If you get a day with ample sunshine, you will cross that bridge to find charming villages with the narrow-steepled churches that are the signature architecture of Québec. There are numerous fruit stands and a very popular chocolate and ice cream shop in Ste. Pétronille, five minutes from the bridge. You will have matchless views of the St. Lawrence River, Québec City and just on the other shore, the Chutes Montmorency, a waterfall 98 feet higher than Niagara Falls. You can pack a picnic and enjoy it at many of the wineries or you can have lunch at one of the many inns and restaurants that dot the island. Two of our favorites are Auberge La Goéliche (just beyond the chocolatier in the village of Ste. Pétronille) and the ancient Moulin de St. Laurent in the village of St. Laurent. The food is good in both places but the atmosphere is better. 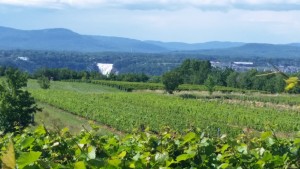 The vineyards of Ste. Petronille with the Montmorency Falls and the Laurentide Mountains in the background

There are five wineries you can visit: Domaine de la source à Marguerite, Vignoble du Mitan, Le Vignoble de Sainte-Pétronille, Vignoble de l’Isle de Bacchus and Cassis Monna et filles. Cassis Monna makes fruit wines and a creditable crème de cassis; the others make table and dessert wines. Each winery has its own personality and history and its own charm. Many sell other agricultural products, often derived from maple syrup and the vegetables that Ile d’Orléans supplies to the city folks. We also enjoy stopping for a beer at the Pub Le Mitan, a microbrewery, to get phenomenal views of the river and the cliffs beyond.

We, as a born Québécoise and as an adopted one, urge you to visit Québec City, the closest you can get to France without crossing an ocean … and without the French themselves (that’s Lucie talking here). Take in the history, the cafés, the cultural festivals, the joie de vivre. And leave a little time for some wine discoveries on the Ile d’Orléans.

There’s a winery we know that isn’t exactly off the beaten path, but the path isn’t very obvious either. Truchard Vineyard (www.truchardvineyards.com) is on Old Sonoma Highway at a driveway where the road bends a little. If you approach the winery from the north (the town of Napa) you might just catch a glimpse of a sign by the right side of road. But if you’re coming from Route 121 that runs across Carneros, the sign is facing the other way and you’ll probably drive right by Truchard. We have, every time we’ve visited this winery.

It’s worth the effort to find this little corner of Napa Valley that has seeming let time pass it by. There is no ornate “visitors center” here, just an old barn on one side, a home on the other and a patio out front leading to a classic stone entrance to their cave. The attraction of a Truchard visit is not going to be the architecture or the tasting room; it’s the people and the wines.

Each time we’ve been at Truchard, we have met Jo Ann Truchard who, with her husband Tony, followed a crazy dream and became grape farmers and winemakers when nobody saw the potential for developing vineyards in their neck of the Carneros woods. Mrs. Truchard is quite voluble about their history (alas, we’ve never met Tony) which you can read on their web site or let her tell you when you stop by. It is an inspiring tale of grit and artistry that’s worth reading or hearing.

When we first visited, we met Mrs. Truchard in the barn, where she explained the vineyard history and offered us a glass of Chardonnay. On that occasion, we had only a little time and said (as we often do) that we’d like to focus on red wines only. She remonstrated that we had to try this white wine, because after all it’s a “true chard”. With a smile on our faces, we tried some and liked it enough to buy some. She then led us into the cave, where there were bottles open all around. What a selection! Truchard makes all the wines you’d expect, leading with the aforementioned Chardonnay and a Pinot Noir we really like. Those are the grapes normally grown in Carneros. But Cabernet (both Sauvignon and Franc)? Zinfandel in the coldest, wettest part of Napa Valley? Rousanne? Tempranillo? The Truchard family seems to be fearless about what they grow. We enjoyed their wines so much that we joined their wine club on that first visit.

In a more recent visit, we only tasted in the barn, because the 2012, 2013 and 2014 harvests were so enormous that there was no room left in the cellar. It was very much like California wine tasting in the old days. You just stand around; somebody pours; you taste…and taste…and taste. Seriously, be careful about consumption when you visit Truchard.

Most of Truchard’s production is sold to other winemakers, including Frog’s Leap, Nickel & Nickel for their Chardonnays; Robert Mondavi uses some for their Cabernet Sauvignon; and Conn Creek and ZD buy Truchard’s Sauvignon Blanc. So you might have tasted Truchard grapes without knowing it. We were told that only 5% of their grapes are bottled under their own label.

You really do need an appointment to visit Truchard and they don’t offer many. If you can find the time on your schedule, this winery is a welcoming little corner of the Napa Valley of yesteryear.