We recommend that you take advantage of these wine lists to broaden your knowledge of wineries to visit while you’re in the region.  But how do you choose? 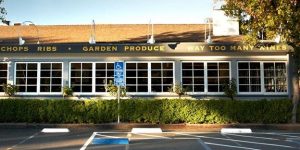 As it says at Yountville’s Mustards restaurant, there’s way too many wines to choose from.  Photo courtesy of napavalley.com 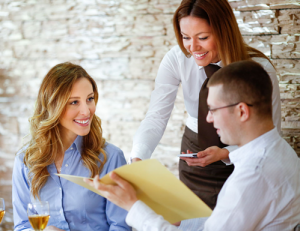 There are some fabled roads in America.  You can get your kicks on Route 66.  Ten cents won’t even shine your shoes on Broadway.  42nd Street is naughty, haughty, gaudy and sporty.  There are no songs about California’s portion of US Route 101.  It runs mostly south-north from Los Angeles through San Francisco all the way to the state border and up to Seattle.  Interstate 5 runs parallel to it and it’s much faster.  The Pacific Coast Highway is much prettier. 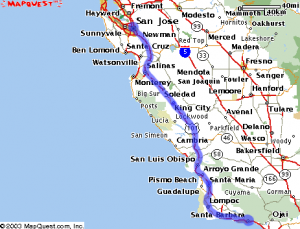 But if you want to be serious about wine tasting in California, at some point you’re going to deal with Route 101.  It is the main stem for almost every wine making area in the state, with the very notable exception of Napa Valley.  It will take you to Santa Barbara, Santa Maria, Paso Robles, near to Monterey, and Sonoma County.  If America had a route des vins, this would be it.

As you drive north, you have the Pacific Ocean on your left and the mountains on your right.  Mostly you can’t see the ocean; take the pacific Coast Highway if that’s your objective, but be prepared to crawl through towns.  But you can see the sea for a while as you approach Santa Barbara.  Around Pismo Beach, Route 101 skirts the coast along some rather impressive cliffs.

The road heads inland through as you get to Paso Robles where, surprisingly, the mountains appear on your left.  Route 101 divides the vineyard areas of Paso Robles.  On the west side, in those mountains (well, maybe they’re just foothills at that point) are the artisanal wineries that have raised this region’s reputation.  On the left are the mass production vineyards: endless, endless vistas of vines.  There are some quality vineyards these days on the east side of Route 101, but if you’re driving through you are overwhelmed by the quantity.

As you get closer to San Francisco, the endless vista is brutally modernistic office buildings in Silicon Valley, followed by the dreary traffic from the airport to the city.  Then, suddenly, the highway disappears and you are on city streets.  Use your GPS or your roadmap because it will take you to an American legend, the Golden Gate Bridge.  If the weather is good, you will offer you a glorious view of the City by the Bay.  If that famous fog rolls in, you’ll just have to take it on faith that the city is still there.

Once over the bridge, you’ll soon come to Sonoma County and one wine tasting region after another.  Petaluma and the Green Valley.  Santa Rosa and the Russian River.  Windsor and the Alexander Valley nearby.  Healdsburg and Dry Creek.  It’s not that you can spend days there; you can spend years visiting Sonoma County and you won’t see it all, because it changes all the time.

You can keep going and find more vineyards, but if you’ve made it from Santa Barbara to Healdsburg, you’ve seen the best of the Route 101, in terms of wine tasting, anyway.  Maybe they should write a song about it.

The Syrah grape is ubiquitous.  It originated in ancient Persia, around 4,500 years ago, according to archaeologists, in the region that now contains the city of Shiraz.  And indeed, some wines made from the grape are still called Shiraz.  It is now grown in France, mostly in the Rhône valley and the Languedoc.  You’ll find it in California, especially in the Central Coast.  It is a primary grape in Australian wines (where they call it Shiraz) with the center of production in the Barossa region.

We were first introduced to Syrah many years ago, when traveling in abroad.  Some Aussie blokes we knew gave us a glass of Oxford Landing Shiraz.  At that early stage of our wine tasting education, red wine meant Cabernet Sauvignon and nothing but.  So our first reaction to this glass was that there was something wrong with the wine.  But it wasn’t sour; it didn’t taste bad.  It was just different.  This was a wine tasting epiphany!  Oxford Landing is a mass production wine and we’ve had many better Syrahs since then, but that first one has never been forgotten. 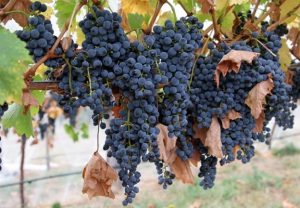 One part of that experience still rings true: Syrah is different.  Sometimes it’s a deep, dark wine that goes with roast beef.  California’s Darioush winery makes wine like this.  (The founder is of Iranian descent and calls it Shiraz.)  Others are lighter and can accompany chicken or pasta.  You just can’t tell until you taste.

Syrah is the primary grape of the Northern Rhône.  Wines from Cornas must be 100% Syrah and it is central to most of the other wines of the region.  There’s plenty of depth in these wines but there is also a notable acidity.  As we have gone wine tasting in the Northern Rhône, we’ve been surprised at how notably acidic some of the wines are, especially those we tasted at Cave Yves Cuilleron.  Of course, acidity is a good thing in wine; no complaints, we’re just noting the difference.

There’s plenty of Syrah grown in the Southern Rhône and the Languedoc, where it is generally blended with Grenache and other grapes.  Blends are the rule for AOC-denominated wines, so single varietal wines from the region are marked as IGP (Indication Géographique Protégée) or VdP (Vin de Pays).  When you can taste the full varietal character in the southern regions, there is often a note that the locals call garrigue, the scrubby vegetation that grows along the hillsides with some flavors of rosemary.

California’s Central Coast makes Syrahs that are fruit bombs with way over-the-top alcohol levels. Sometimes we call those “chewy” wines.  In general, Syrah likes warm weather but the heat of the Central Coast really pumps up the sugar, which in turn becomes alcohol.  The Syrahs in the Napa/Noma area tend to be mellower, though still on the deep end.

They grow more Shiraz in Australia than any other grape, and the wines tend to be big and sunny, which brings us full circle back to that first glass.  The point of this round-the-world Syrah trip is that you never know what you’re going to get when you first taste a Syrah.  Big and bold, lighter and acidic, punchy and alcoholic, open and herbal – they’re all the same grape, but not the same terroir, not the same winemaker.

So when you travel for wine tasting, be prepared for something different, whenever they offer you a Syrah.

Tamber Bey (www.tamberbey.com) is a unique experience for visitors to Napa Valley, one that hearkens back to the valley’s past.  Where today there are vineyards, restaurants and resorts not that long ago were orchards and ranches.  Tamber Bey combines the owner’s interests in both wine and horses.  The winery and tasting room are located at Sundance Ranch, where you can not only taste wine but also enjoy their horses.

In another article in this issue, we talk about discovering wines at dinner and following up with a visit thereafter.  We first discovered Tamber Bey on a small, eclectic wine list where we knew none of the wines.  The Cabernet Sauvignon was powerful and rich in the mouth then (and still is), so we drove over to see what else they had.  What we found was a ranch house (now a tasting room) with a large area behind it where visitors can lounge and horses can be stabled.  There were no vines to be seen. 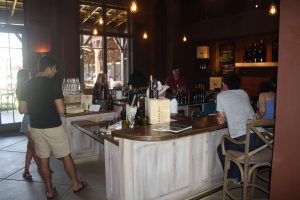 The tasting room is made of wood, as is the entire location.  There’s a large bar with enough space for a dozen or so visitors to be comfortable.  We don’t think it was ever meant to be a destination for busloads of wine tasters.  If that were to occur, there’s plenty of room out back for them to sit, wander and enjoy their wine.  So when you go to Tamber Bey, try to avoid a rainy day. 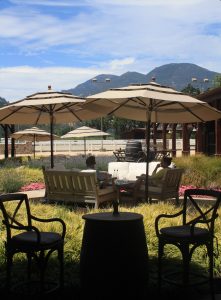 Service at the bar is unusual, at least one day that we were there.  One of the servers was a fellow who we had come to know at another winery.  The other one was the Tamber Bey’s owner, Barry Waitte, who made his first fortune in information technology.  We hardly guarantee that Mr. Waitte will be pouring you some wine when you visit, but it could happen.

Tamber Bey has three levels of wine.  There’s the Vineyard Series, made from grapes grown in their vineyards in Oakville and Yountville.  Their best wines are in the Signature Collection, including Chardonnay, Pinot Noir, Malbec, Cabernet Sauvignon and a Bordeaux blend they call Vermejo.  All but the Pinot Noir are estate grown.  Finally, they have introduced a second label called Three Steeds.  (There’s a lot about horses here.)  Usually second labels are inferior to the proprietary label, but that doesn’t seem to be the case with Three Steeds.

About the horses: Mr. Waitte does own some fine Arabians, but the purpose of the Tamber Bey stables is to care for rescue horses that have been mistreated elsewhere.  We’re not horse people, but that seems like a pretty noble endeavor to us.

For the most part, Tamber Bey’s wines are powerful, with a great deal of alcohol in the reds.  This may not be to everyone’s taste.  Keep this in mind if you are likely to visit Tamber Bey after several other stops.

There is no place in Napa Valley, or for that matter anywhere in Wine Country, quite like Tamber Bey.  So come for the ranch ambiance and the horses and have some wine while you’re there.