In the north of Portugal you’ll find the city of Porto, on the northern shore of the Douro River, where it debouches into the Atlantic.  The city’s name has an interesting history.  On the southern shore there is today a town called Vila Nova de Gaia, but it Roman times it was Gallia.  As the town prospered, the Lusitanians (as the Portuguese were then known) needed more room, so they built a port, or portum in Latin, on the north shore – contemporary Porto.  Today the country takes its name from these twin cities: Portum + Gallia = Portugal. 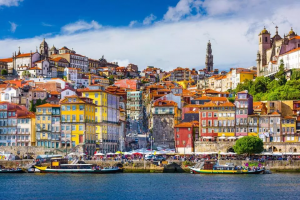 And as wine lovers know, it also gave its name to a wine we call Port.  That fact alone makes Porto worth visiting, but it has many other attractions as well.  Among these are the Cathedral, the Eiffel bridge (same architect as Paris’ tower) also known as the Luis I, the Clerigos Tower and the Douro Waterfront.  While there is much excellent dining around the city, a particular favorite is on the waterfront, the wonderfully named La Case da Filha da Mae Preta or The House of Black Mae’s Daughter.  If you go, order the giant prawns in garlic sauce; they’re not on the menu but it’s the best dinner you can have there.

And of course, there’s Port to be tasted.  When you check into a hotel, after you sign the register, they hand you a glass of Port.  Now, that’s civilized!

The wine is pressed upriver and shipped in tanker trucks to the wineries, or lodges as they are known there in Vila Nova de Gaia.  [In the past they came down river on boats called rabelos.  These can still be seen in the river near the south shore, but are no longer in use.]  In Gaia, they are aged in casks, barrels or bottles, depending on the style of wine.  You can taste away at the Instituto do Vinho do Porto, which is the counterpart of the solara or tasting room in Lisbon.

If you are on the Porto side in the evening, you will see the Gaia hillside light up with enormous signs of all the Port houses you ever heard of…and a few you haven’t.  Many of them have tours and tastings, during the day of course.  Perhaps the best tour is at Sandeman’s which is also the easiest to reach.  There is a small bridge (not the high Eifel one) that you can walk across the Douro.  Turn right on the Gaia side and Sandeman is a few hundred feet down the road.  You’ll get a great view of Porto as well.  Your tour will explain the differences among dry, ruby, tawny, colheita, LBV and vintage ports and then you’ll get to taste some of them. 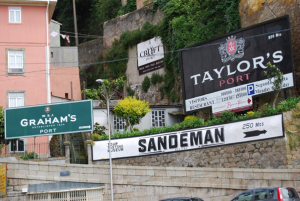 Other lodges are less easy to reach but the consensus position is that the wines are better.  Each has certain attractions.  Ramos Pinto has a museum of their history.  Calem, one of Lucie’s favorite Ports, offers a fado (Portuguese blues) performance along with your tour.  The more famous names, such as Grahams and Taylor Fladgate, focus pretty much only on the wines.  Many require appointments.  Some have restaurants.  It’s a good idea to read up before you go wine tasting there.

Another good idea is to remember that Port  is a fortified wine, meaning that it is enriched with neutral grain brandy.  That makes it quite alcoholic, typically 20% or more.  That’s less than in whiskey but a heck of a lot more than in table wine.  So don’t plan too many tastings in one day.  Enjoy the beauty of your surroundings so you get the most out of Porto and its twin city, Vila Nova de Gaia.

A year ago, Power Tasting published a Field Guide to Servers, a tongue-in-cheek series on the different types of people who serve wine in tasting rooms.  We added some tips on how to get the most out of your interactions with each type:

If you missed the series or just would like to re-read some of the descriptions, click your way to these “library selections” as they say at wineries.

The most noticeable aspect of the Northern Rhône valley, at least on the western side, is the terraced vineyards perched along the hillsides just above a string of villages. The villages themselves are little more than homes, stores and offices along a single road, the D1086.  In all honesty, the area is not very well oriented to tourism, other than wine tasting, unlike some locales in the Southern Rhône such as Orange, Châteauneuf or Gigondas.  Ah, but there is quite some wine to taste in the north and Yves Cuilleron makes some of them.

According to his web site (http://www.cuilleron.com/en/), M. Cuilleron’s family has run the winery for three generations; he has been in charge since 1987.  Their properties are located along the entirety of the Rhône Valley, from the Côte Rôtie to Costières de Nimes.  The winery itself is in Chavanay, just south of the better known village of Condrieu.  It’s a pleasant enough little building, located on the main road.  Other than a sign over the door… and his truck parked in front of his winery, there is no particular reason to expect fine wines within, except of course that wines are found in many little buildings in the area. 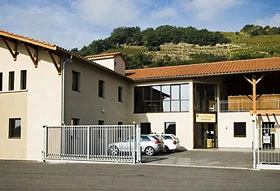 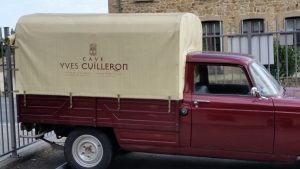 There are dozens of wines with the Cuilleron label: red, white and vin doux naturel (naturally sweet wines).  The tasting room is generous in opening quite a few, so that you can have a reasonably broad introduction to Northern Rhône wines, for although they make wines from both north and south, they are primarily known for their northern wines.  Other than in the white wine, Syrah is the principal grape of the Northern Rhône region.  On our visit, we sipped a Condrieu (white). two St. Josephs (including Les Pierres Sèches(dy rocks) one of their better-known wines, a Crozes-Hermitage, a Côte Rôtie and a Cornas.

A bonus of a visit to Yves Cuilleron is the art on display, portraits by a local painter, Robert Bourasseau.  M. Cuilleron is so taken by this artist’s work that he has dedicated a series of his wines under the label Cuvée Bourasseau.  The tasting room has numerous paintings on display, all of them showing a person with a wine glass in his or her hand. (The paintings were not for sale but a poster of them is.  Lucie loved the paintings so much that she bought the poster.) 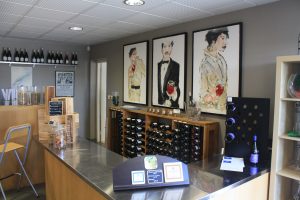 The tasting room at Cave Yves Cuilleron with paintings by Robert Bourasseau.

There isn’t much else to be found around the winery nor in the nearby villages.  The nearest places we know to find something to eat are in the town of Ampuis, in the heart of Côte Rôtie, about ten minutes’ drive north of the winery.  There are many wineries that you can drop in on, but be aware that almost every one closes for lunch from roughly 1:00 to 3:00.  You should eat too.  After all, you’re in a sector of Wine Country in France, so do as the French do.   Just remember that they may have a glass or two of wine with their lunch, and you’re going wine tasting afterwards, so take it easy.

A few nights before we began a trip to Tuscany, we opened a bottle of Italian wine that we had bought from a favorite wine web site.  At that point all we knew was that it was a Brunello,  had a beautiful label and that it was called Terralsole (“Land toward the Sun”).  Tasting it, we were very impressed and were glad we had more in the cellar.

Montalcino, in Tuscany, is famed for the wine first made in the castelli around the town: Brunello, made from 100% Sangiovese grapes.  The road system is radial around Montalcino; whichever direction you go you will find vineyards and wineries.  However, each direction also brings you to different terroirs, so the wines from each exhibit distinct characteristics and personalities.  As we drove down a road to the southeast of the city, we saw a sign that told us we had just passed the entrance to Terralsole.  One U-turn and five minutes later, we pulled up to the winery.  And no one was there.  Maybe, we thought, we were at the wrong building.  There was a nice looking structure at the top of a small hill, maybe that was it. 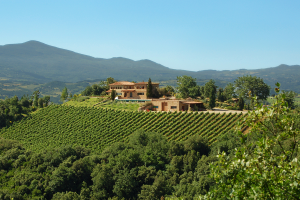 So Steve was delegated to climb up and see if anyone was at home, while Lucie stayed with the car.  After he shouted a few “Hello’s”, a young girl about six years old came out to see who was there.  Steve asked, “Is your mommy or daddy at home”, speaking slowly in hopes that she had a little English.  She shouted back into the house, “Mommy, there’s somebody here about some wine”.  Steve told her that she spoke perfect English and she replied, as only a six-year old can, “And I speak perfect Italian, too.”  Such was our introduction to the Bollag family, proprietors and winemakers of Terralsole (www.terralsole.com/).

Mom turned out to be Athena Tergis Bollag, a violinist, who had an appointment and was anxious to get away.  But graciously she told us that a) tastings were by appointment only b) there was no one able to serve us and c) maybe her husband, Mario, would accommodate us.  We were led back down the hill and met Mario Bollag, who proceeded to lead us on a tour of the property and the winery.

Mario then led us up to his office-atelier above the winery floor.  There he showed us sculptures and paintings, including the original used for the label of the wine we had drunk in New York.  It seems that Mario was also an artist and had in his earlier life been to Haiti, where he fell in love with the arts community there.  So he would sketch what he wanted for a label, send it to one of his Haitian friends who made a painting of it, which was then used for wine bottles.  Everyone benefited. 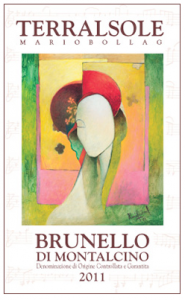 We learned that Terralsole comes from vineyards in two sectors of the Brunello region, which gives Terralsole’s Brunellos the taste we had liked so much.  Mario opened something unusual, a Syrah that we tasted together.  It’s marketed as a Super Tuscan, but really has more of a French character.  We never did taste a Brunello there, although we bought some to take home with us.

What do California, Australia, South Africa and New Zealand have in common?  They are all places where great wine is made and the people speak English.  If you are anglophone and your wine tasting travels take you to those places, you’ll have no problems.  But if you want to taste Barolos or Riojas or Burgundies or Zweigelts, you may have a few problems.  It helps that English is the world’s second language, so that you’re likely to find a server or guide who can talk to and understand you.

In most cases, larger wineries with commercial tasting rooms generally hire people who can work with tourists, which means that someone there will be able to converse (at least somewhat) in English.  However, much of the fun of wine tasting is meeting small producers of fine wines that you can’t find back home.  These are farmers and winemakers in important but less traveled corners of Wine Country.  We well remember sitting in an Italian vineyard owner’s kitchen, waiting for his daughter to arrive, so she could explain the wines he was making and serving to us. 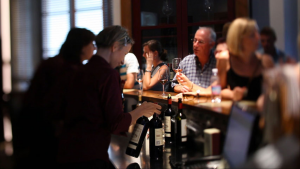 The tasting room at Ricasoli in Tuscany, where the staff speak English very well.  Photo courtesy of barone Ricasoli.

So if you are planning to taste the wines in regions where English isn’t always available, here are some tips.