You’ve decided you’re going to go wine tasting in Napa Valley.  Maybe you’ve never been or it’s been a while.  We’d like to offer some tips on getting the most out of your vacation by investing some time planning before you go.  Believe us, it will pay dividends. 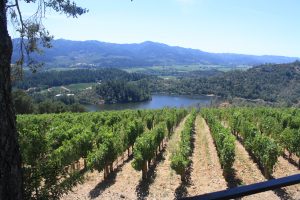 The view from Viader winery on Howell Mountain. 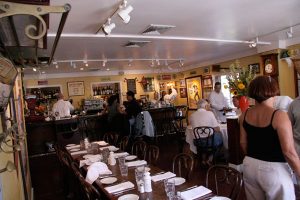 Have a great vacation and drop us a note while you’re there.

Almost as far north as you can go and still be in Napa Valley sits the Château Montelena Winery.  It’s in Calistoga and it has been there for a long time, though not always as an active winery.  It was established in 1882 by one Alfred Tubbs and to this day Château Montelena is located on Tubbs Lane (which unfortunately gave its name to the disastrous Tubbs fire in 2017).  The current history of the winery begins with the acquisition of the property, then in disuse, by Jim Barrett in the early 1970’s.  He was one of the winemaking pioneers who led the renaissance of Napa Valley at that time.

It is fair to say that Château Montelena was the original Napa Palace.  Palatial it is and was designed to be by Mr. Tubbs.  Legend has it that he imported architects and stonemasons from France to build his château.  It has been a working winery, a private home and now a tasting room.  This pseudo-Gothic masterpiece is certainly a reason in itself for visiting Château Montelena, but it is only one of the attractions there. 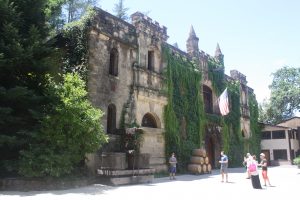 In a period when the château was a private home, beginning in the 1950s, the then owners created magnificent gardens in a Chinese style.  Today they are called Jade Lake and are a sanctuary for a variety of fish and wildlife.  Visitors are welcome to wander in the gardens and on a beautiful day, even with fellow tourists alongside, it is a source of peace and restfulness. 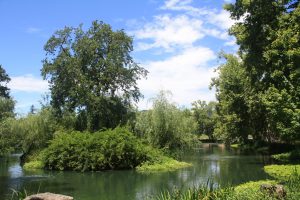 Oh yes, and they make wine.  Oh boy, do they ever.  For one thing, they were the winner in the Chardonnay category of the storied Judgment of Paris wine tasting in France in 1976.  They don’t let you forget this fact at Château Montelena; George Tauber’s famous book on the event is prominently displayed throughout the tasting room.

Not to take anything away from the current releases of their Chardonnay, we are more enamored of their reds, especially the Estate Cabernet Sauvignon.  They also make a Zinfandel that we have quite enjoyed in the past. 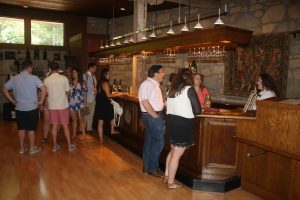 The main tasting room is an attractive stone and wood space, with a long bar and ample space for quite a few visitors.  There is also a secondary area used on busy days at the winery.  The servers have always seemed knowledgeable about Château Montelena’s wines although on occasion we have found a few of the servers to be a bit haughty.  For the most part, even on weekends, they seem eager to inform you as well as to pour wine for you.

Now, Power Tasting is not in the business of reviewing wines themselves.  We are all about the experience of going wine tasting.  That said, it is rare to find a winery that offers the combination of top-tier wines along with natural and architectural beauty.  It may take a little while longer to get up to Calistoga from San Francisco, but for anyone seriously interested in knowing the history and quality of California winemaking, a visit to Château Montelena is a must.

Most people who think of spending time in Wine Country visualize it in daylight.  That’s when the wineries are open for tasting and when the sunshine kisses the vines and makes the grapes grow.  If you are going to spend more than a day, then you’re going to encounter at least one night there.  In most parts of Wine Country, outside the principle cities and towns, there’s nothing to see or do because, well, it’s dark.

Famed for its restaurants, Napa Valley has a nocturnal side for visitors.  One of its two main thoroughfares, Route 29, is well lit and there are attractions that are also illuminated.  The smaller roads are only lighted up by passing headlights, which also creates an atmosphere rather spookier than that experienced by day.

Sunsets can be spectacular in Napa Valley.  The wide-open spaces between the Vaca and Mayacamas mountains create a backdrop for the setting sun that can be quite dramatic.  We think there must be something in the air there that brings out the best around 5:00 in the winter and 9:00 at the height of summer. 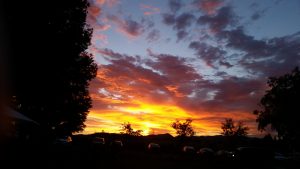 Sunset in Carneros, from the Etude winery.

Driving north on Route 29 you’ll pass a lot of hotels and commercial establishments at the widest part.  Where the road narrows, you can see the lights of Yountville to your right.  Popular restaurants such as Brix and Mustards appear on your left not much further on.  Of course, they’re there during the day as well, but their rapid appearance out of the dark is a reminder of what were once called roadhouses, gathering spots out in the countryside with hints of racoon coats, bootleggers and late-night parties. 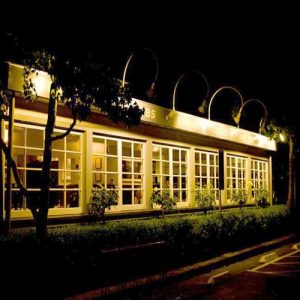 These days, the action is to be found in the towns such as Yountville, St. Helena, Calistoga and especially Napa Town.  The first three mentioned are really just villages, with one or two commercial streets including a few restaurants.  Besides restaurants (and some very good ones) the town of Napa has the additional nighttime advantage of a beautiful walk along the river.  The town leadership has refurbished the old buildings on the southern bank and erected a promenade.  Passing down the walkway adds a very romantic after-dinner touch.

Nocturnal walks outside the towns are probably not a good idea.  For one thing there are no sidewalks, so your only path would be in the roads themselves.  Now, this is California where nobody walks if they can help it.  So you’ll be traipsing along poorly lit roads. (Did we say, “poorly lit”.  For the most part there’s no light at all.) Because most drivers aren’t expecting to see pedestrians, there’s an appreciable danger in taking a walk in the back roads.  If you are intent on doing so, wear reflective clothing.

Napa Valley is a pretty magical place, day or night.  Because daytime activities predominate, not many give consideration to seeing it by starlight.  If you’re there, enjoy it. 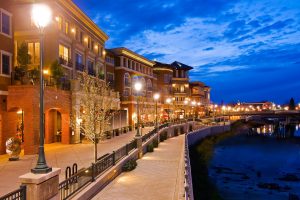 The walkway along the Napa River.  Photo courtesy of napawineestates.com

When you’re out wine tasting, travelling from winery to winery and taking the vineyard views, it’s easy to forget that real people live there, buying food and hardware, getting their clothes cleaned and generally living ordinary American lives.  When we go to Wine Country, we always try to see some of the local life as well as the wines.  That’s true overseas in places like in the city Bordeaux and the village of Montalcino, though those are tourist destinations in themselves.  In Napa Valley, it’s St. Helena. 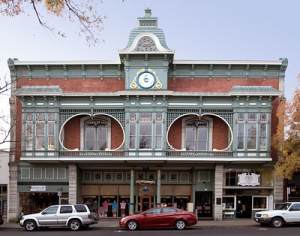 St. Helena has a unique charm.  We have found it a worthwhile to interrupt our wine tasting adventures to take an hour or two to look around this town.  A portion of the only street of note (Main Street, also known as Route 29 and also Route 128) is a registered Historic District.  There are several restaurants, a few tasting rooms (which we have never tried), and then the usual: a few grocery stores, clothing shops, a movie theater, jewelers and some offices.  In other words, St. Helena is just like everywhere.  Except there’s this architecture, with 34 buildings of note.  Particularly notable are the Richie Block, a fine Victorian structure built in 1892 and the St. Helena Star building, from 1900. 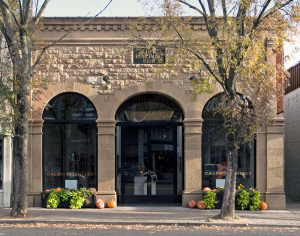 Then there’s this really neat hardware store (Steve’s, no relation) where we’ve often found something or other that was just what we needed and couldn’t find at home.  There was a nicer than usual champagne preserver, a salt grinder, some random cookware all at lower prices than at fancier cookware stores.

Many of the “downtown” restaurants are quite good.  We have enjoyed lunch at Market, which specializes in the classics of American cuisine with a bit of a Wine Country twist.  Sure, they have a burger, but the beef is from an “all-natural” butcher and the cheese is from a special farm in Modesto.  In fact, that summarizes St. Helena: It’s just like everywhere, except it’s not.

There is one eatery in St. Helena that is a must for visiting wine tasters.  Just south of the commercial district is Gott’s Roadside, the place for burgers and fries.  Oh, they have other things too, but stick with the Americana.  You sit outside, under umbrellas, and order from a window.  It   If you want to feel like you’ve gone back in time for a great burger, this is your place. 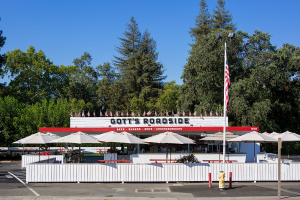 One nice thing about stopping in St. Helena is that you are very near to many of the wineries you might want to visit.  Beringer is just five minutes away by car (20 on foot).  Markham and St. Clement are just a bit further.  The grand buildings give evidence that St. Helena has long been an important town, even before wine became a major business in itself.