This is another in Power Tasting’s occasional series on great wine bars of the world.  Previous locations have included the Bounty Hunter in Napa and W.I.N.O. in New Orleans.

Generally, when Power Tasting recommends a wine bar, it is not primarily a restaurant with a bar in the front.  We make an exception for the Antica Bottega del Vino in Verona, Italy for a couple of reasons.  First of all is the name; it means the Old Wine Shop, so you know right from the beginning that wine is king here.  For another, the wine bar draws its own patronage distinct from that of the restaurant.  And finally, because the wine selection is so good. 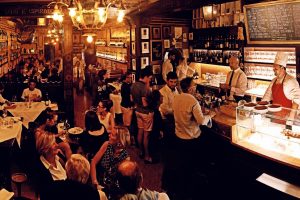 A few issues ago, we presented our impressions of the town of Verona.  It’s a charming little city with roots back to Roman times (and a great, still active arena) and is best known as being the home of Romeo and Juliet.  It’s also the jumping-off point for wine tasters visiting Valpolicella.  So you would expect that a Veronese wine bar would feature Amarone and other wines of the region.  And indeed, you can get some good Amarones and Ripassos.  But what makes Antica Bottega del Vino so special is that their list, written on a chalk board over the bar, includes wines from all the great wine making regions of Italy.  You can choose a Barolo, a Brunello, Nero d’Avola, Marche and so on and on and on.

Of course, there are many bars where you can find a long list of fine wines.  But in most cases, wine bars buy recent production and don’t have either the facilities or the finances to age their wines.  Antica Bottega del Vino is the grand exception.  Mostly, you’ll find wines with ten years or more on them, well-cellared and well-poured.  These folks appreciate wine and their customers have come to appreciate their knowledge and care.

And those customers are a part of the attraction as well.  Get to the bar a little before five, earlier than when most people leave work and before the diners arrive.  If you get there much later, you’ll have some difficulty getting a table in the bar, because the place fills up with Veronese, stopping by to sip, to nibble, to chat and be seen doing all the above before going home to spouses and bambini.  Unless you happen to speak Italian, you won’t understand the conversation but you’ll be wrapped up in an atmosphere that only a bar that first opened in 1890 can give you.  And if someone notices that you’re showing real enjoyment of the wines you order, he or she will want to know who you are, where you come from, what you do, why you’re in Verona and what you’re having for dinner.

We’ve never dined at Antica Bottega del Vino, but we have noshed.  The bar features many cicchetti (snacks), such as finger sandwiches, a meatball, a piece of cheese.  Just little things to go along with your wine.

And one last thing: it’s not very expensive.  For what you’d pay for a glass of plonk in New York, you could have a noble wine aged perfectly.  It’s almost enough to make a special trip to Verona.

There are some wineries that don’t offer you a lot of choice.  In Bordeaux, for example, custom, pride and winemaking laws mean that there are only one or two wines to try, the second label and the grand vin.  On the other hand, there are many (too many, in our opinion) vineyards that are raising all sorts of grapes, whether they are well accommodated to the terroir or not.  While there are some exceptions, wineries that grow Cabernet Sauvignon, Grenache, Pinot Noir, Chardonnay and Sauvignon Blanc all on their 20 acres can’t possibly make them all into good wines.  And many wineries that are more restrained in the types of wine they make have two or more tasting lists at different levels of price and quality. 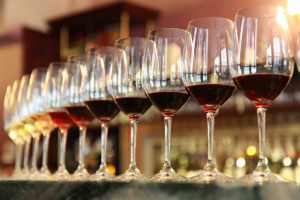 The best idea is to restrict yourself to drinking the best wines available.  But maybe you don’t know what’s the best, or you don’t feel like spending a small fortune for a small pour, no matter how great the wine.  Here’s a few tips on dealing with overwhelming choices.

There’s no getting around the fact that Napa/Noma in August is hot.  The average temperature in Santa Rosa is 82o, which many people would not consider too difficult to take.  But beware of the law of averages.  Nighttimes cool off quite a bit in Napa and Sonoma counties and the mornings can be foggy, humid and almost chilly even in mid-summer.  But when the clouds lift in the middle of the morning – the time you will likely be setting off to visit wineries – and into the afternoon, the temperatures usually reach into the 90’s and by 3:00 it’s not unusual to have the heat break over the 100o mark.

Now tastes in weather differ.  If you’re an Arizonan, these temperatures don’t sound too scary.  But if you’re a Canadian, for example, even the average daily temperature in August seems pretty hot to you.  So why go wine tasting in Napa/Noma in summery August? 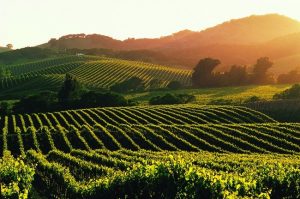 Perhaps the best reason is that August is the beginning of the harvest in this area.  Sauvignon Blanc is usually the first grape to ripen, with Chardonnay coming after that towards the end of the month.  The whole year in the vineyards has been leading up to this time, and there’s a burst of energy that even visitors can feel among the growers, the harvesters and the production line personnel actually turning the crop into wine.  It’s really fun to see.

Moreover, the vines are heavy with fruit, both white and red.  Yes, it’s interesting to see the bare branches of winter and the bud break of spring, but there’s nothing like seeing a vineyard with nearly ripened clusters of grapes just waiting to be harvested.  Power Tasting has said many times that one of the premier reasons to visit Wine Country, after the tastings, is to revel in the beauty of the vineyards.  And they are never so beautiful as when they are laden with grapes.

Another benefit of Napa/Noma is August is that it is not only grapes that are in season at this time.  California is America’s fruit basket and peaches, plums, strawberries, mangoes and much more can be found in the markets.  Between the wine grapes and the rest of the produce, you really do feel the bounteousness of Nature.

For many people, August is vacation time, so it can get crowded in Napa/Noma in August.  But a lot of those vacationers have their children with them and Wine Country really isn’t for kids.  Nonetheless, you will encounter many tasters with little ones in tow, from infants to teenagers.  Sorry to say, they do detract from the wine tasting experience a bit.

Again because there are so many people who enjoy wine tasting nowadays, there can be a lot of traffic.  There’s no gainsaying the many wonderful wineries along Napa Valley’s Route 29, which gets the most crowded.  Don’t avoid it, but do give some thought to when and where you intend to taste.  You want to be in the tasting rooms, not behind the wheel.  And again, weekends are always more crowded than weekdays.  You’ll find that the back roads of Russian River or the crossing roads at the center of Napa Valley are a little less traveled while at the same time a good deal cooler.

Don’t hesitate to visit Napa/Noma in August.  Take advantage of the best there and be forewarned about some of the drawbacks.

There is an on-going debate as to whether better wine is made on mountain slopes or valley floors.  There are enough great wineries, high and low, that the issue will probably never be settled.  But this much can be said: Mountain wineries offer better views.  So even if Chappellet didn’t make excellent wines – which they do – it would be worthwhile to take the drive up Pritchard Hill just for the sake of the views you’ll get. 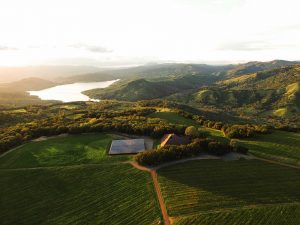 If you’re coming from the south, turn right on Sage Canyon Road in St. Helena on the Vaca range side of Napa Valley.  You’ll soon see the vista, not so much into Napa Valley but on the other side towards Lake Hennessy, gleaming off in the distance.  We have most enjoyed this view in autumn, when the grape leaves turn color.   Keep going and you’ll arrive at Chappellet, a towering wooden edifice which, if viewed from above, is shaped like the winery’s logo.  As you enter, you will enjoy the architecture of soaring ceilings and mellow wooden walls, ceilings and beams. 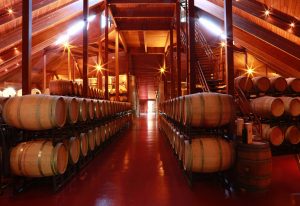 As with many wineries these days, Chappellet offers several different tiers of tastings.  Tours and tastings at Chappellet are by appointment only.  Some smaller and less well-known wineries say that but don’t really mean it.  Chappellet is a popular destination and so they do.  We have enjoyed the estate tour which not only includes a tasting in the barrel room but a tour around the vineyards (and more excellent views).  You start out with a glass of white wine and then are offered other wines as you go along.  At the end, you’re in the barrel room sipping Chappellet’s better known wines.  And if you know what to ask for, you may get a chance to try some of their more restricted releases.  Look for their Cabernet Franc which is really a Bordeaux blend, or more properly a California expression of a Pomerol blend. 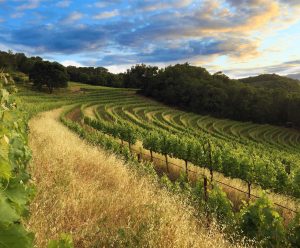 Chappellet’s guides/servers have always been quite knowledgeable on the occasions we have visited there.  Unless you pay for a private tour, you will be with other visitors.  This is not usually much of a drawback, but if you are quite knowledgeable about winemaking already you may find the tour somewhat elementary.  Wonky questions aren’t discouraged, but your tour mates may feel you’re slowing them down.  We have found that to be fair to everyone, it’s best to save these sorts of questions for the end of the tour, when you’re back inside and there is no need to move onto the next spot.

The late Donn Chappellet founded the winery in 1967, which makes it one of the pioneers of the current era of Napa Valley winemaking and one of the first to exploit the mountain slopes for planting vineyards.  Still family-owned, the Chappellets have demonstrated a commitment to quality for decades.  For the visitor, the combination of quality wines, vistas and history is hard to beat.