Some people are really crazy about Pinot Noirs from the Russian River Valley.  To be honest, there are some we like but overall we prefer Carneros, Santa Lucia Highlands and the Santa Rita Hills for American Pinot Noirs.  All the same, a wine tasting trip to Sonoma County would be incomplete without visiting the Russian River AVA.  Unless the eponymous river is raging in the spring, this sector has a gentle beauty as compared, say, with the majestic mountains of Alexander Valley nearby.

When you make that trip, make sure that you leave time to visit Martinelli (http://www.martinelliwinery.com/).  It will be either the first or the last winery you come to off of Route 101, Sonoma County’s main highway, depending on where you start. It’s an easy place to spot along River Road; it’s a big red barn.  And that barn says a lot about who and what Martinelli is.  Too much of NapaNoma wine making has become the province of big corporations.  A winery that has been in the same California family for well over 125 years gives you a reason to visit all by itself.  A big red barn is emblematic of a family of farmers and it is the antithesis of what have become known as Napa Palaces. 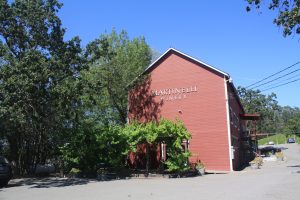 The tasting room inside is cool, dark and full of history, much of it that of the Martinelli family.  The sides of the bar are made from metal panels taken from an old locomotive. The bar itself is under wooden beams, reinforcing the fact that you’re in a barn.  For those who like to shop, there is ample opportunity in the tasting room, a bit too much for our tastes. The Martinelli sign advertising the winery also mentions its gift shop, which is unusual.  But all the knick-knacks don’t detract from the wine and wow, is there ever a lot of great wine to try. 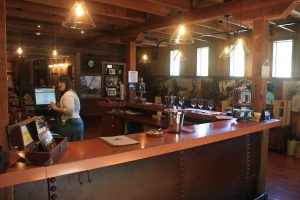 Essentially, Martinelli produces Pinot Noir, Zinfandel, Syrah and Chardonnay.  Tastes differ of course, but it is fair to say that all of their wines are of a high quality.  They grow grapes in nineteen vineyards, primarily in the Russian River Valley, of which they sell 90% of their grapes to other wineries.  So what you get to sip out of a Martinelli bottle is what they consider to be their best.

To get some idea of the variety of wines available in their tasting room, a quick perusal of current releases listed on their web site shows 24 wines.  We have found it worthwhile to focus on just one grape on each visit, to be able to sample the subtle differences in terroir that these wines represent.  That list of current releases shows nine different Pinot Noirs and seven Zins.  The demands of sobriety call for some degree of specialization on a visit.

The Martinelli family is rightly proud of their heritage and there are many stories they like to tell to elaborate on it.  One favorite is the name of one of their oldest, most famous vineyards.  It is on a very rocky, steep (60 degree) hillside.  The founder’s son was told that only a jackass would try to grow anything on that hill.  And so today, Jackass Hill produces some of Martinelli’s best loved Zinfandels.

A wine tasting visit to Martinelli will combine history and great wines.  Why would anyone want to miss that?

Wine is an art form.  It’s also an industrial process.  And it all starts with farming.  The art is something we understand.  The second we’ve been taught through books and winery tours, and sort of get.  But no matter how much we have read and heard about trellising, soil composition, canopy management and sun angles, we still don’t get it.  All we know is that vineyards are pretty.

We like looking at them from a distance.  We like getting close up, especially when the vines are heavy with grapes near harvest time.  Our photo files are replete with pictures of dangling fruit. and if you are lucky enough to be in Wine Country just before the harvest, you’ll want these pictures, too.  And we just like walking through vineyards. 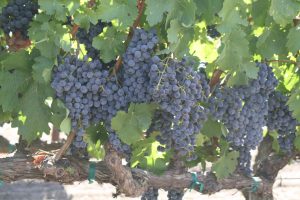 For one thing, you get a sense of the incredible variety in the way grape growers carry out their craft.  For example, in Beaujolais, they crop their vines close to the ground, whereas in California they are usually chest high.  In Burgundy, they grow their vines quite high, so that two visitors can lose one another if they’re not careful.  It’s something like the mazes that some corn farmers erect after their harvest.  And in Valpolicella, they grow their grapes so high that the vines are over a visitor’s head. 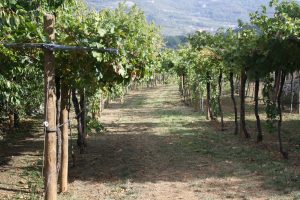 The vineyard of Quintarelli.Giuseppe in Valpolicella

Then there’s the sense of history you feel in certain vineyards.  There’s a little thrill you get knowing that wines have been made from the same produce you see before you, for years and years.  That might be only 45 years in Long Island (Castello di Borghese) or 450 years (Chateau Margaux).  And if you walk up the hill in Burgundy called the Corton-Charlemagne (where they grow grapes for a Grand Cru white wine) you are standing on ground owned by the Emperor Charlemagne, who lived in the 800’s.

Finally (and please don’t tell), if you’re in the vineyards at harvest time, you can sample a few grapes.  You know those grapes you buy in the grocery store?  They’re tasteless, sour things compared with wine grapes.  The more alcoholic wines are made from sweeter grapes, which have more sugar of course.  The grapes of Beaujolais (around 13%) aren’t shabby, but Zinfandels are small and often 14.5% or more and those grapes are super-yummy.

For some reason, the farmers are not wild about hordes of outsiders tromping through their fields.  Maybe they just don’t like tourists getting in the way of workers, raising a lot of dust and messing with the grapes.  So strolling through the vineyards is not always an activity appreciated by the proprietors.  However, in a previous vacation in Burgundy, we picnicked in a different vineyard every day and no one ever came to tell us to leave.  It was heaven!  In the next issue of Power Tasting, we’ll give you tips on how you can take a walk in a vineyard.

This article is the latest in Power Tasting’s irregular series on interesting wine bars around the world.  Previous issues have taken readers to locations in Paris, London, Copenhagen and Lisbon.

There is a street in Québec City called rue Cartier that is only five blocks long, but is the commercial heart of a sector that is very much Québecois.  Not the Québec of monumental hotels and 18th century architecture, but rather a reflection of the way the people of this French-speaking Canadian province live and think of themselves.  For example, there are five boulangeries, where you can buy the best baguettes in North America, and as many pastry shops that dazzle the eye as well as the palate.  There are trendy clothes shops, a French bookstore, two family-owned butchers, two pubs where you can watch all the hockey games and at least a dozen restaurants all spilling out into the street during the warm summer months.

And there is one wine bar, a “bar à vin”, called Petits Creux & Grands Crus (https://www.petitscreux.corsica), which translates roughly as “little snacks and great wines”.  While it is open year round, its indoor space is rather small.  PC&GC comes into its own after the last snows melt and before all the leaves fall, May through October. 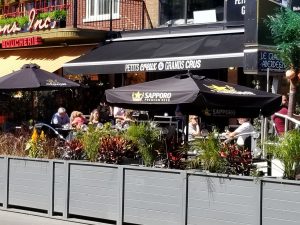 Now, Québec City is a very French town as opposed to Montreal, which is more evenly split between francophones and English speakers.  In the not so distant past, no one knew about rue Cartier except the locals.  Québec City has always had plenty of tourists but they generally stayed in Vieux Québec, the Old Town, and were not seen in the residential and commercial areas.  Today, you will hear English, Chinese, Italian and Spanish as you walk along rue Cartier (which doesn’t please Lucie, who is from Québec).  The wait staff at PC&GC are adept at both French and English and we have heard conversations in other languages as well.

With Québec’s French heritage, you might expect this wine bar’s list to be heavy in Bordeaux, Burgundies and Rhônes and indeed there are plenty of those on its rather extensive list.  But Marie-Pierre Colonna, the owner, is Corsican-American.  So the spécialités de la maison are wines from Corsica, that island department of France floating in the Mediterranean.  Its wines reflect its geography, with the sun producing big, flavorful, fruity wines in both red and white.  The Corsican rosé served at PC&GC looks more like a light red than a slightly colored white, as found in Provence. 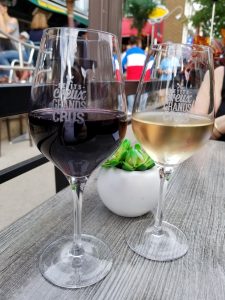 Many of the grapes in the Corsican wines are barely known this side of the Mediterranean.  There are reds like Neullucciu from the north of Corsica, Sciacarellu from the south and a white grape used there called Biancu Gentile. (Sometimes these grapes are spelled with an “o” instead of a “u” but M. Collona speaks in the Corsican dialect.)

The “little snacks” as advertised in the wine bar’s name aren’t really that small.  You can get boards with meats, cheeses, veggies or seafood but there is nothing much that you would call a nibble. They used to make their own potato chips that were served warm and very crusty but unfortunately they removed them from the menu.   There are also a few main courses, some of which echo the Corsican theme of the bar.

Despite the influx of tourists, rue Cartier is still a focal point for the people of the surrounding neighborhood.  One of the great pleasures of spending some time at Petits Creux & Grands Crus is watching the parade of the local people passing by.  Sure, in one way it’s the same mix of young and old, men and women you’ll see anywhere.  But these are the folks of Québec, with their distinctive history, beautiful language and joie de vivre.  So take a glass or two of wines that you’ve never heard of, much less tasted, and pretend for an hour or so that you’re a part of this wonderful Québecois culture. 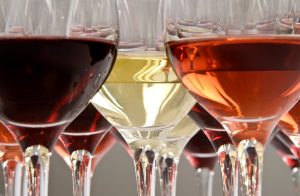