If you, like us, are from the East Coast, getting to either California or France is roughly the same hassle.  Once you have to get to the airport and wait for your plane, the difference between a six-hour and an eight-hour flight is not all that big a deal.  However, when you get off the plane in California, you’re still in the USA.  Everybody speaks your language and most things, aside from the vineyards, are just like home.  You can’t say that about a trip to France.

If the only purpose of your trip is wine tasting, the overall experiences of the two sectors of Wine Country are roughly equivalent.  The most famous regions – Napa/Noma, Burgundy, Paso Robles, Bordeaux, Santa Barbara, the Rhone Valley – will offer you many wines you might have heard of, if not already tasted.  While California has some out-of-the-way wine producing areas, such as Temecula or Amador County, wine is made almost everywhere in France.  And some of the less familiar locales, including Alsace, Beaujolais and the Languedoc, make world-class wines. 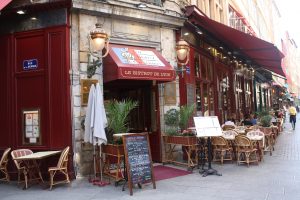 Lyon is known as the culinary capital of France.

It’s when you want to do something other than tasting wine tasting that France excels.  Yes, we love San Francisco and Los Angeles but they’re not Paris or Lyon.  There are few if any California experiences that can top a stroll along the Seine or eating onion soup at a sidewalk café.  Of course, it helps if you can speak French but honestly, it’s not essential.  Most French people can and will speak English.  They have the reputation for being arrogant and snobbish (as do New Yorkers) but we’ve never experienced any problems. (The nose in the air attitude of Parisian waiters is as much a part of the show as anything else.) 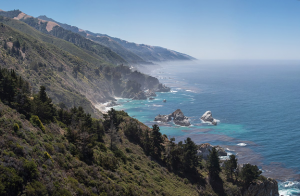 California and France both have attractions when it comes to natural beauty.  There’s an unmistakable charm to the French countryside. The grandeur of some parts of California are matchless.  The French Alps are stunning and Big Sur, Yosemite and the redwood forests are treasures.  Centuries of wars have left scars across France; earthquakes and fires have done the same in California.  If you’re travelling to see marvelous scenery (in addition to wine tasting, of course) both will offer you more than you can take in on any one trip.

You can get memorable meals in California.  French Laundry and Spago are temples of gastronomy.  But France!  Yes, the French are justly famous (or infamous) for small portions of unknown ingredients with rich sauces.  But there’s hardly a village in the whole country where you can’t get a perfectly roasted chicken that you’ll remember forever.  We mentioned onion soup, but did we tell you about pâté?  Or cheese?  Or cassoulet?  Or, or, or?  On the other hand, if you’re in the mood for Mexican, Chinese or Japanese cuisine you’re going to do much better in California.

Altogether, it’s an individual decision as to which makes a more desirable vacation.  If you feel more comfortable in familiar surroundings, choose California.  If you like the exotic, France is a better choice.  We’re in the latter category, but then we speak French.  Either direction, you’ll taste great wines.

It’s impossible to draw meaningful comparisons between wine tasting in France and California.  They’re both too large with too many wine growing regions to be able to say anything about one place without having a counterexample from another.  So let’s narrow the scope of the comparison to the two premier winemaking regions in each.  That would be Napa Valley and Bordeaux, although the people of Burgundy might make a claim as well.

We suppose that there were people who traveled to both regions for wine tasting in the 19th and early 20th centuries.  We can only speak to the wine tasting experiences of the last quarter of the 20th century onward.

Let’s stipulate a few differences up front.  They speak French in Bordeaux; their history goes back thousands of years and the restaurants all serve French food.  In Napa Valley, they speak English (and a lot of Spanish); the history there is hundreds of years old and the restaurants there serve cuisines from all around the world. 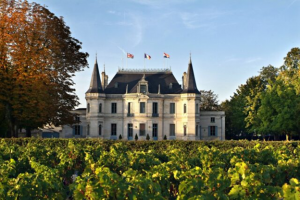 Château Palmer in Margaux, in the Medoc.  Photo courtesy of The Drinks Business.

Both are beautiful, but in different ways.  Napa Valley has a broad lowland with mountain ranges on both sides.  Bordeaux has three major vineyard areas: Macon on the left bank of the Garonne River, Pomerol/St. Emilion on the right bank and Graves/Sauternes south of the city of Bordeaux.  It’s easy to drive the length of Napa Valley in a few hours.  You need a few days to see all of Bordeaux. 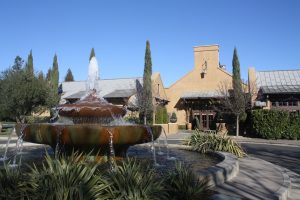 Napa Valley’s wineries have evolved from farmhouses to what we term Napa Palaces.  In Bordeaux they have real palaces, or at least châteaux.  There are few if any rustic wineries left in Napa Valley.  In Bordeaux many of the smaller producers don’t have the magnificent castles that the famous names have, although they all seem to call themselves Château This or Domaine That.

In our earliest travels to both, it was a simple matter of driving up to a winery and asking for a taste of their wines.  If money ever changed hands it was only a few dollars; in Napa Valley they would throw in a free glass.  There are still some places where walk-in tastings are available in Napa Valley.  Those in Bordeaux are generally lower quality houses, mostly in the town of St. Emilion.  The better Bordeaux tastings have long since been by appointment only.  This trend was apparent in Napa Valley too, prior to the pandemic.  Now it’s more of a general rule.

In Bordeaux, a tasting means blends featuring either Cabernet Sauvignon (Macon and Graves) or Merlot (St. Emilion).  There are some whites, most based on Semillon grapes.  Napa Valley tastings offer much greater variety: all the Bordeaux grapes, and those of Burgundy and the Rhône.

The wineries in Napa Valley are closer to one another.  You can easily visit five or six wineries and not travel more than a mile.  That’s just not the case in Bordeaux.  On the other hand, traffic is much worse in Napa Valley (especially on Route 29) than on the main roads in Bordeaux.

So finally, which region makes better wine?  That’s a question often debated at our dinner table and it has not yet been resolved.  You’d better decide for yourself.

Champagne is a sparkling wine.  If it’s really Champagne, the grapes are grown and the wine is made in the Champagne region of northern France.  Sparkling wine made in California isn’t called Champagne, with a few exceptions.  There are a few, such as Korbel and André that had been using the word historically, so they were allowed to continue using it.  (Many of us had our first taste of sparklers that come from those two producers, but if you’re into wine tasting, you probably haven’t had any of their wines for decades.)

Many of the better French producers have established wineries in California.  Among them are Moët & Chandon/Domaine Chandon and Mumm/Mumm Napa.  Taittinger in Reims developed Domaine Carneros in 1987, and the Napa Valley site is among the most visited wineries in the region.  Although the two wineries have the same ownership, they are operated completely independently. 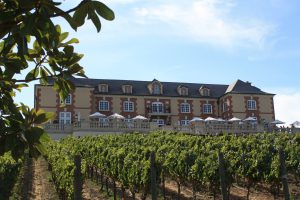 For the wine-tasting visitor, there is a broad comparison between the French and American wineries.  The French winery is essentially a factory complex on an urban street.  Grape vines are nowhere to be seen.  The site was an abbey in pre-Revolutionary times, but nothing remains of it, except its cellars.  Domaine Carneros is also a factory but it looks very much like a French château.  In fact, it is modeled on (but is not a replica of) the Taittinger family manse in Champagne, nowhere near the factory.  The California site is surrounded by vineyards and rolling hills, one of the most appealing vistas in Napa Valley.

The caves at Taittinger, showing the gate used by the monks in pre-Revolutionary Reims.

Both locations offer interesting tours.  At Taittinger, they walk visitors through the caves where they age their top Champagne.  You can see where the monks of the ancient abbey managed the wines in their time.  Even better, you can see a section of the cellars that were dug out by the Romans when Reims was called Durocortorum.  There’s nothing in California to beat that, but then a tour at Domaine Carneros actually gives you an understanding of how sparkling wine is made.

The tour at Taittinger concludes with a glass of Champagne; for an extra fee you can have Comtes de Champagne, their premier offering.  The California tour includes a tasting of several of Domaine Carneros’ sparkling wines, including their top wine, Le Rêve (“the dream” in French).  Better yet, even without a tour you can sit on their expansive veranda and order sparkling wine by the glass.  Sipping while taking in the view is quite a treat.

Taittinger makes only Champagnes.  Domaine Carneros also offers some excellent Pinot Noirs and have recently added a Merlot.  These still wines are also available for ordering at the winery.

The question remains: Which winery makes the better wine?  Domaine Carneros makes excellent California wines, but they’re not Champagne.  And Taittinger is one of the most reputed houses in the Champagne region.  If all you want is a loud pop and some bubbles, Domaine Carneros’ Estate Brut Cuvée will do quite nicely.  On the other hand, if you want to celebrate with the real deal, stick with Taittinger.

As mentioned elsewhere in this issue, we endlessly debate the relative qualities of French and California wines.  The famous Judgement of Paris tasting in 1976 established the world-class status of California wines and created the false impression that California makes better wine than France across the board.  Of course, the question of “better” is a foolish one; both make excellent wine (and some plonk, too).

If you’d like to play along with us in this game of comparing the two, it’s quite simple.  Just go out and buy some Californian and French wines.  Open them.  Taste them.  Reach your own conclusions.  Here are some tips on how to make the most of it. 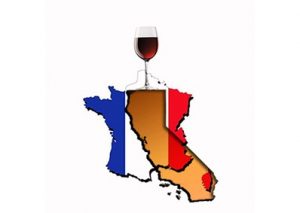