Although there have been a few exceptions over the years, we mostly go wine tasting as a couple.  Our tastes in wine are not exactly the same, but they’re close enough that we generally like and occasionally dislike the same wineries.  It has happened that we have visited Wine Country with friends or relatives.  Some have been quite knowledgeable themselves and so having them along was simple.

But there have been other times when our friends knew little about wine, had never been wine tasting before and wanted to experience it with us. The objectives (well, our objectives, if not theirs) is to have a pleasant day, to introduce your guests to a pastime that you are fairly passionate about and to give them a sampling of some good wines.  Such a trip offers some nice opportunities but there are some pitfalls as well. 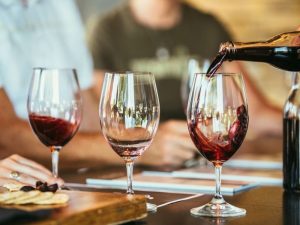 Here are some tips for taking advantage of the former and avoiding the latter.

The day will be a success if your friends enjoyed themselves and understood wine better than the day before.  It would be great if they decided to visit Wine Country again on another day.  But if they just added this day to their pleasurable memories and no more, that’s okay too.

On the eastern edge of the Minervois appellation in the southwest of France, there is a small village – a hamlet really – named Le Somail.  There are no vineyards immediately surrounding it, the nearest ones being only a few kilometers away.  When you are visiting wineries in the general area, leave yourself some time to visit this charming spot.

It has a certain Brigadoon quality, as though time had slowed down, if not stopped, in the 17th century.  That’s because Somail exists solely because it was at a convenient point between Toulouse and the Mediterranean Sea on the Canal du Midi.  It provided a stopping-off point for the boatmen and a harbor for their ships.

And so there were inns built, a bridge over the canal, a chapel, a few cafés.  They are all there today, some of them updated for the 21st century of course, with the enhancements done with a dash of French élan.  There are many boats, called péniches along the canal, and vacationers with rentals continue to steer their way (a bit shakily in some cases) under the ancient bridge.

The bridge is festooned with pots of flowers and offers a view of the hamlet and its boats.  One near to the bridge is quite a sight.  It’s a floating grocery store, good for a few provisions for the boaters and croissants for the locals in the morning.  It, too, hearkens back to another era.

The Epicerie Flottante, or the Floating Grocery Store

A good idea is to save your visit to Le Somail for lunchtime.  There is a row of outdoor cafés stretched along the southern bank of the canal, several of which have quite a reputation in the region.  Steve had one of the specialties, frog legs in a garlic cream sauce.  It was particularly delicious and would surely have been enough for two, except that Lucie doesn’t eat the little hopper sand could not even look at him eating them.

The southern bank also has all the requisite craft shops and galleries that seem to pop up wherever tourists gather.  They’re fine, but really no better than all the other sun dappled villages in the south of France.

On the other side of the bridge from the restaurants are several small hotel/guest houses and restaurants that offer fancier fare than the previously mentioned cafés.  The old chapel is worth a glance as well.  And there is a truly unique attraction: the Librairie Ancienne (the Old Bookstore) which claims to have 50,000 books, surely an undercount.  Of course, most of them are in French but there are plenty in all languages.  There are marvelous picture books to thumb, rare books to stare at under glass, comics, kids’ books, lithographs, engravings, antique maps and more.  If you are a bibliophile, you could get lost in there forever.

A partial view of the interior of the Librairie Ancienne

You can see all there is to see in Le Somail in an afternoon, lunch included, or you can stay for the night and really get the feel of the place.  It does come down to a choice, wine tasting or soaking up the atmosphere.  We chose the former, but not without a little twinge of regret as we pulled away.

Vino Nobile de Montepulciano occupies an unusual place among the wines of Tuscany.  It is not as well known as Chianti, nor as esteemed as Brunello, as trendy as Maremma nor as expensive as Bolgheri.  But the Noble Wine is quite ancient, well respected and very delicious, in our opinion.  If you want to really learn about it, you have to visit the town of Montepulciano, the name of which causes considerable confusion.

There is also a grape called Montepulciano, best known in the form of a different wine, Montepulciano de Abruzzo, from the section of Italy east of Rome.  That wine is hearty, a bit rough and very widely available.  Quite often if you simply order a glass of red wine in an Italian restaurant in the US, you’ll get Montepulciano de Abruzzo.  The wine from Montepulciano is Vino Nobile.  If you visit the town, you’ll find many enotecas where you can try the local wines and also several tasting rooms from some of the better producers.

We recommend that you walk all the way up the hill to the Piazza Grande, home to the cathedral and the imposing city hall.  And tucked into a corner of the square is a stately palazzo where you can taste the wines of Contucci.  This was not our first encounter with these wines; we had ordered them in restaurants in both New York and Siena.  So the enjoyment we had in the elegant tasting room was in learning about the range of the wines that Contucci produces: notably several different Vino Nobiles, a Rosso de Montepulciano, and a Vin Santo dessert wine.  However… 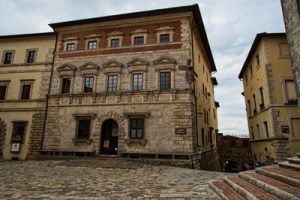 The Contucci tasting room on the Piazza Grande in Montepulciano. Photo courtesy of Cantine Contucci.

If you go down the hill at the same corner of the piazza you will almost immediately see a door with a big sign above it announcing the Cantine Contucci.  No disrespect to the fine building on the piazza, but this is the place to visit.  Here you get a much more rustic and warmer welcome and you see the caves where the wines are aged in huge oak casks. 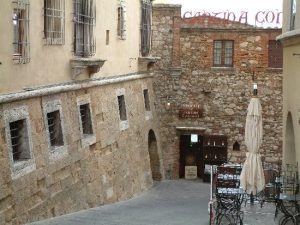 The other location to taste Contucci wines.  Photo courtesy of tripadvisor.it.

You will learn about the history of the Contucci family (over 1000 years in Montepulciano), their role in the development of Vino Nobile (attested in the 18th century), the popes who have visited and how Vino Nobile is made.  It has to be made with at least 70% Sangiovese (in Chianti it’s 80%) but then they mix in other local grapes such as Canaiolo Nero, Mammolo or Colorino.  Just to confuse matters further, in Montepulciano Sangiovese is called Prugnolo Gentile. 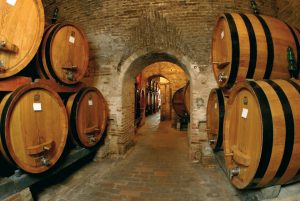 We told the nice gentleman who was pouring wine that we had tasted his wines at the palazzo up the hill and he said we should just try them again.  We objected, he insisted and, oh well, why not.  If you want to combine good wine, good stories and some interesting history, a stop at the Cantine Contucci is just your thing.

Let’s face it: it’s hot in Napa/Noma in July.  Of course, it’s hot everywhere and if you like it that way then it’s no problem.  We are split on the matter, so while we have been there in the height of the summer, we don’t go at that time very often.  The afternoon temperatures are generally in the 90s and it’s scant consolation that in other grape growing areas further south the 100s are regularly reached.

There are other drawbacks as well.  July 4 weekend brings crowds and at this time of the year, the crowds often mean tourists with children.  The roads are jammed and in many cases so are the tasting rooms.  So why go in July?

Because the days are long.  Even though the wineries are closed by 5:00 or earlier, you still have time to laze by the pool at your hotel, visit a state park or just enjoy strolling in the pretty towns. Some wineries, especially those with a view, take advantage of the lengthy daylight and stay open later for special events.  We well remember evenings at William Hill Winery (https://www.williamhillestate.com/estate#our-winery), sitting in comfortable Adirondack chairs with a bottle of Chardonnay admiring the view in the approaching dusk.  (Of course, you have to buy their wine to take advantage of their grounds). 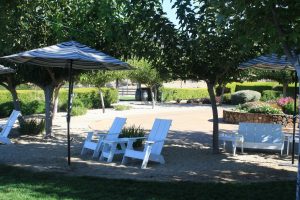 There are some pleasures only available in the summer months.  For example, the Santa Rosa Wednesday Night Market is open from May to August and the fruits and vegetables reach their peak in July.  There’s music, barbecue and a chance to meet the locals.  July also brings music festivals in the parks in St. Helena, Calistoga and Santa Rosa. 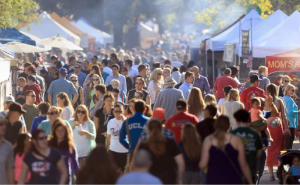 July can lay claim to being the month when the vineyards are at their most beautiful.  It is the month in which veraison begins, when the red wine grapes attain color.  It can be quite stunning to see the clusters of grapes – some green, some purple – giving promise of the harvest to come.  Each month has its own beauty, to be sure, but there is nothing quite like seeing the vines heavy with fruit.  Earlier in the year, there are only tiny berries.  Later, the fruit is dropped or picked.

If the temperatures are your bugaboo, take advantage in July to go wine tasting in the cooler, higher elevations.  A case can be made for the quality of mountain wines over those made from fruit grown in the valleys, so taste up there and avoid the highest temperatures.  We remember a summer tasting at Storybook Mountain Vineyards (https://www.storybookwines.com/), in the very north of Napa Valley, when we were positively shivering in their caves.

If you do visit Napa/Noma in July, you’ll enjoy wine tasting most if you go on weekdays and make appointments for tastings on the weekends.  You’ll also get a better price in some hotels on weekdays, but prices will still be high compared with those in winter months.  Heat notwithstanding, there are many pleasures to be had in Napa/Noma in July.