Often when we are in a winery’s tasting room, we ask the servers to show us the bottle.  Of course, it’s not the bottle we want to see; they’re all pretty much the same.  (Actually, that’s not true.  There are Bordeaux bottles with round shoulders and Burgundy bottles with sloping ones.)  What we really want to see is the label, or actually two labels: one on the front of the bottle and one on the back.

The servers usually look at us quizzically.  “Why?” they seem to be asking, but they do anyway?

So here’s the answer to their question and some advice on how you can take advantage of the labels as well. 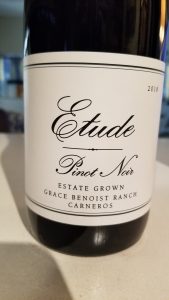 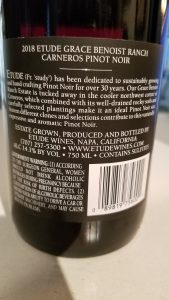 So why do we ask to see the label when we’re wine tasting?  Because it makes us more informed about what we’re sipping and what we might be buying.

One of the basic tenets we follow at Power Tasting is that we go to taste wine, not drink it and certainly not drink it to excess.  In our travels, we have met some people in tasting rooms who have failed to follow that rule and they were the worse for it.  But if you pace yourself, have breakfast and a hearty lunch, you may from time to time allow yourself what the French call an aperitif and the Italians an apertivo. (In the United States, we just call it a drink after work.)

One of the pleasures of an aperitif in Wine Country is that if you choose the right place to have one, you get to share the space and the experience with the people of the area.  You can just go to the first bar you come across.  If it has a bright neon sign in the window advertising Budweiser, you probably won’t be sipping a delicate Chardonnay.  But you very well might get a pint of one of the brews made in the area and that can be a pleasure too.  And you might be drinking next to the fellows who till the vineyards and pick the grapes that you’ve been trying that day.  If you don’t recognize the names of the ales on draft, ask the person next to you at the bar.  The worst that can happen is he’ll ignore you; the best is that you get to meet someone who’s in the know. 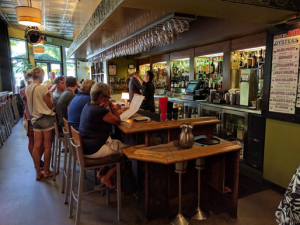 Many times we’ve taken a glass of wine before dinner at a restaurant other than the one we plan to dine in.  It’s a way to get to see more gathering spots and in some cases to familiarize yourself with the ambience of a restaurant before trying it for a meal.  You may be seated next to other tourists or you may get to meet the people who make the local wines.  If the latter, keep a polite eye on what they’re drinking.  It’s probably not their own because they are surrounded by it all day.  You can learn a lot from what the knowledgeable people of the area are having.

Strolling around the Piazza del Campo in Sienna.

The best way, by far, to enjoy an aperitif is to take it at a café in France or on a piazza in Italy.  We remember with much warmth sitting under the plane trees in front of the Bar Central in a tiny village surrounded by vines, while the piped music played French (and Quebecois) songs while the businesspeople and shopkeepers stopped by for a pastis or a glass of whatever was just growing a mile away.

Or watching the sun decline over the rooftops and steeples surrounding the big piazza that’s in every Italian town.  Half the town would take a glass with us, in order to watch the other half of the population indulge in what they call the passeggiata.  That’s just a walk around the square but it’s so much more.  It’s a chance to see the locals enjoying who’s out and about and to be seen being out and about.

Ah, yes, it must be 5 o’clock somewhere.

Toulouse is not a winemaking city.  It’s the center of France’s aerospace industry, with the headquarters of Airbus there.  But it is surrounded by regions that do make wine, albeit not the most famous in France.  There’s Gaillac to the north, Madiran to the south and Minervoix, the best known, to the east.  It also has history and architecture and food, which makes it well worth visiting when you’re travelling for wine tasting.

The Romans called it Tolosa, and when the city of Rome was overrun by the Visigoths in 410 A.D., the Romans gave the invaders the southwest of France to get them to leave their city.  Toulouse was their capital as it was 800 years later for a large population of pre-Reformation heretics known as the Cathars.  These people were wiped out but the echoes of Catharism are still felt throughout the region. 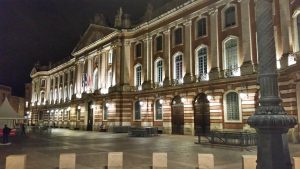 The current-day toulousains are justly proud of their history, but are more involved in 21st century living than in the past.  For the visitor, it is preferable to sit in their main square, the Place du Capitole, dominated on one side by a building that is part city hall and part opera house.  The other side of the square is lined with cafes, under broad umbrellas.  There you can sit and eat the local sausages, which are the envy of the rest of France, along with a bottle of local wine. 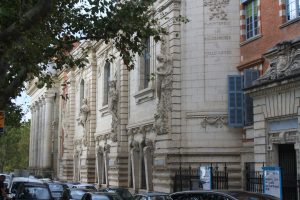 Grand buildings along the Garonne river.

Then take a stroll along the banks of the River Garonne, which starts in the Pyrenees and ends up in Bordeaux (you may have heard of their wines) before debouching into the Atlantic.  There are numerous grand buildings once erected by the elites, mostly in the 19th century.  Not far is what little is left of old Toulouse, since much of the city was destroyed in the many wars that beset the region.

The Canal du Midi begins in Toulouse and connects it with the Mediterranean.  Once a commercial waterway, the canal today is mostly navigated by tourists who get aboard the boats called péniches and visit the many picturesque villages along its banks.  If you don’t want an extended trip, you can take a tour that just goes around Toulouse’s part of the canal for a few hours or, as we did, take a day trip about 20 km. away and back.

You cannot visit Toulouse without indulging in its greatest contribution to French gastronomy: cassoulet.  Now the city’s claim to this dish is disputed by the people of the town of Castelnaudry along the canal to the east and the Gascons further north.  This hearty combination of white beans, confit de canard (duck) and the aforementioned Toulouse sausages has become available in many North American restaurants, but we can assure you that the real thing in the real place can’t be beat.

Power Tasting doesn’t usually get into restaurant reviews, but we have to tell you that we found that Restaurant Emil serves the best cassoulet in town.  Even more, you can buy a large can of it there, enough for dinner for two, put it in your suitcase and have it when the cold winds blow back at home.

There actually is a fellow named J. (for Jerry) Lohr.  He began making wines in California’s Central Coast back in the 1970’s, first in Arroyo Seco and then in Paso Robles.  He also owns a vineyard in Napa Valley but the main production comes from the center of the state.  J. Lohr has two tasting rooms, the original one in San Jose and a newer one in Paso itself, on the less artisanal east side of Route 101. 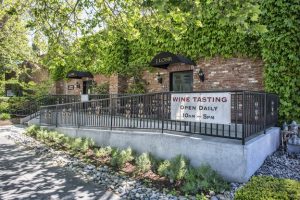 The San Jose site is on a city street, just off a major boulevard.  We’re fond of in-town tasting in places like Healdsburg or Calistoga, where there are several tasting rooms you can walk to.  But finding one in a city of a million people is neither bad nor good, but it is definitely unusual.  For one thing, there’s no place to park; you just find a spot in the street.  For another, there’s no indication that you’re in Wine Country.  The tasting room just stands alone.

It’s a pleasant, brick building covered in vines.  Once you enter, it’s like any tasting room anywhere: a long bar, some tables, wines on display.  And there are quite a few red and white wines available for tasting, that do show off what J. Lohr wines are all about.

And what they are about is, for the most part, easy accessibility.  You may already be familiar with these wines from a local wine shop or on a restaurant menu.  Many are inexpensive and are appropriate for casual drinking.  So why go out of your way to taste them?

The reason is that like many wineries that make their living in the mass market, they also have some wines that defy your expectations.  This applies to J. Lohr.  Yes, there are Chardonnays and Cabernet Sauvignons available for under $15.00.  But there are also single vineyard varietals including Pinot Noir from Santa Lucia Highlands and Cabernet Sauvignon from their vineyard in Napa Valley.  Even these, by today’s standards for such wines, are relatively affordable.

And then there are a few of J. Lohr’s wines that are clearly intended to show what this winery is capable of.  As with other makers of widely sold wines, it’s a pleasure to find out that their winemakers have the talent – and the grapes – to make fine wine.  Power Tasting is about wine tasting, so we’ll leave it to wine critics to say just how good J. Lohr’s top wines are.  We found some of their Signature series wines to be quite enjoyable and certainly didn’t consider them to be casual.

We were in Silicon Valley on business and took a little side trip to San Jose to visit this tasting room.  We wouldn’t recommend a special journey there, but if you are in the area it’s worth a stop.  One of the pleasures of wine tasting is surprises, finding something you enjoy that you didn’t even know existed.  We can’t promise that all their best wines will be available for tasting when you go, but there will probably be something you’ve never tasted before.  Finding the top-end products of wineries you only thought of as making picnic wine is a very pleasant surprise indeed.