There are some wineries in Napa Valley that are intended to awe their visitors.  They may have long histories, or architecture designed to replicate castles and temples, or they’re highly modern glass palaces.  Frog’s Leap Winery (https://www.frogsleap.com/) has the history, having been established in 1980.  It has the grapes, much of which they sell to other winemakers.  What it lacks is awesomeness.  It was designed and built to make visitors feel like they’re going to visit their country grandma, albeit a grandma with money and good taste. 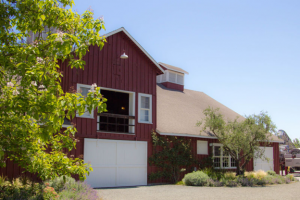 The winery building itself still looks like a barn, a very big one.  It’s painted the shade of red that seems to be reserved for barns.  You can take a tour and still see all the equipment and the barrels, but we think you’ll be drawn back to the visiting area.  Of course, that’s where they serve the wine.

While Frog’s Leap makes a broad selection of red wines, it seems to us that they’re best known for their white wines. Maybe that’s because their Chardonnay is so widely available in wine shops around the country.  Taking nothing away from the Chard, we’re impressed that they still make a Chenin Blanc, which used to be much more prominent in Napa Valley. 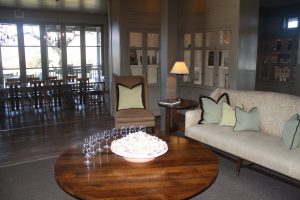 These days of pandemic-induced changes, all of Frog Leap’s tastings are seated affairs, by appointment only, out on the lawn.  In better times, both in the past and just ahead, tastings are also seated, in a parlor where you perch yourself on a settee.  Now, settee is a word your grandma may have used and it’s that sense of old-style hominess that is for us the premier attraction of this winery.  You feel like much more than a customer; you’re a guest. 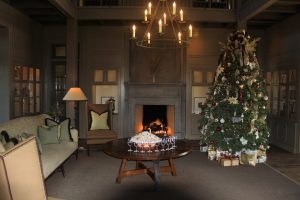 This feeling is reinforced at Christmas-time.  There’s always a beautifully decorated tree erected in the parlor.  It puts you in a holiday mood as soon as you walk in the door.  They’re not going to offer you egg nog; you’re limited to wine.  But there is a sense that you ought to leave some milk and cookies behind when you leave.

Now don’t get us wrong.  The wines are modern: crisp whites and robust reds.  Unlike many Napa Valley wineries, including many that are quite nearby, Frog’s Leap still making wines at a price point that the average person can afford on a regular basis.  Nothing among their recent releases costs an amount that requires three digits and that’s quite okay with us.

Oh, and about the name.  We always thought it was a play on Stag’s Leap and that may indeed be the case.  But according to the people at the winery, back in the ‘70s, the location was a frog farm.  A frog farm?  Now, John Williams, founder of the winery, was working at Stag’s Leap when he bought the property.  So believe whichever story you prefer.

Nestled in the rocky area of southern France known as the alpilles, or the little Alps, is the village of Les-Baux-de-Provence.  In the valleys below are vineyards making red, white and rosé wines that in recent years have received AOC status under the name of the village. 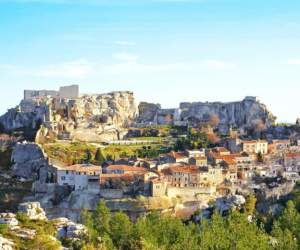 The village itself is a small gem, a UNESCO world heritage site.  It has been occupied for a thousand years and the local people have maintained its medieval character to this day.  It was once a fortress and the mighty walls are still there for you to see and walk along.  You will see it as you drive up through the valley and you’ll be hard put not to gasp in delight.

The ruined building atop Les Baux is the Château, which was the home of some renegade princes and was torn down, rebuilt, and torn down again as the fortunes of war and politics swayed over the years.  By the 19th century Les Baux was pretty much abandoned.  Then they discovered an ore nearby that contained aluminum and called it bauxite.  The mines are depleted now, but by the time that happened, the tourists had discovered the village.

Today, the 400 or so residents of Les-Baux-de-Provence are joined by thousands of visitors each year.  It is a great place to wander through ancient streets, walk the walls and stop for a meal.  There are many cafés and restaurants, where you can have typical French meals as well as some gourmet fare.

The remains of the Château are the most visited attraction and you will have to contend with the tour buses that deposit their passengers there.  It is worth seeing, if only for the views across the alpilles. The most notable site in the village below is the 12th century Church of St. Vincent.  It’s not a magnificent cathedral but rather a simple village church.  It’s simplicity belies many notable reasons to visit the church.  The windows are modern glass, a gift to the people of Les Baux from Prince Rainier of Monaco.  There are also modern murals of Provencal shepherds celebrating Christmas.

Down below the village, hidden amongst the rocks and vineyards, is the Relais & Château Hôtel Baumanière that has merged with the neighboring hotel La Cabro d’Or,  a jewel in the repertory of this prestigious hotel chain.  One wonderful memory of the three Michelin stars restaurant in this hotel is being served a steak à la moëlle.  This is a New York strip topped with beef bone marrow with a small bone filled with marrow on the side.  They recommend removing the marrow with a tiny spoon they give you.  To this day, we still salivate when we think about this.

It is Christmas that really defines Les Baux.  Each year, on Christmas Eve, the villagers form creche vivante (or living creche) around the altar in St. Vincents.  The villagers dress in quaint costumes and they lead their farm animals into the recreated manger.  It is unlikely that you’ll ever see the ceremony; it’s for the people of the village, not visitors.  But you can see the villagers preparing for midnight mass and realize that the waitress and the store clerk you meet are probably members of the touching statement of faith in the church. 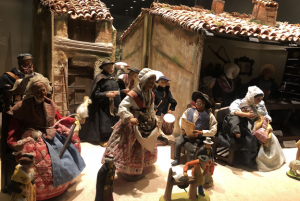 There’s another Christmas tradition that comes from Les Baux.  Many people in America and elsewhere decorate their homes with miniature houses and people made of porcelain.  These are called santons.  Perhaps the people who treasure these delicate pieces don’t realize it, but the village they’re recreating is in fact Les-Baux-de-Provence. There’s even a museum of santons there.  Yet another reason to visit Les Baux when you’re wine tasting is to collect some of these miniatures from the place where they originated.

A few years ago, Power Tasting ran an article called “Rainy Day Tasting”.  It provided tips on how to enjoy yourself while making the best of bad weather.  If you should be travelling in wine country when it gets cold, there are some of the same considerations to keep in mind but also a few that are unique to the winter months.

Of course, our mental image of Wine Country contains bright blue skies with grapes hanging heavy on the vines.  Very few wine making areas are immune to cold weather and many depend on it for various reasons.  Canadian wineries use the freezing cold to make their famous ice wines.  In most others, a period of dormancy is the basis for a finer harvest the next summer.

If you are visiting Wine Country from late November through March, here are a few tips to keep in mind.

Have fun tasting wine in the cold, both by taking extra precautions and taking advantage of winter’s special treats.

December’s weather is very unpredictable in the Napa Valley and Sonoma County, which we elide to be Napa/Noma.  We have been there at times when it is absolutely springlike and on other occasions we have frozen in temperatures much colder than that which we left behind in New York.  So before you come, by all means check your favorite weather app to learn how to pack. 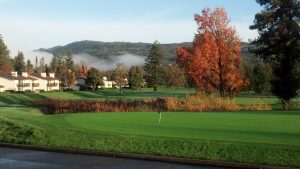 A chilly December morning just off the Silverado Trail.

There are many advantages to a visit in December and a few drawbacks.  It’s a rather relaxed time for the local folks.  The hardest work of the harvest is over and the new wine is sleeping soundly in barrels.  If you’re taking a tour, you won’t get to see people actually making wine (come in September and October for that) but on the other hand, you’ll be able to see all of the winery.  It’s not safe to traipse around when the destemmers and fermenting tanks are in full operation, with workers busy everywhere.

The big plus is the celebration of the holidays.  Many if not all of the wineries decorate for Christmas, some rather splendidly.  We can recommend Robert Mondavi and Beringer in Napa Valley and Arrowood in Sonoma County for the attractiveness of their displays.  Wine tasting is a rather festive pastime by itself; it gets downright merry at Christmas.

In addition, many of the wineries have private parties at this time of year, often on the first weekend of the month but later if that weekend is early in a given year.  Most of them are for their club members and are often called “pickup parties”.  The members from nearby are expected to pick up their December shipments in person and they get a little extra.  If you show up and you’re not a club member, they will almost never shoo you away.  On those days, they normally have their best wines available for tasting.

Also, many wineries hold fancy dinner parties for their club members, usually for a stiff price.  If you’re in a mood for a banquet dinner – always with great wine – you can join one club before you go and then sign up for the dinner.  Many of them sell out early, so give yourself some time in advance if you choose to do this. 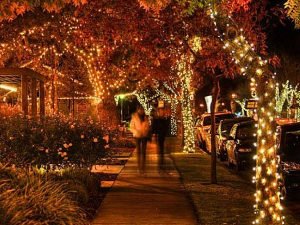 Yountville at Christmas.  Photo courtesy of The Wine Stay.

Some wineries have rather extensive (and often expensive) gift shops.  What better time to shop for gifts than December?  The shops are extensively decorated and of course many of the items are Christmas-themed.  Among the best are Mondavi and Beringer, once again, but also Darioush and Rubicon.  Moreover, the same can be said for the towns as well, where they are selling things to the local people, not just the tourists.  (Yountville is especially beautiful at this time of year.)  Among things we have bought over the years have been a gilded grape leaf to hang on a sturdy branch of a Christmas tree and a wreath made of grape vines.

Of course, you may be rather cold if you visit Napa/Noma in December, but the crowds will be sparser (except on party days).  Hotels are more available, as are restaurant tables.  With much of the previous release’s wines already sold, you may have some difficulty tasting your favorites, but consider that a chance to discover something different.