Preston (www.prestonfarmandwinery.com) isn’t like other wineries and that’s because Lou Preston and his wife, Susan, aren’t like other winemakers.  The Preston winery is…different, verging on odd and definitely unique.  They’ve been making wine there since 1975 and once were into some serious production.  And then in 2001, Lou decided he’d rather be a farmer as well as a winemaker and cut down to 8,000 cases a year.  The land that wasn’t left under vine was used for olive trees, grains, vegetables and lambs.  Lots of vineyards used to be farms; only Preston that we know of has a farm where there were once grape vines. 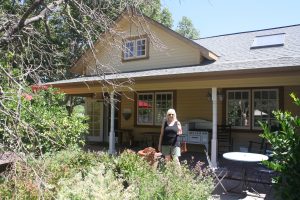 There are many reasons why a visit to Preston is worthwhile.  For one, the winery is very intentionally in touch with the history of Sonoma County.  The building itself looks like an old farmhouse, with clapboard sides and pitched eaves on the roof.  The tasting room is functional and decorated with farm implements, books and the occasional cow horn.  That latter is because everything at Preston is organic.  (The cow horn is used for…well, it’s a long story.) 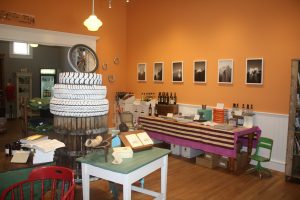 The grounds are a well-kept garden, much as you’d expect for a visit to your rural grandparents, if you ever had them.  There are also picnic grounds in a wooded area, so stop at the Dry Creek General Store on your way to bring lunch.  But be sure to bring extra, because you will have to feed some of the many importunate cats who prowl the grounds.  After lunch or your tasting, you can play a little bocce on their court.

Thankfully, Lou didn’t eliminate wine altogether and we always come home from a visit with a supply of bottles.  In the pre-farming days, Preston made an inexpensive red Rhône blend called, cleverly enough, Faux.  It was widely shipped so we never bought it at the winery because we could get it at a local wine shop back home.  In its place today is a powerful blend of Syrah, Mourvèdre, Cinsault, Grenache and Carignan, called without pretension simply L. Preston, which is stenciled on the side of the bottle…and nothing else.  Did we mention that Preston Farm and Winery is a bit eccentric?

As may be seen, the specialty at Preston is Rhône grapes.  The partner to L. Preston is a white blend called Madame Preston, with a similarly simplistic label.  It consists of Roussanne, Marsanne, Viognier and Grenache Blanc.  All the varietals are bottled individually. The Mourvèdre is our favorite, but we haven’t been able to buy it for years because it’s always sold out when we visit.

As you’re tasting, you can usually sample some olive oil and freshly baked bread.  For sure, Lou bakes bread too, though we’re not sure that every loaf available for sale at the tasting room has passed through his hands.  As you leave the tasting room, turn right and there’s a little country store featuring whatever was recently harvested on the farm.  We’ve never bought any vegetables because we don’t have a kitchen in California, but they do look good.

We miss some of the old wines, especially the aforementioned Faux and a dessert wine that they called Moscato Curioso, with the emphasis on the cat.  Still, we keep coming back to Preston and always will, whenever we come wine tasting in Dry Creek.

Sonoma County has unique attractions for wine lovers: an enormous variety of, well, varietals; beautiful scenery; great restaurants; and of course some very fine wines.  But earlier in our years of wine tasting, Sonoma County was often viewed as simply an adjunct to its more “refined” neighbor across the Mayacamas range. 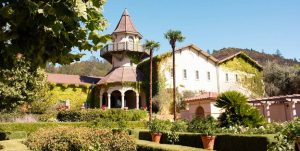 Whenever we wanted to visit Sonoma County, we would take a day out of a trip to Napa Valley and traveled across the Oakville Grade to the southern end, known today as Sonoma Valley.  Our experience there was limited to the wineries right along Route 12 (Sonoma Highway) so that later on we could get back easily to the Napa side.  That wasn’t very restrictive because there were some pretty good places to taste wine.  A typical visit would start at B. R. Cohn, move on to Arrowood, then Kenwood and finish at Château St. Jean.  (Come to think of it, that’s not a bad selection even today.)

But Russian River? Alexander Valley? Dry Creek?  We seem to remember that we had heard of them, maybe, but we had no idea where they were or what they produced.  Then, some time in the 1990’s, we thought we’d spend an entire trip in Sonoma County.  Friends looked at us quizzically.  “Why go there? Why not just stick with the good stuff in Napa?” they would say.  Ever adventurous, we took off across the Golden Gate and along Route 101 only getting a little lost around the town of Sonoma. 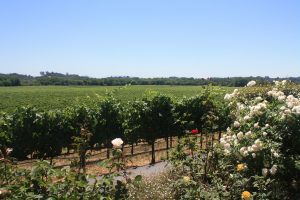 The view across Dry Creek Valley.

Yes, we discovered all sorts of wonderful wines and wineries.  There weren’t as many then but there were lots of well-established wineries, without any of the fancy-schmancy buildings and tasting rooms that were then being erected in Napa Valley.  What some might have called rustic we interpreted as authentic.  Instead of fighting the traffic on Napa’s Route 29, we were traveling along beautiful country roads, lined with vines.

However, there were some drawbacks.  It was hard to find a meal.  There were no restaurants at all along those country roads, and even on Route 101 all we could find were fast food joints.  Hotels weren’t a problem; we stayed at the Hilton in Santa Rosa, now sadly lost to the 2017 fires.  But as recently as the year 2000, we pulled into Healdsburg at midday and had trouble finding a restaurant where we could sit and enjoy lunch and a glass of wine.

Today, the best of Sonoma County is still there while the shortcomings have been eliminated.  The scenery is till ravishing.  There are quite a few wineries that make world-class wines.  Chards, Cabs, Zins and Pinots to be sure, but also wineries that specialize in grapes native to the Rhône and to Italy, as well as California’s own Petite Sirah.  And there is no longer any difficulty finding a good meal, we can assure you.  In recent trips, we’ve dined excellently in Sonoma, Santa Rosa, Windsor and of course in Healdsburg, the culinary mecca of Sonoma County.

We miss a bit of the anything-goes nature of the Sonoma County of yesteryear.  The rough edges have been knocked off, and there are some full-fledged palaces for tasting.  But Sonoma County’s charm and quality have persisted and even improved, so there’s really no comp

The Jimtown Store had permanently closed at the end of 2019, so this is not late breaking news.  But its passing, as well as the 28 years in which it served travelers in the Alexander Valley, tells a tale about what Sonoma County was and what it is now. 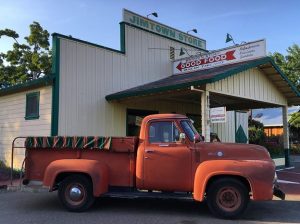 The best that can be said about the Jimtown Store is that it served really good food in a beautiful general store setting, along a country road with views of the mountains.  We always looked forward to lunch there when we went wine tasting in the area.  They had a few tables in the store aisles among shelves packed with goodies, gifts and old fashioned toys.  They also had an outside charming seating area.  It was a relic of another age, with its somewhat dilapidated exterior and the old red Ford pickup parked outside.  The sign outside touted “Good Food” and the store delivered on its promise.

But it was a fake.

Yes, there had been a general store there back in the late 1800’s but it had been closed for years when John Werner and Carrie Brown bought it in 1989.  They refurbished the place, but not too much, to retain the feel of what it had been.  They were not starry-eyed beginners but experienced entrepreneurs in the gourmet food trade.  They opened the store not to serve the local population but rather wine-loving tourists who needed to put some food in their bellies as they hopped from winery to winery.

That told the story of what Sonoma County was becoming in the 1990s and into this century.  Wine grapes were long grown there. The area was focused on farming and winemaking, but there were few tasting rooms, much like Napa Valley 25 years before.  Werner and Brown could see what was coming and filled their store with fancy foodstuffs and gourmet sandwiches.  Now we like fancy foodstuffs and we always enjoyed the gourmet sandwiches but we knew quite well that this wasn’t what the farmhands were eating.

Jimtown Store wasn’t an ol’ time general store any more than Jordan Winery is an English manor or Ledson Winery is a haunted castle.  But all of them were built on the proposition that pretense plus wine equals tourist dollars.

As indicative of Sonoma County as was the Jimtown Store, so was the cause of the store’s closure: wildfire and its effect on tourism.  The recent Kincaid fire came awfully close and it frightened away many wine tasters during the high tourism season.  That, combined with Covid-19, is also a part of what Sonoma County and many other areas of Wine Country have become: a tourist destination starved of visitors.

Again, we want to emphasize that we are among the tourists who in the past have added to Sonoma county’s economy.  We won’t be going this year because of the pandemic and many wineries have only limited openings anyway for the same reason.

The Jimtown Store wasn’t just good food; it was fun.  And Sonoma County isn’t just good wine, either.  The pleasures of going wine tasting are being forced to change, but we who love to do it must always preserve the fun.

A fair question is why there’s any need for wine tasting tips, specifically for Sonoma County.  How is it different than Napa Valley, for instance, or Bordeaux or the North Fork of Long Island for that matter?  The answer is the combination of size and variety.

You can go wine tasting in Napa Valley along two parallel roads and the crossings between them.  Yes, there are wineries up in the hills on either side, but the wineries are all generally concentrated along Route 29 and the Silverado Trail.  As far as the geography is concerned, the same can be said of the North Fork or the Cote d’Or in Burgundy. 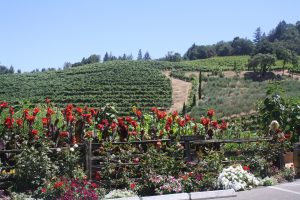 As to variety, while there are ample exceptions to the rule, the majority of wines made in Napa Valley are made from Chardonnay and Bordeaux grapes.  In Oregon, you’ll get Chardonnay and Pinot Noir, as you will in Burgundy.  It will be Gamay in Beaujolais.  But in Sonoma County, Alexander Valley is dominated by Cabernet Sauvignon, Russian River by Pinot Noir and Dry Creek by Zinfandel.  There are pockets of Rhône grapes and Petite Sirah.  And yes there’s Chardonnay everywhere, but you’ll find a healthy amount of Sauvignon Blanc too, especially in Dry Creek.

So if you are new to wine tasting in Sonoma County, here are a few things to think about. 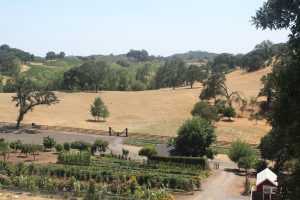