Pézenas is a quiet commune of 8,000 souls, nestled in the uplands of the Languedoc.  As with most villages in that region, wines are made all around it, mostly blends of Grenache, Syrah and Mourvèdre.  Because of the schist soil, the wines there tend to be a bit stony.  If you are in the region for wine tasting, you should also stop to visit the village.

The local tourist people make a big deal about Molière, who lived there for awhile in the 1650s.  His great acclaim came in Paris later on, but the people of Pézenas claim him as a “local boy made good” to this day.  You’ll find a statue of the great playwright across from the Brasserie Molière and the Grand Hotel Molière.  There’s a pretty row of cafés there, but they’re rather touristy. 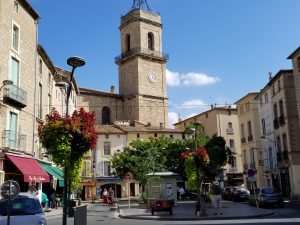 Along the Cours Jean Jaurès in Pézenas, with the Collégiale Saint-Jean in the background.

You should definitely explore the eateries in Pézenas.  On the advice of a local gentleman out walking his dog, we had a superb three-course meal, with wine, for under fifty euros for two people.  Just taking a coffee along the delightfully decorated main drag, the Cours Jean Jaurès, and you know you’re in France.

On that same street, the Piscenois (for so the local inhabitants call themselves) host a grand outdoor market every Saturday.  It takes up the entire center of town and is well-attended by the townspeople and tourists alike.

All the above are great reasons to visit Pézenas.  Best of all, nestled within the charming village is a medieval one.  It has been preserved, cleaned up and adorned with the sorts of shops and galleries that tourists seem to adore.  Yes, we could have done with a few less chocolateries, but it is fair to say that people in the Middle Ages must have walked these narrow streets to buy their bread and olives, so why should we scoff at the commerce that makes this little corner of history possible.

The town square in medieval Pézenas.

You enter through a stone portal on the aforementioned Cours Jean Jaurès and you find yourself carried back eight centuries.  You have choice of streets to follow.  To the right you’ll eventually find yourself in the ancient town square.  There you can stop for a meal or a drink and pretend to be a few centuries older than you are.  From there, too, you can choose from among several streets, alleys really, in which to wander.

The ancient ghetto of Pézenas.

Everywhere you turn, you’re likely to find something to delight your eyes.  Here there’s a fountain, there a statue, up the street a merchant’s house that you’re welcome to inspect.  We found most moving the ancient Jewish ghetto.  Yes, even then, even here, discrimination flourished.  Of course, today this section holds housing for all who can afford it.

That is the overall attraction of Pézenas.  Side by side you find the contemporary, memories of greatness and a wonderfully preserved bit of long-ago times.  And all surrounded by the vineyards of Languedoc!

As you drive along Dry Creek Road towards the northern end of the valley of the same name, you suddenly come upon what appears to be a Tuscan villa.  It is, in fact, the Ferrari-Carano winery, which they call Villa Fiore.  Regular Power Tasting readers know that we are not big fans of Napa palaces, even when they are in Sonoma County.  But we make an exception for Ferrari-Carano.  Why?  Because it really is lovely and they don’t rub your nose in how wonderful they are.  They don’t pretend to be a Persian temple or a medieval castle.  They just serve wine in a very pretty setting. 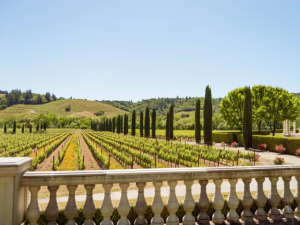 We recommend that you try the wines in the Enoteca.  For one thing, they are their better ones but are also more expensive.  That’s relative, though.  In these days when it is common for a winery’s top bottles to go for three digits, it’s refreshing to go wine-tasting somewhere where the most expensive current release wines go for under $70.  We don’t review wines, just the tasting experience, but it is fair to say that we usually find some wines we like and often buy a few bottles to take home with us. 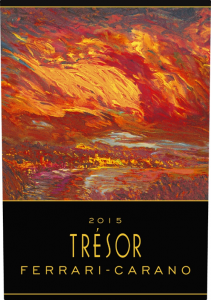 That tasting room is well appointed and we have found the servers to be more knowledgeable.  (Or perhaps they just more enjoy talking about the reserve wines.)  On one wall is a painting that is reproduced on the label of Ferrari-Carano’s Bordeaux blend, Trésor, and is worth more than a glance.

There are many wineries, even ones we like, where we taste their wines quickly and then move along our way.  Ferrari-Carano was built for lingering.    The fact that the tasting fees and bottle prices are reasonable may inspire you to travel up Dry Creek Road.  The villa, the gardens, the fountains and the art are quite admirable and combine to invite you stay and sip.  We recommend that you accept the invitation.

This article is the first of what will be an irregular series on how the atmosphere at a winery and its tasting room influences the wine tasting experience, your appreciation of the wines, and the impressions you keep when you look back on your visit and the wines you tried.  We may overstate the case occasionally to make a point, but our thoughts on the subject are drawn from years of experience.

There are sectors of Wine Country where the reason to go seems more to party down than to gain an understanding of the products made there.  Some of these are in up-and-coming areas that attract a lot of young people.  In that regard, Santa Barbara’s Funk Zone and many Long Island wineries, both especially on the weekends, come to mind.  But we have come across this same atmosphere in older, more established regions, such as Napa Valley, as well.

What are the hallmarks of a party winery?  The most prominent seems to be rock or rap music, played very loud.  On Long Island’s North Fork, there are quite a few wineries that feature live bands on the weekend.  And they’re not top tier either; more likely they’re the local bar band.

Another clue is pizza by the pool.  There are some wineries that have pizza ovens on premises and others that let a pizza truck pull up outside.  We have nothing against either pizza or swimming pools.  In fact, we like both very much. But not with a glass of Cabernet Sauvignon, which may cost more than $100 a bottle, in our hands and with the noise around us.

And that’s the point: No company that’s serious about its product should cheapen its brand.  The wines appropriate for a party atmosphere are light, fruity and refreshing.  They are in the league of what you might expect to drink in a bar where the choice is only red or white.  We all drink them from time to time, but we wouldn’t make a special trip to try them.  For those who do, the objective is the party, not the wine.

It saddens us when we come across wineries that make high-quality wines (at top prices) that act more like hosts than winemakers.  As we understand it, they think it helps them to differentiate themselves in a crowded tourist market.  But as a representative of Long Island’s Pellegrini Vineyards told us, “No one stands out if they all do it.  We’d prefer to differentiate ourselves on our wine.”

If you are interested in discovering great wine and instead you discover that a party has broken out, there are several things you can do.  One would be to get back in the car and go elsewhere, but then you might miss some fine wines.  But are you really missing them if you can’t enjoy them as they deserve?  We submit that great wine just doesn’t taste the same when there is extraneous distraction all around.

Perhaps there are some quiet corners of a tasting room where you can sip your wine in peace.  That does work, but it is likely that service will be slower, because the personnel are taking care of the party crowd.

Another tactic is to avoid visiting on weekends, which isn’t a bad idea on its own merits.  Many of the wineries only get the party going then, so peace and quiet prevail the rest of the week.  In some cases, even on weekdays the music is loud and the pizza is available, but the partiers aren’t there so it’s not as bad.

We assure you that if you do visit one of these party palaces, it will be the party you remember years from now, not the wine.

In certain European corners of Wine Country, there are laws that determine what sort of wine can be made there.  To use two examples near each other, in the Northern Rhône winemakers in Condrieu must only make white wine.  Down the road a piece in Cornas, they are restricted to red wine and only Syrah at that.  We Americans (and Australians and Sicilians, too) are more used to visiting wineries in our own country, where almost all make both red and white wines.

Now, we at Power Tasting have a preference for red wine.  We have been known to say, only half facetiously, that white wine is something to do with your hands at parties.  But when we enter a tasting room, we are almost invariably offered a glass of Sauvignon Blanc or Chardonnay to begin our introduction to their wines.  Should we go ahead and sip something we’re less likely to enjoy or skip right ahead to the red wines? 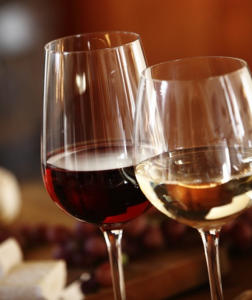 There are good reasons for either decision.  Among those in favor of trying the whites are:

On the other hand…

As can be seen, there’s no universally correct answer.  We tend to go both ways, often with both white and red wine early in the day and only red as the shadows get longer.  And of course if you favor white wines over reds, all the above applies in reverse.