General rules are meant to be broken.  In general, the wines served at in-town tasting rooms are sub-par compared with those at wineries surrounded by lovely rows of vines.  Fortunately, there are exceptions and there are good reasons to take a day to visit a town in Wine Country and find out what’s on offer there.

On a recent trip we decided to try our luck in the town of Napa, for several reasons.  Our trip extended over a weekend and we wanted to avoid the crazy Sunday crowds and traffic on Route 29 and the Silverado Trail.  Also, we had heard good things about the Oxbow Public Market and were looking forward to finding out what the buzz was all about.  Finally, we wanted to eat lunch at the Bounty Hunter, of which we have written previously.  [We never did dine there on this trip.  It was ungodly hot and their air conditioning was on the fritz.]

The main drag for tasting rooms is 1st Street, running from the aforementioned Oxbow Public Market to the Napa civic center.  As we had expected, there were some tasting rooms we did not enjoy very much.  But there were also some that delightfully exceeded our expectations.  The first of these was Capp Heritage.  Even if you don’t like their wines – heck, even if you don’t like wine at all – their tasting room is worth seeing.  It has two rooms, one of which is a lounge in which they have musical performances on the weekends.  There are big easy chairs and a copper fireplace, which blessedly was unlit the day we were there. The other room contains brass chandeliers and a long mahogany bar that looks as though Diamond Jim Brady might walk up to it at any moment.    That, of course, is where they pour the wine.  (There’s a great wraparound picture of the bar on their web site, http://www.cappheritage.com).  The Capps were primarily farmers who sold to winemakers until, like many growers in the region, they decided to bottle their own wines.  We aren’t wine critics but we can say we enjoyed what we tasted, particularly an unusual Sangiovese and their Meritage.

Just down the street is John Anthony.  That’s the label, the name of the tasting room and the first two names of the proprietor.  We were surprised to learn that his last name is Truchard, son of Tony and JoAnn of Truchard Vineyards, which we have written about in a previous article.  The tasting room is nouveau chic, looking more like a night spot than a place for serious wine tasting.  In fact, that’s the way they advertise, appealing to those out on the town in Napa for an evening.  On a lazy Sunday afternoon, we were the only visitors and the server was able to give us his full attention and quite an introduction to the wines, which were very serious indeed.  There’s a top-end Cabernet, not usually available for tasting, that really impressed us. They have a special deal they call the List: sign up for as few as six bottles a year and they lock in the price forever.  We don’t understand he business model but it sounds like quite a deal.

Unfortunately, there were others that we didn’t enjoy nearly as much.  You may have heard of Cosentino Winery in Yountville.  Mitch Cosentino sold it a few years ago and opened pureCru, which can best be called a boutique winery with a hip looking tasting room just off 1st Street.  Our server will be a twentysomething in a few years.  She knew very little about what she was pouring and so we just had to drink our wine and make our own determinations.  Fair enough, but we weren’t that enthralled with what we were drinking.

The worst of the lot was a dreary room two blocks off 1st Street at Clinton Street.  There they serve Havens and Stonehedge wines.  The server seemed bored, unwilling or unable to answer questions and gave off an attitude that we were spoiling her Sunday afternoon solitude. We didn’t care for the wine much but that wasn’t the point.  If they had been presented to us in a friendly, welcoming manner it would have made for a better tasting experience and we might have liked the wines more.

There are other tasting rooms and bars with extensive by-the-glass lists in Napa Town.  The Oxbow Public Market is made for urban foodies out in the country for the day, which just about describes us.  It’s a fun place and you might want to have lunch or a snack at one of the many eateries there.  All in all, we spent a very pleasant day of our trip in the town of Napa.  We’ll be back.

We were on vacation in northern Italy and one of our stops was Verona.  It’s known for Romeo and Juliet and yes, you can visit that famous balcony and have dinner in Romeo’s house.  Verona is a lovely little town that gives visitors a chance to see the Roman, medieval and Renaissance worlds.  And it’s about a 20-minute drive from Valpolicella.

A generation or two ago, a lot of wine from Valpolicella was thin, acid and cheap.  It was red, hard to pronounce and it paired well with spaghetti and meatballs.  Steve’s father, who knew nothing about wine, favored Valpolicella because it’s what Hemingway’s characters drank in the The Sun Also Rises. Little did Dad know that the same region made Amarone, one of Italy’s vinicultural wonders.

Happily, it is easy to tour around the Valpolicella wine growing regions and the wineries welcome visitors.  A visit can have its peculiarities, though.  We pulled into the courtyard of one winery only to meet the winemaker, who spoke no English.   He figured we wanted to taste his wines so he invited us into his house where his daughter, who was studying English in school, poured us some wines at the kitchen table.

At another winery, once again the winemaker spoke no English and he had no daughter to help him.  All he could say, at the top of his lungs, was AM-A-RON-E.  We drank up, giggled a bit, and went on our way.

If you get off the highway in the village of San Pietro in Cariano, one of the first wineries you’ll see is Brunelli.  While not a Napa palace, it will look familiar to American visitors: a little bar, a lot of bottles and someone behind the bar pouring wine.  In this fortunate case, the pourer was Alberto Brunelli, winemaker and son of the founder.  He took the time to explain what Valpolicella wines are all about, with some excellent tastes to enhance the lecture.  Here’s what he said, in capsule form:

The primary grapes are Corvina, Corvinone and Rondinella, unique to the area.  The wine pressed at harvest (usually in August) is Valpolicella Classico or Classico Superiore.  It’s not at all bad these days, but it’s basically what Steve’s Dad was drinking.  The best of the grapes are set on drying racks and left for four months.  Of course, they shrivel and the remaining liquid is extremely concentrated.  These get pressed and become Amarone which must, by law, be aged in casks for a minimum of three years.  The skins are retained and some of the Classico is poured over them to make a Ripasso (re-passed).  The second vinification results in a more alcoholic, deep and rounded wine. 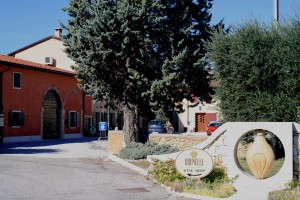 At a top-end, rather Napafied winery called Zyme, we tasted a significant number of traditional and not-at-all traditional Valpolicella wines.  Our guide that day, seeing that we were truly interested in learning about Valpolicella wines, suggested we call her cousin’s winery to make an appointment for a visit.  The next day we asked our hotel to make the call and we drove off. The winery was called Quintarelli Giuseppe; we drove for hours trying to find it.  Finally, just before noon, we located it and pulled into their yard.  A pleasant young man greeted us and asked what we wanted, as they were closing for lunch.  We apologized and said that our hotel had called for an appointment but evidently they never had.  Crestfallen, we were about to leave when the nice young man said, “Oh, well, you’re here.  I’ll show you around.”  And so we got a personal tour and tasting from Francesco Grigoli, winemaker and grandson of the founder.  We were treated like family, meeting his mother along the way to the tasting room, where we discovered that we had happened on the premier Valpolicella winery, whose Amarones sell for $350 or more in the US.  And what wines!  Their Classico is really a Ripasso and their Amarone is, in Steve’s words “a religious experience”. 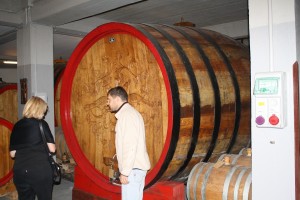 On the way out, we asked Francesco if he could recommend somewhere for lunch.  He said most places were closed that day, but he did know one was open because his mother was dining there that day.  He made a call and all we could recognize in the flow of Italian was “due Americani”.  He then showed us a little white dot on the horizon and told us to drive there.  “How will we find the restaurant?” we asked.  “Don’t worry”, he said, “The only things in that village are the church and the restaurant”.

We arrived and were led to a table in the wine cellar.  Shortly afterwards, Francesco’s mother arrived with some industry people and greeted us like family.  The meal was one of the best we had eaten in Italy and the overall Valpolicella experience was a wine taster’s dream.