If you want to visit a winery with some serious clout, go to Plumpjack (www.plumpjackwinery.com) in Oakville in Napa Valley.  It is owned by Gavin Newsome (currently Lt. Governor of California and if the polls are to be believed, soon to be the Governor) and Gordon Getty (yes, that Getty family).  All of which has no meaning whatsoever with regard to the wine tasting experience when you go there.  Plumpjack is laid back, casual and definitely focused on the wine.

A word about the name.  Plumpjack refers to Sir John Falstaff, a character in several of Shakespeare’s historical plays.  He was a hearty, hard-drinking rogue and evidently that was the image that the owners wanted to give their winery.

The building housing the tasting room is no Napa palace, though clearly the owners could have afforded to build an architectural masterpiece if they had wanted to.  The fact that it is a quiet farmhouse (or so it seems) nestled within their vineyards says a lot about their approach to their wines: solid, approachable, focused on what’s in the glass and not on all the extraneous fol-de-rol that typifies some wine tasting experiences in Napa Valley.

And what’s in the glass is of very high quality.  They do make Merlots and Syrahs, but Plumpjack’s specialty (and the reason to taste there) is Cabernet Sauvignon.  The rating numbers given by the trade magazines don’t mean everything, but consistent high 90’s and a scattering of 100’s does mean something.  It tells the visitor that almost every harvest produces wines that are well worth tasting. 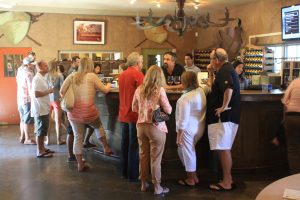 The atmosphere of a tasting at Plumpjack is very important.  Even when the tasting room gets crowded (primarily on weekends) you don’t feel rushed or pressured.  The basic tasting charge of $40, while not out of line with other top-tier wineries, does keep down the size of the crowd.  You can stand up by the bar or take your glass outside to the porch or under the vines that grow alongside the building.  The views out over the vineyards add enormously to the pleasure of your tasting.

In addition to the tasting room, Plumpjack offers seated tastings.  One to consider, especially on weekends when you might want to avoid jammed tasting rooms, is Plumpjack’s hilltop tasting.  There’s a small hill on the property and they have a table at the top where the combination of wine and view are matchless. 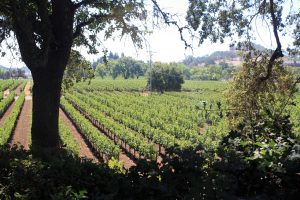 The view from Plumpjack’s hill

Plumpjack is a “by appointment only” winery.  It’s always a good idea to have an appointment and on weekends it’s fairly necessary, but our experience has been that if you arrive and they’re not full, they’ll make room for you.

Worth noting is that Plumpjack also owns two other wineries, Odette in Stags Leap and Cade on Howell Mountain.  Your tasting at Plumpjack is likely to include some wines from these properties as well.

If your idea of a wine tasting experience is to party in fancy digs, Plumpjack isn’t for you.  But if you like serious wine in relaxed circumstances, make your way to Plumpjack on the Oakville Cross just off the Silverado Trail.  You’ll be happy there.

If you enjoy wine tasting and you’ve never taken a tour of a winery, you really ought to do it.  Wine making is one part farming, one part artistry and one part industry.  When we open bottles at home, we can see the artistry, how winemakers have induced humble grapes to tempt the eye, nose and tongue.  There’s a little bit of the industrial side as well, if you count the marketing that goes into the labels.

When you are actually there at a winery all three parts are right in front of you: the vineyards, the gleaming bottles and glasses at the bar and that factory right behind the tasting room.  Skipping that last part is to willfully ignore some of the mystery that ends when you swallow but begins in the field.  You really ought to gain an understanding of how the wine got from that vineyard to your mouth.

What follows is a word picture of a winery tour.  Keep in mind that this is a generalization, as each winery does more than a few things its own way. 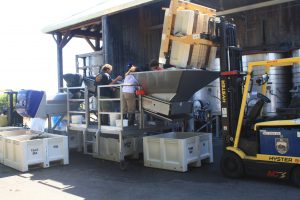 Destemming at Saintsbury in Carneros

The grapes arrive at the winery in huge bins, packed to overflowing.  The stems and everything that isn’t grapes are removed and then the grapes are pressed.  (No, they don’t use feet anymore.)  The juice is transferred to vats and yeast is added to turn the sugar into alcohol.  Once that occurs and all the scummy stuff is removed, the juice is transferred to even larger vats where they are blended to get the mix that will eventually be wine.  From there the soon-to-be-wine is stored in barrels for months.  Finally it is pumped into bottles and the bottles are put in boxes to be sent to wine stores near you. 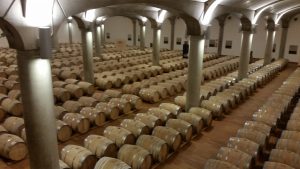 The barrel room at Donnafugata in Sicily

So now that we’ve told you how it’s done, why bother going?

Only one of us has been wine tasting in South Africa and Steve was only there briefly, so we can’t offer much in the way of recommendations or meaningful reviews.  So this will be about the experience, rather than the wines, which is what Power Tasting is all about.

Steve was in Cape Town on business and gave himself the weekend to overcome the jet lag.  He found himself alone, 8,000 miles from home and that Sunday was his birthday.  So to shake the blues he went wine tasting.

Fortunately, the best known winemaking areas in South Africa are quite near to Cape Town.  Stellenbosch, Paarl and Franschhoek are less than an hour’s drive from downtown.  Unfortunately, Steve had no car, no idea of where to go and besides they drive on the wrong side of the road there.  Then and now, the American dollar goes pretty far in South Africa, so Steve found a taxi and hired it for the day. 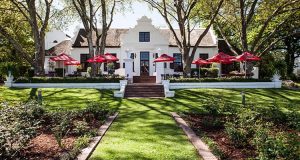 Nederburg Winery, with dining tables outside.  Photo courtesy of Spice4Life.

The taxi driver was no wine enthusiast and had no particular idea where he was going, either.  Steve had read up on South African wines and had a few wineries in mind for a visit.  He was lucky that they were fairly close to one another: Meerlust, Nederburg and Spier were on his list.  Amazingly quickly, Steve was seeing grape vines out the taxi window and in a half an hour he had arrived at Spier.

One thing he quickly learned was that they don’t call them vineyards but rather “wine farms” which, when you think about it, makes a lot of sense.  The second thing he learned is that South Africa has a significant wine history.  In the 19th century, it was a world-class producer; the Constantia wine estate grew one of the world’s most coveted dessert wines.  (You can still get a sense of it with Klein Constantia Vin de Constance, but according to the historians it’s not the same thing.)  Next, Steve learned that many of the better wine farms have top-notch restaurants.  Steve’s lunch was local lamb chops and a bottle Nederburg’s best Cabernet Sauvignon. 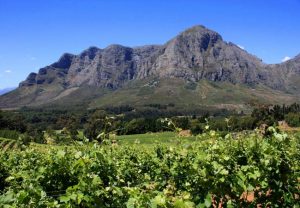 One of Steve’s best memories of his visit was the beauty of the vineyards at the foot of the Drakenstein (“Dragon’s Stone”) Mountains.  Of course there are many vineyard areas in Wine Country with vines and mountains, Napa Valley not the least.  But the views in Paarl and Franschhoek are particularly striking.

Most of the wines in South Africa are from familiar grapes but there is a sort of wine that is unique.  Called Pinotage, it is from grapes cross-bred between Pinot Noir and Cinsault, beginning in the 1920’s.  It doesn’t taste quite like anything else and frankly, we’re not big fans of Pinotage.  But it does add a certain local flavor to a visit to South Africa, where there are a few rather excellent wines, from better known grapes, to taste.

Here’s a place to visit that you can’t visit anymore, and thank goodness for it.  But there is  some kind of nostalgia involved anyway.

In many US states and Canadian provinces, sales of alcoholic beverages are restricted to the government.  That’s all right because these stores are indistinguishable from the private wine and liquor stores in other states.  You walk down aisles with shelves stocked with wines, locally made and from around the world.  Just because it’s an SAQ store (Société des Alcools du Québec) or one run by the Pennsylvania Liquor Control Board makes no difference.  Do you really care if the profits go to the government instead of a private owner?

But it wasn’t always this.  Just because Prohibition ended in the United States in 1933 and in 1920 in Canada (a wartime provision) didn’t mean that drinking alcoholic beverages was universally accepted.  In fact, in many places it was considered to be a sin.  Therefore, various jurisdictions reached the rather contradictory conclusion that if the state or province was opposed to sin it should nonetheless profit from the sinners.  But they needed to be well aware that they were sinning.  Hence, the state stores were born. 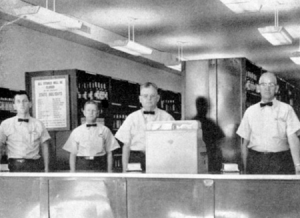 There were no aisles to wander.  There were no gaily decorated bottles to see.  There was no one to ask for a recommendation of what to serve with dinner that night.  What there was was a counter, some civil servants and racks of bottles behind the counter, “unauthorized entry prohibited”.  There was a price list of the products for sale in a plastic folder on the counter and you asked one of the civil servants to get you a bottle of whatever you intended to buy.  These individuals were there to serve you, but it definitely wasn’t service with a smile.

It became a rite of passage for a teenage boy to enter a state store with a driver’s license clenched in his fist and ask for…what?  Something.  Anything.  Just to prove that he could do it.  Drinking from that bottle was almost an afterthought and it was surely not going to be a fine wine from the vineyards of Bordeaux (he probably couldn’t pronounce it, much less spell it).  More likely he said, in a tremulous voice, “I’ll have a bottle of Gallo Hearty Burgundy, please”. Thus were the wages of sin paid.

Note that we refer to teenage boys.  Legally speaking, girls were allowed but that just wasn’t done in those times.  In fact, it was a brave grown woman who entered a state store.  Moms looked askance if Dads even took their little children into a state store with them.  Lucie’s Dad took her and she still remembers her Mom’s comments when they got home.

The whole point was that you were supposed to feel guilty.  Guilt was the cement that bound the drinker with society, and it was guilt that washed the sin away from the state or provincial coffers.  The underlying schizophrenia of such a system had to become unsupportable over time.  Eventually, the governments came to realize that they could make more money from sin if they made it seem attractive rather than reprehensible.  And so the stores became as they were and still are in their less restrictive neighboring states.

For those of us who enjoy tasting and drinking wine responsibly, it is hard to think back on these benighted times.  But it’s good to do so from time to time, if only to put our pleasant avocation in context of our times…and those gone by.