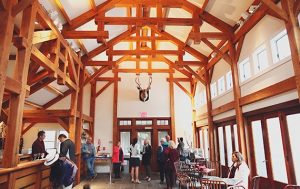 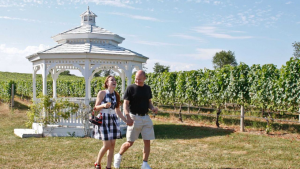 We almost didn’t visit Narbonne.  We were in southwest France to soak up village life and to visit vineyards.  Why spend time visiting a second-tier city that wasn’t on the list of “must-see” places in the country.  But it was only a short drive from where we were staying and so why not?  It would have been a big mistake to miss Narbonne.

Located in the heart of Languedoc Roussillon, there are indeed many vineyards in the general area as well as some famous beaches (Narbonne Plage) nearby.  The city manages to contain ancient monuments, 19th century splendor and modernity quite well together.

The best of the ancient buildings are a gothic cathedral and an almost as old bishops’ palace, so we went to take in a bit of medieval culture.  And indeed, the cathedral is impressive.  There had been others on the same location and in 1268 the Pope decided that the town was safe enough from heretics to build a new one.  Most of it was erected, but they never quite got around to finishing it.  What they did build is quite an eyeful, especially the gargoyles around the top.

By all means see the old stones, but leave time for the more contemporary, less touristy attractions Narbonne has to offer.  For us, foodies that we are, the topmost among these is the grand indoor market, Les Halles de Narbonne.  Like other markets in France, you’ll find a cornucopia of fruits and vegetables bursting with color and flavor. (If you’re there at the end of summer, eat mirabelles, small green plums that are the sweetest we’ve ever tasted and you can’t find them in the United States.)  There are beautiful meats, of course with butchers who will slice you a steak of Aubrac beef.  And the cheese counters are a tour of French pastures.

But not everywhere can you find the kiosk that specializes in tapenades, the olive and anchovy spreads beloved in the south of France.  Or the fellow who will sell you cassoulet in an earthenware bowl for you to heat it up in.  Or counters of tapas bars (Narbonne is quite close to Spain) where the locals meet on weekend mornings for snacks and wine.

Should you be there on the second Saturday of September, the local winemaking fraternities hold their annual Fête des Vendanges (harvest festival).  You can see the members of these wine societies parade through the village and into the Marché, striding with a few instrumentalists among the food stalls.  A grand feast is held outside on long picnic tables, with food available from many of the stalls inside.  You feel as though you were just transported to the Middle Ages.

Along the Canal de la Robine in Narbonne

If you’d like to sit in a bistro along a tree-shaded canal, Narbonne offers many of them as well, along the Canal de la Robine that crosses the city.  In warm weather, which is most of the year, there are outdoor tables in front of every restaurant.  Your only problem is choosing which one.

Finally, leave some time just to walk around.  There are narrow medieval streets, leafy boulevards and lots of charming places to stop for a coffee.  Avail yourself of this little French jewel of a city, and then drive just outside of town and visit the vineyards.

They say that the month of May is merry.  We can’t vouch for that, but we do know that it is an excellent time to visit Napa/Noma.  (Not to say that the other months aren’t excellent in their own ways.)  This is the time of year that the vines are flowering and getting ready to set the fruit that will be crushed in September.  It is also a time when many vineyards release their new wines for sale, so there’s a lot to taste. 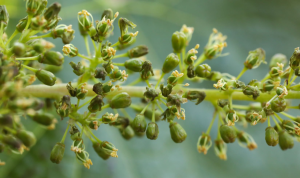 A grape vine in bloom.  Photo courtesy of Jordan Winery.

Another very important benefit of visiting Napa Valley and Sonoma County in May is that the Big Heat has not yet arrived (although global climate change is pushing the heat sooner in the year) while the crisp coolness is out of the air.  That’s not to say you won’t encounter chilly, humid, misty mornings; these happen all year long in this sector of Wine Country.  Almost dependably, however, by around 10:30 the mist lifts and you are greeted by glorious sunshine.

Weekends, particularly Mothers and Memorial Day weekends, can be very crowded in the Napa/Noma tasting rooms and the roads leading to them.  If possible, avoid Route 29 in Napa Valley.  Sonoma County, being more spread out, doesn’t have quite the traffic problem that is found in Napa but Route 101 is likely to be more backed up.  On the weekends, it’s a very good idea to make reservations for tastings in the top wineries you might be interested in.  Another idea is to use these days for in-town tastings in Napa, Yountville or Healdsburg. 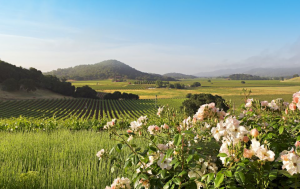 The farm-to-fork restaurants that abound in Napa/Noma find themselves with fresh local ingredients again in May.  It’s not the same as the bonanza of fruits and vegetables that will come during the summer, but it is time to say goodbye to root vegetables and preserved fruits in favor of products right off the vine.  (No, not grape vines.  That comes later.)

If you can find the time to go wine tasting during the week in May, you will have the advantage that in most places school is still in session.  We love little children but they really don’t belong in tasting rooms.  That’s not to say that you will find the wineries empty in May.  Far from it.  But you will be able to sip somewhat more peacefully in May than in the following month.

Figuring out what to wear in Napa/Noma in May is a bit of a puzzle.  In a local climate that has cold mornings, warm afternoons (up into the 80s) and cool evenings (down to the 50s) you may want to have a wider variety of clothes than in other times of the year.  Wearing layers makes sense, because you can put on a sweater or a jacket at one time of day and take it off as things warm up.

In song and verse, springtime is seen by many as the best season.  Why not enjoy it wine tasting in America’s foremost winemaking region?

There really is no justification for being a wine snob, not even (maybe especially even) if you know a little bit about wine.  If you are a wine expert, it’s still not excusable to be a snob because the whole idea of snobbery is to make others around you feel small.  What you do in the privacy of your own home is your business;  snobbism should be avoided when visiting tasting rooms in Wine Country.

Let’s say you have entered a tasting room.  Who’s there?  Anyone accompanying you, a few servers and some other wine tasters.  Your significant other is unlikely to be impressed with your vast knowledge.  The servers already know a lot about their own wines.  And the other guests are strangers who you’ll probably not see ever again.  So who is there to be snobbish for?

Courtesy of the Mercury News.

Here are some simple tips for avoiding wine snobbery when you’re out tasting.

Once again, we have all been reading about the terrible fires in California, especially about the Kincade fire that has afflicted Sonoma County.  Sad to report, two wineries have been destroyed: Soda Rock and Firestone.  As we read the papers about these two, our initial reaction was that we didn’t know Soda Rock but that we were deeply saddened by the destruction of Fieldstone.  Their Cabernet Sauvignons have been among our favorites in Alexander Valley and the views of the mountains from their winery were priceless.  Soda Rock received only a shrug.

But that shrug was very wrong.  Maybe Soda Rock wasn’t well known.  Maybe their wines weren’t to our taste.  (Who knows?  We’ve never tried them.)  But the owners, Ken and Diane Wilson,  had certainly invested time, money and love into their winery.  Somebody liked their wines, because they did sell them.  People’s livelihoods depended on Soda Rock.  We’ve learned that the buildings on the winery were historic, albeit in need of repair, upkeep that will never be made now.

Which of us is so wise, has such an elevated palate that we can dismiss their wines?  Soda Rock was part of the community that collectively makes up Wine Country.  Its loss diminishes us all.  If they were making wine, that was good, because each winery in its own way is good.  They’re all good.

We were pleased to read that Soda Rock is still offering tastings in their barn.  That’s a very good thing, indeed.