There are times when we’ve been on a wine tasting trip that we’re eager to do something else than tasting wine.  (Gasp!)  Often it’s because we know we’ve had enough alcohol for one day, but sometimes it’s just a desire to take advantage of other things that are of interest in the area we’re visiting.  As with most Americans interested in wine tasting, we’ve been to California’s Napa Valley more often than any other destination, which has led us from time to time to Bale’s Mill. 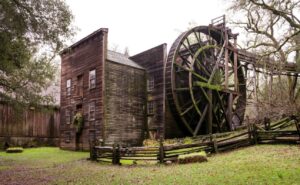 Bale’s Mill, as it is today.  Photo courtesy of the Library of Congress.

The precise name is Bale Grist Mill State Historic Park, but we’ve never run into anyone who calls it by its full name.  The road signs don’t, either.  It’s located on Route 29 where St. Helena and Calistoga meet.  There’s parking just off the highway and then you follow a trail through the woods until you reach the mill.  The trail is paved, so if you didn’t wear your hiking shoes, you’ll be all right.  And there are more than two miles of trails through the woods if you did come appropriately attired.

The mill has been there in one form or another since 1846, when that part of the world was called Mexico.  It was in actual use until the 1900’s and has been retained and restored several times over the years.  The most recent renovation was only completed in 2020.

The mill was erected by a doctor named Edward Bale.  It was used by local farmers who brought their grain there to be ground into flour on the mill stones, which were powered by a large wheel driven by Mill Creek.  No doubt the mill came first and the name of the creek followed.  Bale had married into the Vallejo family that governed the region and when he died in 1849, his widow took over its operation.   Evidently she was a canny businesswoman and did quite well with it.

There are tours (with guides in historic dress) and milling demonstrations on the weekend.  School tours happen during the week, so you might have a troop of little visitors with you when you go.

There is an attraction to Bale’s Mill for those whose primary purpose for being there is tasting wine.  Napa Valley was and is primarily an agricultural area (although tourism is rapidly catching up).  It’s one thing to read about the history of the region and what has been grown there and quite another to see and experience it.  Bale’s Mill is a trip into Napa Valley’s past and in a way of the people who made it what it is today.

Before there were big corporations selling expensive bottles, there were farmers, many of whom were Italian immigrants who tilled the soil.  Yes, they planted vines to remind them of the homes they left behind but they had to eat more than grapes.  They grew wheat and corn and brought their produce to the widow Bale.  There was – and is – an elevator that carried the grain upstairs to be cleaned.  Then it was fed into the grindstones to make flour and cornmeal, which ultimately became bread.

All in all, Bale’s Mill makes a fine diversion from a day of sipping wine, one with a lot of history to be discovered.

You may have tasted a Rafanelli wine and if you did, it was probably in California and it was probably a Zinfandel, the wine they’ve been best known for for decades.  If you tell someone about what you tasted, they’ll either give you a dull look indicating that they’ve never heard of it or you’ll get a knowing nod that says that you’re now an initiate in a special club of Rafanelli admirers. 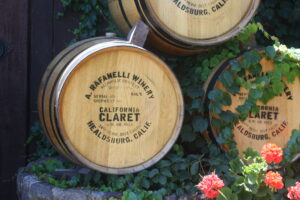 It’s not a winery that’s off the beaten path, since it sits on a hill along the well-travelled West Dry Creek Road.  And while you can go there for a tasting, you will need an appointment, which is not that easily come by.  (You even need an appointment to buy wine.)  When you go, you won’t find yourself in a handsome tasting room with servers waiting on you.  You’ll be in the barrel room with a worker who will be back growing grapes or making wine as soon as you leave.  Rafanelli is a throwback to an earlier era of wine tasting, one that is rapidly fading away as wine tasting has become a popular attraction for tourists.

Sometime in the early 1900’s, Alberto Rafanelli came over from Italy with his wife Letizia and planted vines.  It’s not clear whether those were Zinfandel grapes; in those days immigrant farmers planted whatever they could and mixed vines together in the fields.  By mid-century, their son Americo had moved the winery to its current location and had focused on Zinfandel.  From then to now, a Rafanelli Zin is a powerful, deep, fruit forward wine.  Was Dry Creek Valley famous for Zinfandel before the Rafanelli’s started cultivating it or did they cultivate it because the grape does well in Dry Creek.  Who knows?  And really, who cares except for the family itself.

As a visitor, what you should care about is what they serve you.  Some things you know in advance: It will be red wine.  You’ll certainly get to taste the Zinfandel.  You’ll get a feel for winemaking more than salesmanship.  You will probably be given a little of their other wines, variously going from 100% Cabernet Sauvignon to a 60-40 Cabernet Sauvignon/Merlot blend.  Their top-rated wine, the Terrace Select, does not show up often in tastings (at least to our experience).

You will be in a working winery when you visit, no palaces here.  There is a loveliness about the location, though, sitting on a hill, surrounded by flowers.  We have a particular fondness for springtime, when the hill is alive with daffodils. 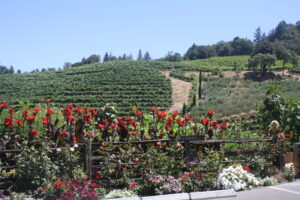 There’s another factor that makes a visit to Rafanelli attractive.  The management, winemaking and vineyard cultivation are in the hands Alberto’s great-grandchildren.  In this highly commercial age, it is rare to discover a family-owned winery, much less one that is carried on to the fourth generation.  Though we don’t know this as a fact, we believe that this tradition gives Rafanelli the freedom to make wines as they like them and not as some marketing department tells them to do.  We’re sure that the family hopes you like what they do, but they’re going to continue to do it their way.

Christopher Columbus wasn’t trying to discover America.  He was looking for China and stopped in Hispaniola, which of course had already been “discovered” by the people living there.  All the same it worked out pretty well (except for the natives).  If you want to make discoveries on a wine tasting trip, you can’t set out to find them; you have to let them happen and recognize them when you do. 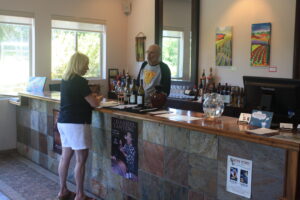 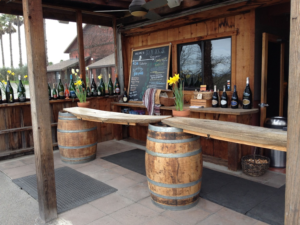 The overall point is that you can’t and won’t make discoveries unless you are open to them.  Throw away your preconceptions.  Be ready to try something you’re unfamiliar with.  Trust your eyes and your taste buds.  You’ll reap rewards.

When we first started going wine tasting as a recreational outing, everyplace we went, everything we tried was a discovery.  We will never forget the wonderment we felt as we drove along Route 29 in Napa Valley.  All those wineries!  Such famous wines and they come out of those buildings!  And they let you try what they make (for free in those days)!

We have recreated that feeling often in our travels and it’s always the same.  Aha, so this is really Bordeaux or Burgundy or Paso Robles or Montalcino!  In a way, it has been the same rush as we once felt on Christmas morning.  But over the years, as we have returned to our favorite corners of Wine Country, that initial thrill has given way to pleasures of familiarity, of knowing what we were going to taste and knowing that it would be good.

There is still plenty of opportunity for discovery as we make our way through Wine Country.  They never happen where you expect them to be; they always come as a surprise. 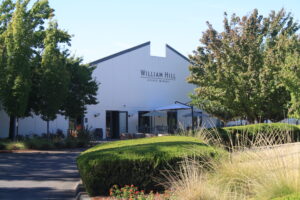 And these sorts of discoveries don’t even include the pleasing response to a winery where the wine may not be to your taste, but the overall experience makes a visit worthwhile.