Power Tasting’s normal practice is to review one winery each issue.  But whole there are many wineries in Saint-Chinian making quite good wine, there are no standouts so we thought it best to review a group of them to give a sense of what wine tasting is like in the region.

Saint-Chinian is an appellation d’origine contrôlée or AOC.  Within it there 20 communes or sub-regions.  There is a difference between the wines from the rockier souls of the north and the clay/limestone of the south, so we are offering capsule descriptions of four, chosen for their proximity to the town of Saint-Chinian.

Château Belot is in the Pierrerue commune and is nestled in the midst of its vines and plentiful garrigue.  (What is garrigue, you ask?  To say it is wild-growing brush is true but doesn’t say enough.  It has an earthy herbal aroma that somehow manages to infuse itself into many of the wines of the Languedoc.)  The building housing the winery and tasting room is an expression of the Spanish-influenced architecture often seen in Saint-Chinian.

As is common in Saint-Chinian, all of Belot’s wines are made with the customary Rhône grapes: Grenache, Syrah and Mourvèdre in the reds and more variety in the whites made from Viognier, Chardonnay, Grenache Blanc and other grapes.  The tasting room is simple and modern.  There aren’t a lot of visitors, so one server manages to attend to all guests.

Even smaller is the Château du Prieuré des Mourges, also in the Pierrerue commune.  The domaine was once the property of the bishops of some nearby towns and there may have even been a priory there.  There is no tasting room as such, but there is a room where you might well find the winemaker, Jérôme Roger, at work and happy to share a glass with you.

He doesn’t make a lot of wines but we found the wines of Prieuré des Mourges to be among the richest in the area.  Enjoy them while you’re in Saint-Chinian because they do not export to the United States. 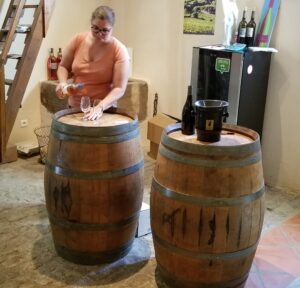 Château La Dournie has been passed from mother to daughter for many generations.  Located in the Saint-Chinian commune, right outside the village, it is rather spartan and industrial although the building is attractively vine-covered.  The tasting room is evocative of Napa Valley in the 1960’s: two barrels and not even a plank between them.

Like the others, La Dornie makes a variety of red, white and rosé wines from traditional Rhône grapes.  Most are meant for consumption with meals, but they also make wines called Shebam!, Wizz! and Oops! that you just can’t takeseriously.

Clos la Bagatelle, is located in the Saint-Chinian commune, but has parcels of land in four different areas.  It dates back to 1623 and has been in the same family – mother to daughter – for all that time.  The tasting room is not much more than a shed and the inside, while clean and well lit, is hardly more than two half barrels.

A visit to Clos la Bagatelle is interesting in that you get a chance to taste the work of a Saint-Chinian winemaker from lands around the Languedoc.  As with all the wineries mentioned here, you will be welcomed and well attended if you do stop by.

Of course, tasting wine in Saint-Chinian is just like tasting wine everywhere.  Swirl, smell, sip and smile.  But there is a difference in approach and attitude.  This is a small region in the greater scheme of French wine.  It’s not Burgundy or Bordeaux and doesn’t pretend to be.  But Saint-Chinian makes some rather fine wines in a low-key atmosphere, with enough history to be of interest just because of its longevity.

It pays to get in the right frame of mind to appreciate what you’re tasting, without either over- or under-estimating what can be done with the grapes at hand.  And these principles can be applied around the world in regions with small producers and limited production.

This article is the latest in Power Tasting’s irregular series on great wine bars of the world, although the Maison des Vins isn’t exactly a wine bar.

Just off the main square of the village of Saint-Chinian sits a handsome stone building with a big sign announcing that it is the Maison des Vins du Saint-Chinian, the “House of Wine of Saint-Chinian”.   At first glance, it seems to be a wine shop but it’s not, even though you can buy wine there.  Then you might think it’s the local cooperative, where the local vignerons bring their grapes to be crushed and sold as generic wine from the region.  It’s not that either, but it is the headquarters for the association of growers and vintners of the Saint-Chinian AOC.

Go inside and you will find that it is the place for you to learn about and taste the unique characteristics of the region’s wines, of which more later.  You will be greeted by a staff member whose first task, in our experience, is to size you up.  Are you looking to buy a few bottles or are you there to try their wines?  It’s pretty easy to discern the tourists (they’re not speaking French, for one thing).  And if you aren’t a buyer, are you really there to learn or just to drink some free wine and then leave.

If you, like us, want to learn, the personnel at the Maison des Vins are eager to teach.  What are you interested in, red, white or rosé?  How much do you already know?  What kind of wine do you like?  The servers are all fluent in English, so you don’t have to worry about that.

Before you even get to taste any wine, you’re likely to get a geography lesson.  Your server will explain that the north and east of the Saint-Chinian region is an area of rocky hillsides, while the south and west are level plains.  The soils are schist in the hills and calcareous limestone and clay in the plains, and the qualities of the wines from those two areas differ accordingly.

With some idea of your tastes and level of interest, your server will pour a taste from their extensive rows of wine dispensers.  If you like it, he or she will offer you others like it.  And if not, you’ll get a chance to sample other styles until you’re satisfied.  As you’re tasting, and if you show that you’re interested, the server can tell you all about the vineyard where the wine comes from and the people who made it.  In all likelihood, the farmers/winemakers have been neighbors of the region for generations and all are members of the association and therefore part-owners of the Maison des Vins. 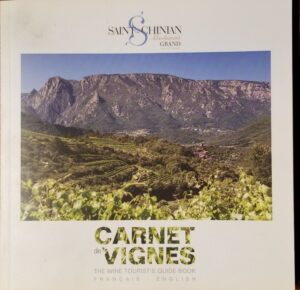 The association publishes a guide to all the member wineries which your server will be happy to give you.  It includes a map, so after you visit the Maison des Vins, you can get in your car (or walk up the street) and go to some of your favorites.  A word of warning: many of these producers are tiny, with their premises on little country roads.  Even with a map, an address, a phone number and a web site, they’re not always easy to find.

The Languedoc is a big place, ranging from France’s Spanish border to the south, wrapping around to the doorstep of Provence to the east.  Approximately in the middle is the village (and appellation) of Saint-Chinian.  (We Americans would spell it St. Chinian.)  It’s a sweet little town that exists in its current form because of the wine trade.  As pointed out elsewhere in this edition, Saint-Chinian makes good but not great wine (that we’ve tasted), so it doesn’t have the lushness and wealth of, say, St. Emilion or Beaune or, for that matter, Healdsburg.

What it has is a sense of French-ness, or better yet Southern French-ness.  Add to it that Saint-Chinian is a typical rural market town and it all makes being there worth experiencing. As you arrive or leave, be sure to take in the ravishing views.  Saint-Chinian sits at the edge of a mountain range (well, hills really).  There’s a real difference between the stony wines in the hills and the softer ones from the valley, which becomes apparent as you drive through. There’s one main street leading in, the D177, that leads into another main street, the D612, that goes out to the vineyards.  In the French naming system, a D-road means Départementale (or regional, in English), which means it’s not much more than a two-way street, so expect to go slow.

The village of Saint-Chinian sits at the foot of a range of small mountains.

Going slow seems to be a way of life in Saint-Chinian.  The only time you’ll see any bustle is on market days, Sundays and Thursdays.  Then the stalls and trucks fill the main square and people come from miles around to shop, socialize, argue (it is France, after all), have a cup of coffee and generally hang out.  There are marchés in many of the nearby villages, but Saint-Chinian draws people from those areas because of its size and perhaps because of the quality of the items for sale.

Selling tablecloths and carpets at the Saint-Chinian marché

Sure, there are fruits and vegetables and, depending on the season, you’ll find the same ones as at home (only better) and then some you can’t find back there, like the late summer mirabelles.  But then there’s a truck selling roast chickens just made right there in the seller’s rotisserie.  And another with a big pan of paella, ready to eat or for dinner.  And salamis.  And sausages.  And, mon Dieu, there are cheeses.  There are also housewares, including the fellow selling mats and tablecloths that we couldn’t resist.

After the market, you can head home and eat what you’ve bought.  But if you’re a tourist, you don’t have a home to go to.  So you just amble down the street to a café.  If the weather is good (and it usually is) you sit under a tree and eat an omelette or a plate of local charcuterie, with a glass of a Saint-Chinian wine, of course.

From there, you can be at the wineries and their surrounding vineyards in five minutes’ drive.  But you might just choose to relax in town and go wine tasting tomorrow.