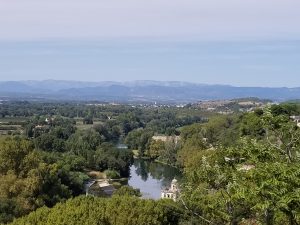 There are so many French wines called Château This and Château That that it’s a surprise to find out, when you visit, that the chateau is little more than a farm house, if that.  Château is the French word for a castle and you would expect that the building on the premises of the vineyard would be at least a great house, if not a palace.

In California, the desire for such grandeur is reflected in some of the wineries’ names, such as Chateau Saint Jean and Chateau Montelena.  (To be fair, the winery at Chateau Montelena is quite grand.)  You can visit Castello Amoroso in Calistoga and see a recreated Tuscan castle, but remember this is the Disney version and all of it is fake.

Or you could go to the Languedoc, in Faugères region, and visit Château Grézan.  From the main road you will see a sign pointing towards the winery and if you look quickly, you’ll see the tops of a few towers.  You’ll drive up a long lane and then, suddenly, King Arthur and the Knights of the Round Table are just before you.  This is the real deal, a castle.  You’ll drive through the large stone gate and park and someone will come to welcome you to taste the wines of Château Grézan (http://chateaugrezan-famillecrospujol.com/).

You’ll have a chance for what the French call a degustation and we call a wine tasting, of which more later.  But first a few words about the chateau.  There has been an edifice here since the 14th century.  In fact, the Cros-Pujol family, owners of the chateau and the vineyards, say that this has been a crossroads since Roman times.  It was a stopping place for pilgrims going to Compostela and it was an important regional base for the Knights Templar during the Crusades.  However, the castle fell into disrepair.  What you see now was reconstructed in 1824, inspired by the romantic vision of the Middle Ages that was rampant at the time.  Okay, Château Grézan is not an 800 year old chateau, but nearly 200 years is good enough for us.

You can sip Château Grézan’s wines in a stone-walled tasting room that is somewhat reminiscent of those in Napa Valley or Sonoma County.  There’s a bar and a table featuring giftware and there’s a rack of t-shirts.  The wines you can taste are red, white and rosé and they come in four categories: Les Icones (icons), La Collection, Les Appellations and Les Secrets de Famille.

The soil of Faugères is rather poor and stony, with schist being the predominant factor.  It gives the wines a spicy finish and they tend to be big round wines in this region.  Château Grézan’s top wine in the Faugères appellation (at least in price) is Les Schistes Dorés.  Oddly enough, we preferred their least expensive wine, the Grezan Rouge, which is a bit softer and more approachable.

There is one wine in the Family Secrets category, called Seculaire, that is 100% Carignan.  It is an unquestionable power hitter and should be aged for eight to ten years before drinking.  It cannot be marketed as a Faugères, since the appellation requires all wines to be blends.

Back in 1666, when Louis XIV was 28 years old and not yet the Sun King, he and his ministers decided to actualize a long-held dream: to connect Toulouse to the Mediterranean Sea via a canal running through the Midi, a familiar name for the Southwest of France.  The engineering work fell to Pierre-Paul Riquet, who is still celebrated in that region, and it was completed by 1681.  All of which is mildly interesting history, except for the fact that you can boat, live and walk or bike along the Canal du Midi today.  If you are visiting Languedoc for wine tasting, leave yourself some time to enjoy the canal as well. 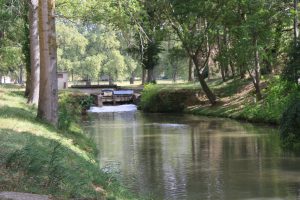 For the most part, the canal wends its way through shady glades and lovely little villages.  Life does not go very fast along the Canal du Midi.  It is 240 km. long but only 10 meters wide, just enough for two rather narrow boats to pass by.  You couldn’t go fast if you wanted to, unless you wanted to smash your boat against one that is anchored on the side, drown in a lock or take your head off passing under a low stone bridge.  So you are forced to slow down your inner clock, take it easy and enjoy the scenery.

Sometimes the best part of that scenery is the willows and reeds along the banks.  On others, it’s the pretty small villages along the canal and also the glimpse of castles and cathedrals off in the distance.  And if you’re walking or biking along the banks rather than boating, there are pleasant pathways that give way to breathtaking vistas especially, so we have found, as sunset approaches.  Both the boaters and the walkers seem to enjoy a friendly wave as they pass one another. 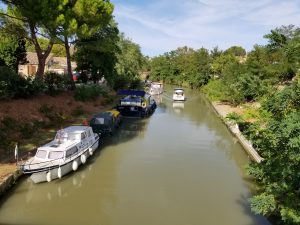 Our personal experience has been to take a tour from just outside Toulouse to a turning point half way to Carcassonne.  It’s only 30 or so kilometers and can be driven in a half an hour, but it took us all day.  There are other, similar tours all up and down the canal.  Make sure you find one that goes further than just around the sections that are in urban areas.  Nothing against cities, but the joy of the canal is the French countryside as you glide by. We have also spent time in a house along the canal, which was wonderful. 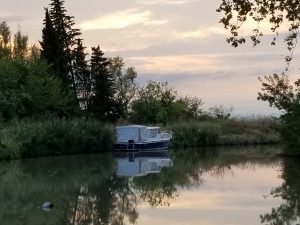 Another idea is to make the Canal du Midi the vacation itself.  We haven’t done it ourselves, but we know that you can rent a boat (called a péniche) and pilot yourself along the canal.  There are dinky little boats available as well as large cruisers that sleep up to 10 people, although we mostly have seen parties of six or fewer.  From what we can see from the banks, the most popular rental agency is the unimaginatively named company, Le Boat (www.leboat.com).

There are numerous places along the canal where you can pull up and spend the night or a few days.  If you are next to a village, you can pick up groceries or have your meals in cafés or serious French restaurants that line the shores.  It’s the best fun you’ll ever have in the 17th century.

Languedoc is in the southwest of France.  Until the 13th century, it was considered as a separate entity, Occitania, home of the troubadours, easy living and rich food.  There are no more troubadours, but the rest remains.  It is today the part of France with the greatest production of wine grapes.  The wine producing area is very large, stretching along the Mediterranean coast from the west of the Côtes du Rhône to the Spanish border and inland, at its furthest extreme, beyond Carcassonne.

Wine has been made here since this area was colonized by the Greeks.  Today, for the most part, the grapes grown here are of the Rhône variety: Syrah, Grenache, Mourvèdre, Cinsault and Carignan in red; Marsanne, Rousanne and Viognier in white.  There are more than 30 sub-regions recognized as AOCs (Appellations d’Origine Contrôlée), which are much the same as AVAs in the United States.  There are even more sub-sub-regions, called Indications Géographique Protégée, which are not quite as well recognized but may still make some excellent wines.

Sadly there was a time, not that long ago, when wines from the Languedoc were rough, alcoholic, sour and for some people, better used for cooking than drinking.  We are pleased to say that this is no longer the case.  The reason, as we see it, is the advent of organic winemaking in the last 10 to 15 years.  Referred to as bio by the French, it has sparked a revolution in Languedoc wines.  It may be attention to detail, more intense vinification techniques, stainless steel tanks or just plain cleanliness but the wines of the Languedoc today have little to do with the past.

Now, so we have found, there are many excellent wines to be had in red, white and pink.  And the prices are not to be believed.  For example, we have been drinking a rosé that Lucie in particular has enjoyed (Domaine l’Espinel) that costs less than five euros ($6).  There are some really interesting reds and whites for which the top  price we have seen is around 25 euros ($30).  Perhaps none of them are enough to make the great Chateauneuf du Papes worry, but they are really fine wines, full of complexity and depth and ready to drink now.  We think they will age well, but they may in fact be at their peak in a few years after harvest.

The wine tasting experience is a revelation.  The wineries are not crowded.  In fact in September, at the time of our visits, there have been no others sharing the tasting rooms with us.  And every winery seems to make eight to ten wines and the server wants you to try them all.  It does help to speak French, but we have found that all the servers are eager to try out their English.  Plus, most of them do not charge for tasting.

The Languedoc is sunbaked and can be quite warm, especially in the summer months.  Of course, this produces wines that are particularly flavorsome.  It is not California, with wineries lined up on highways.  No, on the contrary, you may have to drive around, get a little lost, and find wineries spaced out rather distant from each other even within AOC regions.  On the other hand, you are likely to make discoveries that you will remember warmly and search for in wine stores for years to come.  We have found that, for the most part, only the lowest quality wines on any vineyard’s list are the ones exported to North America so a wine tasting trip is likely to open your eyes – and your nose and tongue – to some delightful new experiences.