Sometimes you consume wine standing up.  At a bar in a tasting room.  At a barbecue.  At a party.  More often, for most people, you drink wine sitting down.  At the dinner table or in a restaurant.  Increasingly in wineries at tables in a tasting room.  On our porch on a late summer afternoon.

In almost all those cases, you drink wine with others you know or at least would like to talk with.  But in a certain type of wine tasting adventure, you find yourself sitting at a long table in a luxurious room, sipping wine with complete strangers.  A number of wineries offer seated tastings, by appointment only, often with accompanying foods, usually combined with a tour.  These are generally tastings at wineries that are (or aspire to be) among the elite, including wineries such as Jordan and Cain in California and Biondi-Santi in Italy. 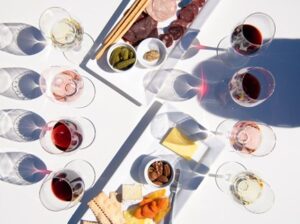 There is an etiquette to these gatherings that is worth thinking about.

California is a state with many thrilling cities: San Francisco’s hills, San Diego’s sailing and Hollywood!  Alas, Sacramento is not thrilling unless you’re a politician, Sacramento being California’s capital.  But if you come for a visit without overwhelming expectations, the city has much to offer.

For one thing, it is ideally suited as a base for wine tasting.  It’s pretty much in the middle of Amador County, Lodi and Napa Valley.  If you don’t mind driving a bit, they’re each about an hour away from downtown Sacramento.  Because of work requirements we had the opportunity to live there for several months.  It gave us the chance to see the city as a bit of a throwback to the California of yesteryear. 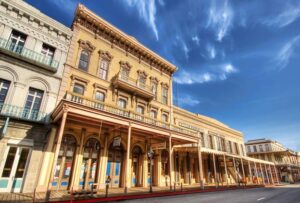 The Old Town section is a very deliberate recollection of those times.  It’s a state historic park, where they have carefully preserved commercial buildings from the mid-19th century.  That date is important because of the great Gold Rush of 1849 that turned Sacramento from a sleepy Spanish mission town to a bustling metropolis.  Today, Old Town is a bit (well, more than a bit) touristy, but the buildings are real and you can try to imagine what it must have been like when the miners came into town.

Sacramento is located at the confluence of the Sacramento and American Rivers. It has badly flooded many times.  It seems that California either has a drought or way too much rain.  If you hit a rainy period, you can walk along Old Town’s riverfront and see the Sacramento threaten to spill over its banks.  It happened often enough that the city leaders raised up the Old Town section in its entirety, so you probably won’t have water lapping at your ankles (or higher) when you’re there.

One real attraction there is the Railroad Museum, with several old steam engines to gawk at.  You can event take a ride on an old train, up the Sacramento River.

The Crocker Art Museum is the oldest museum west of the Mississippi River, founded in 1885.  It has a rather nice permanent collection, many paintings from artists in the bay area and often hosts interesting exhibitions.  For a tourist, it’s good to know that you can easily take in the whole museum in an afternoon.

Sacramento is in an interesting place for eating out.  It is at the north end of California’s Central Valley, known as America’s Salad Bowl.  Thus there are many restaurants that feature “farm to fork” dining.  And if you have a bite or a drink near the Capitol, you’re very likely to be able to listen in as some politicos talk over the affairs of the day. 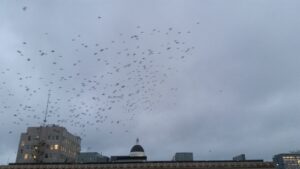 The crows come in at sunset.

We loved a particularly unique Sacramento experience.  Right at sundown every day, thousands of crows fly in from the fields surrounding the city.  They have predators outside the city but a lot less in town, so they congregate in the area around the Cathedral at 12th Street and K, not far from the Capitol.  For about five minutes each evening, a thick cloud of birds, cawing like mad, settle in on the roofs, trees and lampposts.  Then they shut up and go to sleep.

There are some wineries you visit for the gorgeous views.  Others have unique architecture.  Some (not our favorites) cultivate a party atmosphere.  You go wine tasting at Cakebread Cellars (www.cakebread.com) for the wine.

Now, Power Tasting does not do wine reviews, but it’s fair to say that Cakebread makes some pretty fine wine.  They’re best known for Cabernet Sauvignon and we’ve enjoyed their Pinot Noir in the past.  The winery building itself is pleasant enough, but not such an architectural wonder that you’d make a special trip.  The big attractions are an attention to wine tasting as a unique activity and some of the most knowledgeable servers we have ever encountered. 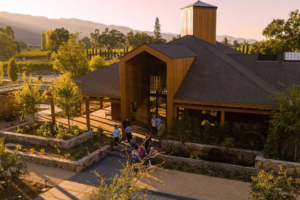 In the past, we have always indulged ourselves with the reserve tasting.  The ability of the servers to understand each visitor’s level of knowledge and interest and explain the wines in alignment with the individual, have always impressed us.  We don’t know if it is still the case, but pre-pandemic we learned that all the servers in the reserve room were qualified sommeliers.  In one case, a server showed us a book on wine that he had written.  Impressive, right ?

These days the reserve tasting is supposedly limited to Cabernet Sauvignons and they do pour quite a few of them.  We’ve found that there’s usually some other interesting wine behind the bar, just for contrast.  On one visit, we expressed disappointment not to taste their Merlot, so the server ran out and got a bottle to open for us.  This is indicative of their attitude about wine tasting and towards their guests. They clearly enjoy sharing wine and experience with people.  As a visitor, you cannot help but being caught up in their enthusiasm.

We have not tried it, but Cakebread now has a seated group tasting, highlighting library wines.  We’re sure it lives up to the experiences we have had.

Cakebread is very serious about their “by appointment only” policy.  While many wineries use the limitation as a way of managing crowds, at Cakebread no reservation means no tasting.  Of course, this gives the staff the opportunity to really focus on the people who do call or email in advance.  We recognize that the ways and manners of Napa Valley wine tasting have changed since our earliest wine tasting days.  Still, there’s a different feel to such formality that doesn’t always sit well with us.

Jack and Dolores Cakebread were among the pioneers of Napa Valley winemaking back in the 1970’s.  Their sons now run the enterprise, which has grown to include vineyards as far afield as Howell Mountain and Anderson Valley.  Cakebread’s all wood winery building pays homage to those old days, so you can still feel a little of the vibe even if today’s reality is somewhat different.  Cakebread Cellars is an expression of what Napa Valley was and what it has become.  For lovers of the distinctly Californian style of winemaking, this winery is definitely a place to visit.

Wineries are in several businesses.  Of course, their basic business is making and selling wine.  In this regard, their competition is other beverages, from soda pop through whiskey.  Mostly it’s alcoholic beverages consumed in a social setting, with beer brewers their primary competition as an industry.

They also make a substantial amount of money from wine tasting, which is Power Tasting’s subject.  Wineries are in the business of tourism, which is why we now see so many resorts opening in Wine Country.

So when we wine aficionados go wine tasting, we are certainly drawn to specific wineries by the quality of the wine being served.  To a very great extent, we also choose one winery to visit over another based on the overall experience we expect to have there.  Beyond the wine, we are attracted to the obvious big things: location, architecture and other attractions, such as art or panoramic views. 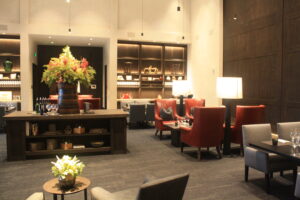 At a much more subtle level, the various amenities offered by a winery make a great deal of difference to the way we feel as we remember our experiences and plan to return.  The first and ultimately the most important is the personal interaction we have with the servers and other employees.  They should make a visitor feel more like a guest than a customer.    No one wants to feel looked down upon or intimidated. To our experience most do a good job of hospitality, but we have experienced some notable exceptions.  We have never returned to those places.

A tasting room should express the personality of the owners.  As more and more winemakers are taken over by big corporations, the tasting rooms have become visitor centers, located in palatial buildings that feel more like show rooms than friendly places to gather and sip.

If the owners collect art or horses or musical instruments or race car paraphernalia, they should share their collections with their guests.  Equally, the more humble wineries that are extensions of farms (which is all a vineyard is) should be rustic without being shabby.

At the most elemental level, wineries should show consideration for their guests no differently than each of us would do in welcoming friends into our homes.  The tasting rooms should be clean and tidy.  Double that for the bathrooms.  We appreciate shady places to park.  If there is bar service, there should be a place to sit if one wants to.  There should be accommodation for those with mobility issues.  Some sunlight is always appreciated as well as a view of the vines or the town, depending on location.

The little things add up, often in a subliminal manner.  Wine tasting venues in our times is about entertainment almost as much as wine.  Serving wine in the barn on a plank and two barrels might have been the way things were done 50 years ago, but in those days the wineries weren’t charging you to sip their wines nor selling their products for three-figure prices. Most winery owners understand that the experience is a part of their business model.  The others need to catch up.