Power Tasting isn’t really about reporting the news, but we feel we owe it to our readers to give a description of what it’s like to go wine tasting in early 2018, in what we like to call Napa/Noma.  The fires that ravaged many areas of Napa and Sonoma Counties are out now, and if you smell smoke, it’s probably from people’s fireplaces.  If you don’t go searching out the most badly damaged areas such as Atlas Peak in Napa and Fountaingrove in Santa Rosa, you would not particularly know that the conflagrations occurred.

There are, of course, numerous signs that they did.  There are billboards announcing fire-related charities and lawyers to help with cases.  Most poignant for us was what we didn’t see: as we drove up Route 101 in Santa Rosa, the Hilton we used to stay at and the nearby landmark, the Round Barn are no longer there.  Considering the loss of life and those made homeless, these are certainly lesser tragedies, but for frequent visitors such as ourselves, they are stark reminders of what happened there. 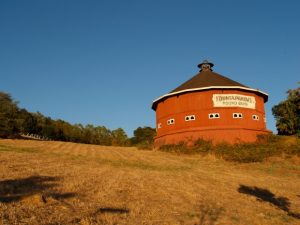 The Round Barn, before the fire.  Photo courtesy of the San Jose Mercury News.

At the same time, for those wondering whether to go wine tasting in the affected areas, the answer is definitely “yes”.  For one thing, it’s a chance to aid the local economy that is still feeling the shock.  For another, you get the chance to speak with the people who lived through the disaster and hear their personal stories.  Interestingly, the people we spoke with all knew someone who had experienced significant losses but did not themselves.  With a few lamentable exceptions, almost all the wineries were spared.  Even more remarkable, there was very little damage to the vineyards, although one well-known producer did tell us that they lost a few rows in one of theirs.

The rest told stories of extremely hard work, miraculous escapes and good news for the 2017 release.  Over and over we heard that a vineyard had just been picked the day before the flames came. One did admit that a portion of their crop at one sourced vineyard had been left on the vines because it was impossible for the trucks to get there.  For the most part, we heard that the grapes had been crushed and were in barrels before the fires occurred.

We are wine tasters, not growers or makers.  We are nonetheless concerned as to how the 2017 vintage will turn out in Northern California.  A new term has entered our vocabulary, “smoke taint”, which is different than the pleasant smokiness in certain wines, particularly Northern Rhônes and Pinot Noirs.  It’s a highly unpleasant taste, so we’ve read, akin to licking the bottom of a well-used ashtray.  It will be a few years before we learn whether Napa/Noma wines are affected.

If you go wine tasting there now, you’ll be offered 2014’s and 2015’s, with perhaps a newly released 2016 available.  We can happily report that we tasted a 2017 Sauvignon Blanc at Rochioli in Russian River and the taste was grapefruit, not smoke, and it was delicious.

It will be hard to forget these terrible fires, for years to come.  But the fact is that if your goal is wine tasting, you can visit Napa/Noma without fear.  It looks and feels the same as ever, even if the usual pleasures are mixed with more than a bit of sadness.

Ridge (https://www.ridgewine.com/) is best known, perhaps, for fine Zinfandels and Zin blends.  Or maybe you know that Ridge Montebello, their premier Cabernet Sauvignon, was among the wines at the famous Judgment of Paris taste-off in 1976, and the winner when the wines were re-tasted in 2006.  Ridge’s Montebello winery is a bit off the beaten path in Cupertino, California.  Wine tasters are more likely to be in Sonoma County, where Ridge’s other winery is located, right on the border of the Dry Creek and Alexander Valleys.

The vineyard itself has quite a history, with grapes planted there as early as 1901.  Paul Draper, the illustrious (and only) winemaker at Ridge, first bought grapes from the previous owner in 1972 and then bought the property in 1991.  For a long while, the tasting room was literally a plank between two barrels in the aging room of the winery.  Today it is a sleek, wood-paneled bar nestled among the vines, where a significant selection of wine are available for tasting.  On the opposite side of the bar is a glass window wall overlooking the old Zinfandel vines, a source of beauty in itself. 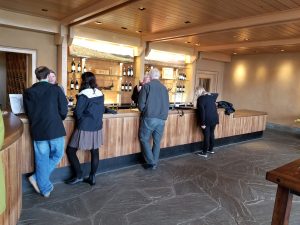 There are several hallmarks to Ridge’s wines:  all but one are from single vineyards (their Three Valleys is the exception).  Many are estate wines, especially the Lytton Springs from the property where you taste wines.  Some have acquired quite a reputation, such as the Pagani Ranch or the Independence School and others are rather obscure small bottlings, like Boatman or Buchignani.   They make wine from many varietals, but are best known for Zinfandels and Cabernet Sauvignons.  Many of the Zins are blended with other grapes such as Carignan and Petite Syrah, enough so that they fall below the 75% requirement to be sold as a single varietal.

One of the beauties of a visit to this winery is the number of different wines you can try.  Yes, there is a Chardonnay, but really a visit to Ridge is about red wines. There may be as many as seven or eight Zinfandels available, which by itself is a lesson in the variety of flavors that can be extracted from this grape, a specialty of California in general and Dry Creek in particular.

The climax of a tasting at Ridge is their Cabernet Sauvignons.  The Estate Cab is usually included in a tasting, but if you want to know what the Montebello tastes  like, you’ll have to pay an additional fee.  It’s worth it, if only for the bragging rights. Do not leave Ridge without tasting it.  It certainly crowns a wine tasting experience.

We have found the servers to be enthusiastic and knowledgeable, but unfortunately have to report that on a few occasions we were served by someone seemingly uninterested in serving and helping us.  That experience underscores the importance of the server in the quality of your visit.

A visit to Ridge in Lytton Springs can be the highlight of a day’s tasting adventures, especially if you’ve never had the chance to compare their wines, one with the others.  Even if you have visited Ridge many times, as we have, there’s always at least one wine to try that will impress you, and the Montebello to blow you away.

One of the great things about touring in Wine Country is that you can generally expect lovely weather, if a bit hot.  Making great wine requires plentiful sunshine, so that’s what you’re likely to get when you go wine tasting.  However, into every vineyard a little rain must fall; after all, the grapes need water too.  So if you wake up to find it pouring and the weatherman says it’s likely to continue all day, what are you to do?  You’ve come to taste wine and perhaps today is the only day you have to indulge yourself.  You could just give up and go home, but why?  Pretty much all tasting rooms are indoors, after all.  (Iron Horse Winery in Sebastopol in Sonoma County, is the maker of some pretty good sparkling wines and is the exception.  Their tasting “room” is outdoors, so maybe it’s not a super choice for a rainy day.)

So if you’re facing a day of fine wine mixed with rainwater, here are a few things to keep in mind. 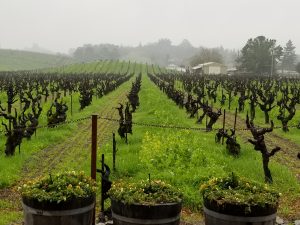 Overall, the message is to make the most of a bad day and enjoy your tastings anyway.

This is another in Power Tasting’s series on the best time of year to visit Napa and Sonoma Counties for wine tasting.  The answer is that there is no “best” time; each month has something special to offer.

One thing to be said for wine tasting in Napa/Noma in February is that you’re one month closer to warm weather than you were in January.  It’s still winter to be sure and you are more likely to get a rainy day in February than you are in the summer.  But we have also experienced some wonderfully warm days in February, when with a sweater or light jacket you can sit outside and enjoy your wine under blue skies.

A particular advantage of going wine tasting in February is that many of the wineries issue their new releases that month.  We have always made sure to include a visit to Heitz Cellars in St. Helena in February, because that’s when you get to taste the Martha’s Vineyard (although we have recently found it in recent visits in other months as well).  Of course, there is a cloud to this silver lining; new releases haven’t had a much time in the bottle.  You’ll have to bring your imagination with you to have an idea of what these young wines will taste like when they grow up.

Another advantage is that the mustard is in full flower in the vineyards, a lovely sight to compensate for the absence of leaves and grapes on the vines.  The yellow flowers brighten up even the coldest day.  And yes, it can get fairly cold in February, despite the possibility of warmth – and often on the same day! 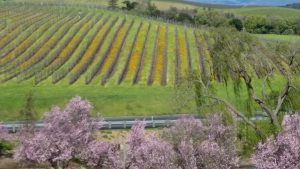 Mustard in the vineyards and lilac on the trees, as seen in February at Domaine Carneros.

That hot restaurant where it’s impossible to get a table in June has lots of empty seats in February.  The streets of Yountville and Healdsburg aren’t as crowded with tourists; you can actually take time in front of the paintings in the galleries; and the salespeople in the gift shops are actually glad to see you.  Many hotels have special package deals.  On the other hand, February has Presidents Day weekend and then every place is as full as in high season.  That weekend may be your only chance to get away for wine tasting, so anticipate the crowds.  If you can choose another time, especially midweek, we recommend you do so.(We experienced it and it was very unpleasant.)

You’ll get more attention from the servers in the tasting rooms those days.  In particular if you’re tasting on a cold miserable day,  the servers may be so glad to see anyone that you’ll be treated like visiting royalty.  To be fair, that advice applies more to smaller, out of the way wineries.  The big ones, especially those that take busloads of visitors, are still likely to be packed. 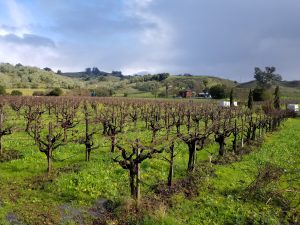 Everyone has a different idea of what constitutes cold weather.  If you’re a Floridian or a Southern Californian, February in Napa/Noma is definitely the depth of winter.  But if you’re a New Yorker or a Québécoise, a day when you can walk around outdoors sporting only a sweater is the first sweet breath of spring.  No grapes on the vines?  Forget about it; the buds will surely be breaking soon.  You can have the satisfaction of having your wine tasting vacation sooner than anyone else and the pleasure of doing so without the crowds.