If you’re driving north from Los Angeles to go wine tasting in the Central Coast, you will probably pass through or near to the town of Solvang.  If you’d like to do something different and just a little strange, get off the freeway and visit.  In the early part of the 20th century, a group of Danish families emigrated to Santa Barbara County’s Santa Ynez Valley and set up farms.  The Danes set up a town called Solvang that reminded them of Denmark, with architecture, churches and food stores evoking their homeland.

Of course, when you have a place that is a bit exotic and quite scenic, tourists will follow.  So while the farming tradition of the area around Solvang is very much alive, the center of town is an attraction, one verging on cutesy.   The buildings are half-timbered and the windmills actually turn.  There’s a replica of Copenhagen’s famous Little Mermaid, and a bust of Hans Christian Andersen and restaurants where you can get smørrebrød, the famous open-faced sandwiches that are a staple of Danish fare. 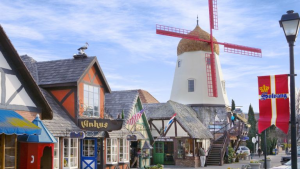 We have recently been in Denmark and can assure you that Solvang has no more to do with that country than Las Vegas does with France.  Still, this doesn’t take away the pleasure of pretending you’re in Denmark.  Solvang really is pretty and it really does have its roots in Danish-American history.

Solvang may be an out of the way little town for many California visitors, but not for those who are there for wine tasting.  It is located at the doorstep of the Santa Rita Hills, which is the source for some very fine Pinot Noir and Chardonnay.  Many of the best wineries in the Santa Rita Hills have tasting rooms in the city of Santa Barbara, enough so that travelling to the vineyards for tasting purposes is unnecessary.  But if you like looking at rows of vines while you taste, Solvang can be a good place from which to travel into the Santa Rita Hills.  Moreover, it’s a short drive to Los Olivos and you’re already in the Santa Ynez Valley, so you’re right in the middle of Wine Country when you’re in Solvang. 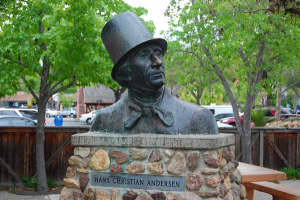 You don’t even have to leave Solvang to go wine tasting if you don’t want to.  There are at least a dozen tasting rooms in the town, of varying quality.  (Au Bon Climat used to have a tasting room there but has since moved into Santa Barbara.) We would advise that the reason to taste wine in Solvang is more about the atmosphere than the wine itself.

Wine Country is about wine, to be sure, but there are usually other things of interest, worth a visit.  You wouldn’t go wine tasting in Champagne without going to  Paris or in Tuscany without seeing Florence or Siena.  So it’s pleasant to take some time to visit a town like Solvang if you’re wine-tasting in the southern end of California’s Central Coast.  Okay, it’s not Paris or Florence, but Solvang and the Santa Ynez Valley can offer a pleasant way to spend a day of vacation or a weekend besides wine tasting.

Here’s a really bad idea: drive all over California visiting one wine tasting region after the other.   It could be tiring and after a while, you can’t remember what you tasted and where.  We did it and the reason we did it wasn’t wine tasting; Steve had a client that wanted him to visit all of its offices around the state and we just took advantage of being there to taste each region’s wines.  We’re not going to present a travelogue here, but we will offer tips on how to take the most advantage of your travels in California if this ever happens to you. 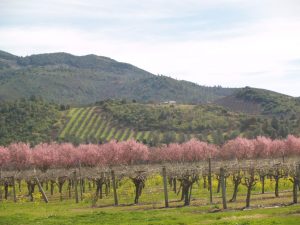 Tablas Creek Vineyard is unabashedly a corner of southern France plunked down in the middle of California, in Paso Robles to be exact.  It is owned by the Perrin family of the southern Rhône valley (along with American wine importer Robert Haas).  The Perrins are particularly known for one of the most renowned Châteauneuf du Pape wines, Château de Beaucastel.  This history is important because of the vines that the family brought to the Central Coast from France.  Going back to 1985, Haas and members of the Perrin family sought vineyard land and imported root stock.  While the vines went through quarantine, the winemakers determined that the western fringe of Paso Robles was very similar in climate and soil – the terroir – to that of Châteauneuf.

Today, California’s Central Coast is revered for its Rhône-style wines but it was not always so.  In fact, it was the vision and generosity of the Tablas Creek owners that established these wines in that region.  Paso Robles has long been known for Zinfandel, and still is.  The Tablas Creek people realized that one good Rhône winery would be an outlier; if the region did well with Grenache, Syrah, Mourvèdre and the other Rhône grapes, everyone would prosper.  Thus they sold their vines to other wineries in Paso Robles.  If this seems reminiscent of Robert Mondavi and Napa, so be it.

Visiting Tablas Creek has its challenges as well as its rewards.  Paso Robles is pretty far from major airports (three hours south of San Francisco’s) and Tablas Creek is a fairly long drive from downtown Paso.  Driving there along the Adelaida Road (Tablas Creek is in the Adelaida AVA) is very beautiful and there are quite a few excellent wineries along the way, so does it make sense if you only have a little time to visit to go all the way out to Tablas Creek?  In a word, yes.

You never forget while you’re at Tablas Creek that you’re in California, but there is a great deal to remind you of France, beginning with a signpost at the entrance that tells you that the tasting room is nine yards away and that Domaine de Beaucastel is 9009 kilometers.  There are posters and other souvenirs for sale, heralding Perrin’s French labels like La Vieille Ferme, their basic Rhône wines.  That French identity carries over into the Tablas Creek wines, which come close to tasting like actual Rhône wines (as opposed to California Rhône Rangers that taste like California wines made from Rhône grapes). 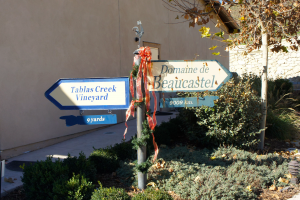 The tasting room is Mediterranean-style building and is expansive, while the wooden interior still somehow makes it feel warm and inviting.  They also have a terrace with umbrellaed tables where picnicking is welcome.

If you are not familiar with Rhône-style wines, a visit to Tablas Creek is an education.  Tablas Creek’s wines are perhaps a little more Mourvèdre heavy than in southern France, but the character certainly evokes Châteauneuf de Pape.  That is especially so, in our opinion, for the Esprit de Tablas, which until a few years ago was called Esprit de Beaucastel.  The Panoplie is their highest priced wine, and to us tastes richer and bolder than we have tasted in wines from the Rhône valley; it is more California than France.

Even more evocative of California wine sensibilities are the single grape varietal wines.  If the bottles are open, you can taste grapes you know, like Cabernet Sauvignon and Pinot Noir, and many that may be unfamiliar to you, like Counoise, Grenache Blanc, Picardan and Tannat. 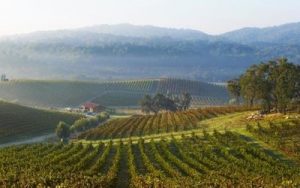 There are stunning views to be had at Tablas Creek, nestled in the foothills of the Santa Lucia mountains.  That, taken together with the French atmosphere and the unique wines, make the long hike to Tablas Creek worthwhile.

If you love going wine tasting, as we quite obviously do, and if you enjoy telling friends about it, you will inevitably be asked whether you have seen the movie Sideways.  Well, yes we have and we liked it quite a bit.  But since the movie may be all your friends know about a wine tasting trip, you owe it to them to point out what is and is not realistic about it. 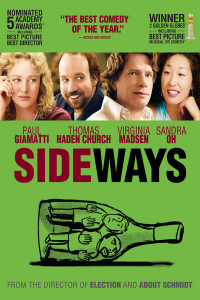 First, the film gives you the idea that people who visit Wine Country for tasting are jerks and geeks.  (We deny being either.)  In our experience, the jerks are most often people who want to drink rather than taste and have often been previously overserved.  Most wineries are pretty good at dealing with this sort, for their own protection and to preserve the positive experience of other visitors.  As for geeks, these are often normal people who are enthusiastic about one topic – wine tasting, in this instance – and are eager to share it.  As long as they aren’t intimidating wine snobs, they are usually nice to deal with.

Often, people will tell you that they really liked what they saw of Napa Valley in the movie.  However, the wineries and other locations shown in Sideways are from the Central Coast, in and around the town of Los Olivos.  This is a wonderful sector of Wine Country, with Pinot Noir and Chardonnay grown to the west and Syrah to the east.  There are some excellent wineries in the movie such as Fess Parker, Foxen and Firestone, well worth visiting.  But they are hardly representative of California wine tasting as a whole.  In particular, the town of Los Olivos is unique.  It’s a quiet little California village that just happens to have an exceptionally high concentration of tasting rooms along its Grand Avenue.  This is an opportunity for some interesting wine tasting, but this kind of atmosphere usually is found in urban settings, not a small town like Los Olivos.

What we find most evocative in the movie is the passion for wine experienced by its protagonists (well, some of them).  The scene in which Paul Giamatti and Virginia Madsen explain what wine means to them is eloquent and affecting.  Of course, you would be eloquent and affecting too if you had script writers.  All the same, there is a spirit of seeing beautiful scenery, trying fine and not so fine wines and eating Wine Country meals that comes through in Sideways.  That spirit is instantly recognizable to those of us who go wine tasting often.

There is much in the movie that evokes the real experience of wine tasting, despite the characters’ love lives and other shenanigans.  Probably the worst thing in the movie is what it did to Merlot production in California.  The fellow who keeps crying “No more Merlot” is a Pinot Noir lover, fair enough, but he doesn’t really know what merlot tastes like, as shown by the St. Emilion he drinks at McDonalds.  That’s right, it’s made primarily from Merlot grapes.

So when Sideways comes up in conversation – and even thirteen years on from its debut, it will – tell your friends that it’s a fun movie and that some of it actually reflects your own experiences in Wine Country.  Then suggest that they take a wine tasting trip and experience the real thing for themselves.