Of course, you can always taste wine at home.  We do so every day, with our dinner.  But that’s not the same thing as a wine tasting.  A true wine tasting requires more than glasses and bottles.  It requires attention to the aromas and tastes that emanate from your glass, to the way the glass affects your senses, to the color and viscosity of the liquid and, most of all, to the pleasure one wine gives as differentiated from another.

So since you won’t be in a winery’s tasting room in the immediate future, here’s an idea for having a wine tasting experience in the comfort of your own home.  It will work at any time, and we have tried it out in the past.  It’s particularly fun in these difficult days. 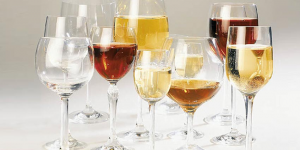 Reidel is surely the world’s largest manufacturer of quality stemware (and some wares without stems).  We’re not sure how many different types of glasses they make.  We looked at their catalog and stopped counting when we realized that they make hundreds of different kinds.  No one, maybe not even the Reidel family, uses hundreds of glasses but if you do have several in your cabinet, it’s a lot of fun to test them with the same wine, one next to the others.

With wineries shuttered in California and much of Europe, it seems somehow wrong to review a particular wine tasting establishment this month.   (Was it only a month ago that we were happily writing about Far Niente?)  So we have taken a backward glance at all the wineries we have visited over a lifetime of this wonderful diversion of wine tasting and suggest our idea of the perfect winery visit.  If there is a winery in heaven, this is it.

The perfect winery would definitely be situated in the midst of a verdant vineyard.  You’d enter the property up a long driveway, with vines on either side.  And of course, we’d be there in early September, so the vines would be heavy with grapes.  A good example can be found at Trefethen, in Napa Valley’s Oak Knoll AVA. 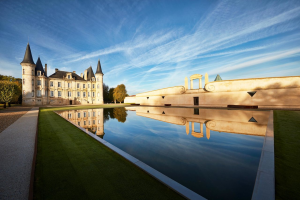 The building itself would be real, not a castle built to impress winery visitors.  Chateau Montelena in Calistoga is probably the most beautiful we have visited.  It was a rich man’s mansion in the 19th century and has been used for winemaking since the 1970’s.  Of course, it might actually be a castle, or rather a château.  There are many such to be found in Europe, especially in France of course.  It’s tough to choose just one, but we are especially taken by Château Pichon Baron in Bordeaux.

In addition to the beauty of the building, the perfect winery would have an artistic or cultural attraction at a level consistent with the quality of the wines.  A tour at Mouton Rothschild includes a visit to their museum of wine art, but we cannot think of a winery-cum-museum that can top Hess Collection in Napa.  The display of modern art, mostly abstract, would be right at home at any art institute in the world. 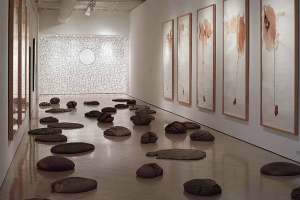 Photo courtesy of the Hess Collection.

The tasting room would not be a bar.  It would look like and feel like a plush but refined salon with beautiful furnishings.  You’d be welcome and made comfortable, with a server who has a great deal of knowledge not only about their offerings but about wine in general, a real sommelier or educator.  There are many tasting rooms like this that we’ve been lucky enough to see in our travels, but Jordan in Alexander Valley sticks in our mind as our favorite.

And then there would be the wines – what wines!  In the whites, there would be Dry Creek’s Sauvignon Blanc and Etude’s Heirloom Chardonnay.  Beringer Private Reserve would be the Cabernet Sauvignon they’d serve, and the Bordeaux blend would be (naturally) a Bordeaux from Château Margaux.  There would be some Boisrenard de Beaurenard for Rhone-style red wine.  Sangiovese fans would be treated to a well-aged Biondi-Santi Brunello and those with tastes for Spanish wine could enjoy a Vega Sicilia.  Oh, yes, there would be Château Yquem for dessert.

Hey, you can’t blame us for dreaming, especially in times like these.

Each month Power Tasting features a Place to Visit.  It’s in Wine Country somewhere, but is not necessarily wine-related.  We’ve taken you to small villages, medieval cities, a trade show and great wine bars.  This month, we’d like to suggest that everyone take a very close look at a very special place: your own immediate neighborhood.

We live in Manhattan’s West Village sector.  When it’s not raining, we take brief walks and we get to see our neighborhood in a very different way.  The streets are almost deserted, both of cars and pedestrians.  There are more people in the park than we’d like, so we avoid it most of the time.  Some people are wearing masks; most aren’t. 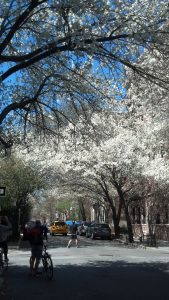 But it’s still New York and it’s still spring.  We don’t know a lot about flowering trees but we think Google is telling us that the white ones are calley pear trees and the pink ones are well, pretty pink trees.

We’re walking along streets we don’t usually take.  Even though West Street is on one side of our apartment building, we don’t usually walk there because there’s really no place to go.  Normally, the traffic on this major artery alongside the river is quite heavy, so a walk amidst the fumes isn’t very inviting.  But with the traffic almost all gone, it’s more pleasant, even though there’s still nothing very interesting along it.  But with our horizons shrinking in, we have found a little spot where the city has planted a mini-garden and a park bench, sadly often occupied by a homeless fellow.  There are a few restaurants we have pledged to try when the city re-opens.  And we’re seeing the back end of the Whitney Museum, a view we don’t usually get.

When we have gotten into Hudson River Park on a bright sunny day, we see New York in suspended animation.  There’s the biergarten that will hopefully return with warmer weather.  An interesting statue of the New York symbol, the Big Apple.  The river itself, with fewer boats than usual.  Two long piers, one that reaches well into the Hudson and provides stunning views of the city.  Remember, all these sights are not more than ten minutes from our door, on foot.

We live along the Hudson River

New York is all about BIG.  But these days, we’re seeing New York in miniature.  We take the time to notice the 19th century row houses, the cobblestone streets, the tall, new glass-and-steel apartments and the chipping paint on some of the older ones.  We know those things were there before but now we’re seeing them as the only parts of outdoors that are readily available to us.  Quite frankly, we look forward to the time when we will walk by these things without taking special notice.  When we’ll smile at passers-by, not walk into the street to avoid breathing the same air as they do.  When we can board a plane and go wine tasting.

It will be better someday.  But our neighborhood will always be a place to visit.  And then, when you do, you’ll be able to stop in a trattoria for a glass of wine.

Like everyone else, we’re staying home. Yes, we go out for walks around the neighborhood and in the park across the street.  But there are still too many people about and not enough of them are wearing masks.  So mostly we’re indoors.  Here are some wine-related activities we’re engaging in (different than usual in some respects) that you might be doing as well.  And please send your ideas for other blues-chasers to lgsjr@powertasting.com or leave a comment here. 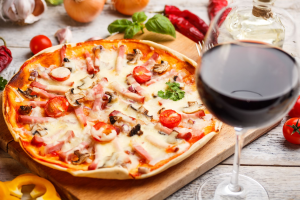 Photo courtesy of The Spruce Eats