If you are going wine tasting in the easternmost part of France, you’ll be in Alsace, where they grow white wine grapes, mostly Riesling and Gewürztraminer.  Now, those are German grapes, which is fitting because over the centuries Alsace has gone back and forth from being a part of Germany to being a part of France.  It’s been French since the end of the First World War, but was German for 50 years before that.

The principal city of Alsace is Strasbourg.  It looks very German in its architecture, but the feeling there is joie de vivre, not gemütlichkeit.  Alsace generally and Strasbourg in particular feel like Germany with French people.  And the food is a blend of the two as well.  There is the expression “to be stuffed like a Strasbourg goose”, perhaps because that’s how you get fois gras, the emperor of all patés.  The dish that Alsace is best known for, though, is a mixture of sauerkraut and smoked meats called choucroute. 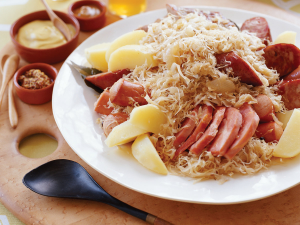 Photo courtesy of Food and Wine.

Chou is French for cabbage.  Put that together with the “kraut” in sauerkraut and you get choucroute.  Today you can find this dish on menus all over France, especially in the cooler months and there are places in Paris and Lyon that make it very well.  But the best is in Alsace, where it was born, and the best of the best is to be found in Strasbourg.  Which restaurant?  That’s like asking where’s the best pizza in Brooklyn: Everywhere!

It’s made of sauerkraut that’s baked for hours and towards the end adding the meats. At one time or another, we’ve experienced smoked ham, pork chops, frankfurters, Alsatian sausage, Toulouse sausage, Polish kielbasa, knockwurst, bratwurst, weisswurst, thickly sliced bacon, ham hocks and other meats we weren’t exactly sure about.  Some people consider juniper berries to be an essential ingredient but we don’t agree with those people.  There are always a few boiled potatoes and lots of Dijon mustard on the side.

On Alsatian menus you’ll also find choucroute fruit de mer, or sauerkraut with seafood, a combination that never really appealed to us.  Salmon, haddock, mussels, shrimp, lobster and langoustines replace the smoked meats.  It’s something to try once.

Our experiences with choucroute in France all involve overeating.  It’s impossible not to.  First of all, any respectable restaurant will pile up the sauerkraut on your plate.  Figure a pound per person and you’re just getting started.  Then all those meats!  Each one is so delicious but cumulatively they’re way too much to finish.  Of course, the chef could just serve you less, but instead they tempt you with Choucroute Royale, which just means the basic dish, with more of everything.  It’s enough for a family of four and you’re supposed to finish it yourself!

Because of its place of origin, most people drink Alsatian wines with choucroute or a beer.   Our opinion as wine lovers is that a hearty red wine goes best.

Despite the headline, you can’t visit France, because France isn’t just one place.  (These days, you actually can’t visit France at all because of the pandemic.)  The country is so varied that you can’t take it all in, either as a visitor or even as a resident.  It’s cities and countryside and mountains and beaches and, of course, vineyards.

For a wine lover, visiting France is to have a little time in paradise, and almost every sector of the country grows grapes for wine.  But the grapes in those vineyards differ tremendously, even those a short distance from each other.  For example, if you start in the city of Lyons and drive just a half hour northwards, the vines hang heavy with Gamay and the wines are Beaujolais.  The whites are Chardonnay, as they are just a bit north of Beaujolais but the red grapes are Pinot Noir.

The terraced vineyards of the Côte Rôtie.

If you leave Lyons in the other direction, again just a half hour away, you’re in the Northern Rhône and the red grapes are mostly Syrah and the whites Roussanne and Marsanne.  By comparison with America, the Northern Rhône and Beaujolais are as far apart as Carneros and Calistoga; imagine totally different production between one end of Napa Valley and the other.

The heart of Champagne is only a few hours’ drive from the heart of the Côte d’Or in Burgundy.  Yes, they both grow Pinot Noir and Chardonnay, but the wines they make are totally different.  So are the foods, the castles and the history of the two regions.  It is not hard to envelope yourself in either place but there is a wrenching disconnect if you travel between them.

Further west, the Loire Valley, also known as the Touraine (for the city of Tours) is best known for Sauvignon Blanc.  The best-known red wine is Chinon, made from Cabernet Franc, although there is plenty of Gamay grown as well.  These wines, for the most part, are not as grand as those of Burgundy and Bordeaux, but they do make pleasant drinking. 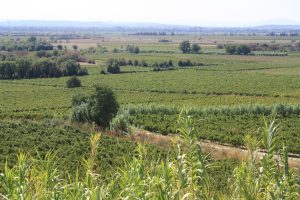 The broad expanse of vineyards in the Languedoc.

Speaking of Bordeaux, the majestic red wines grown there are primarily Cabernet Sauvignon, Merlot and Cabernet Franc, with Sémillon the major grape for white wines.  For the travelling wine taster, Bordeaux is the most difficult to visit and surely the snobbiest part of France.  By contrast, head either east from Bordeaux to the Southern Rhône Valley or south to Languedoc and the red grapes are Grenache, Syrah and Mourvèdre and the whites are Viognier and Picpoul, among others.  (Actually, in Languedoc, you’ll find a little of everything.)

And so, our advice to our wine tasting friends is not to try to visit France all at once.  Instead, focus on one or at most two regions at a time.  Get to know the people, the villages, the roads, the markets, the foods and of course the wines.  Historically, France was stitched together from many distinct regions.  To this day, a Breton and a Provençal have accents as different as a Brooklynite and a Texan.  Yes, they talk the same language, but with very different accents.   But the US is a very big country and France is relatively small.  Going a short distance in France can change everything, from the wine to the architecture to the cuisine.  But it’s all France.

The Champagne region of France has two principal cities: Reims and Épernay.  The former is of greater interest to tourists, with its grand cathedral and quite a few top-quality Champagne houses.  But Épernay is a wonderland for wine tasters.  There are so many producers, great names and small, all over the town.  And the center of it all is the Avenue de Champagne, a mile of mansions and industrial buildings dedicated to the production, sale and consumption of the world’s best bubbly, made from grapes grown in the chalky soil of Champagne. 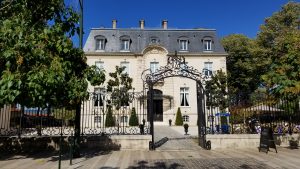 You can walk along the Avenue de Champagne, stopping here and there for a dégustation (tasting).  These aren’t the sips we Americans are used to when we go wine tasting.  Oh no, you get a whole flute of Champagne, usually for around ten euros or so.  When you do take that walk, we recommend that you stop at the Venoge Mansion (www.champagnedevenoge.com/en).  This elegant building is representative of both the grandeur and the pretentiousness of Champagne.

The grandeur is easy to see…it’s all around you in Épernay.  You’re supposed to be impressed by the ancient lineages of these winemaking establishments, but most only go back to the entrepreneurs of the 19th century.  De Venoge was founded by a Swiss immigrant who started his company in 1837.  That’s pretty ancient for Americans but its Johnny-come-lately for the French.  And although the “de” in the name sounds like nobility, it isn’t in this case.  The mansion was built in 1900, but de Venoge only acquired it in 2015. 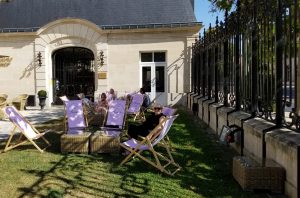 None of this history matters to you as a wine-tasting visitor.  You want elegance, both in your surroundings and in your glass.  And this is where de Venoge lives up to your hopes and expectations.  The setting is a mansion inside high wrought iron fences.  The building is in a park, most of which is behind it.  But there’s a courtyard in front with a bit of lawn and on the grass there are comfortable lawn chairs and umbrellas.  In one of the outbuildings, there’s a bar where you order the Champagne you want to drink and a server brings it to you as you stretch out on your lounger.  Turn your back on the street and you’re out in the country, sipping Champagne at a château on a sunny afternoon.  This is why you became a wine taster and this is why you went to Épernay to taste wine. 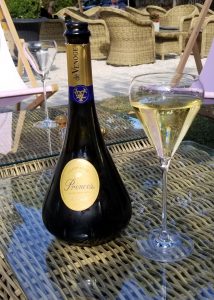 The wines themselves are quite enjoyable.  We found we preferred the blanc de noirs in de Venoge’s better tier of wines, which they call Princes.  (They also have a top of the line they call Louis XV, but we didn’t taste those wines.)

For the overall experience of wine tasting, de Venoge offers one of the best opportunities we have encountered in Champagne.  The wines are good but no better than many others available nearby.  Of course, that’s the genius of wine tasting in Champagne. They’re all good; some are just better.  But you feel like you’re luxuriating at de Venoge and that’s worth a lot when you’re in this famous corner of Wine Country.

We know many Americans who are dedicated wine lovers and who enjoy going wine tasting.  They love French wines but can’t pronounce them properly. Here’s a little guide by Power Tasting to help American wine tasters through the thickets of pronouncing French wines.