Maybe March comes in like a lion where you live, but it’s definitely lamb-like in Napa/Noma.  The US Weather Service says that the average daily temperature in Napa tops out at 67o.  There’s just enough rain to make the flowers – and the grape vines – grow.  Everything is coming alive again, and all’s well with the world. And if you travel to Napa/Noma in March you can see it and even participate in it a bit. 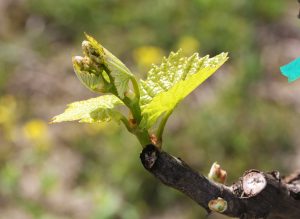 In particular, March is the time of year in winemaking known as “bud break”.  The leaves are on the vines and the tiny buds on the vines begin to swell up and send out shoots.  The brownness of winter gives way to a light green.  The annual cycle that leads to barrels full of wine starts anew.

However, it’s not all green.  There’s a lot of yellow, too, in the form of mustard flowers, which begin to blossom in late January and reach their peak in March.  Some people think (okay, we used to think) that this was a trick that vineyard managers used to enrich the vines.  But no, it’s just because it’s pretty and vineyard managers like things to be pretty as much as tourists do. 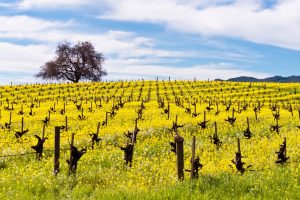 March is an especially good time of year for tasting the new releases from many of the best vineyards.  If you do the math, you’ll see that wines aged in barrels for 16 months from harvest (i.e., September) reach maturity at the end of January.  Allowing a month for getting it out of barrels and into bottles, you’ll have the chance to taste many of the newest wines in March.  At the same time, there will probably be many bottles left from the previous vintage at some wineries, so you’ll have the opportunity taste wines that have a little maturity to them.

With the crazy weather patterns that are typical of Napa/Noma, you may well want a winter coat in the mornings in March, as well as in the later evening.  But by midday, you’ll shuck the outerwear and visit wineries in your shirtsleeves.  Overall, it is wise either to wear a sweater or wrap it around your neck.

There are no national holidays in March, so hotel rates are a little lower than in the high summer season.  On the other hand, crowds do begin to show up on weekends, so be prepared for more crowded tasting rooms than you will find in the coldest winter months, but less so than in summer.

There is, of course, St. Patrick’s Day in March.  Napa/Noma doesn’t do it up like New York or Chicago, but there are places that celebrate rather boisterously.  One such is Hurley’s in Yountville.  Now, a hurley is the lethal instrument used to play Gaelic football, so this restaurant/bar is honor-bound to make a St. Pat’s statement.  (It’s also one of our favorite restaurants in Napa Valley.)

So see if you can find a shamrock among the mustard flowers and enjoy your time wine tasting in Napa/Noma in March.

In southwest France, up in the hilly area not far from the Mediterranean, you’ll find the winemaking sector called Faugères.  Because of the terrain, made of rocky soil called schist, the wines tend to be full-flavored with a minerally cast on the tongue. By the way, there is a very fine St. Emilion called Chateau Faugères, but to the best of our knowledge there is no relationship with this area.

Now, sadly, the wines of this area – in fact, all of the Languedoc – used to have the reputation for being harsh, overly alcoholic and sour.  Fortunately, many wineries in the area have discovered that sound growing techniques and sanitary winemaking can produce excellent wines that reward the growers more than the production of plonk used to.  One such is Château des Estanilles.

We sought out this winery because we had enjoyed one of their wines in Québec.  The provincial wine stores keep it well-stocked on their shelves, but we haven’t been able to locate it in the United States.  We learned that the wine we liked is in fact the bottom of their list.  Called “The Impertinent”, this wine in both red and white is mass produced (at least as “mass” as Faugères ever gets) and so there’s enough to satisfy foreign demand.  Their finer wines are made in more limited quantities and are only sold in France, mostly within the region. 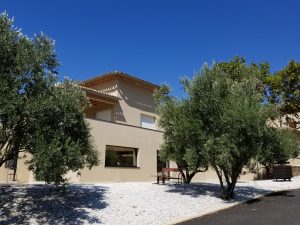 North American visitors to Château des Estanilles will feel right at home.  The winery is not a magnificent castle nor is it a rustic farmhouse.  It’s a cream-colored building with a tiled roof that would be right at home in Napa Valley.  Beyond it are extensive vineyards and the aforementioned hills, rising up on the horizon.  The interior is sleek and modern, with a tasting room that is a large white table, not a bar.  The setting makes you feel more like a guest than a visitor.

A very helpful attendant (it would be hard to call her a server) will fill your glass with any or all of their wines, topping out with their Raison d’Etre, made of Syrah, Grenache and Mourvèdre.  At 48 euros ($55), it isn’t cheap but it’s a lot less than a wine of equivalent quality would be elsewhere in France.  [It isn’t Power Tasting’s usual practice to discuss wine prices.  However, we want to give an idea of the value you can get for your money with Languedoc wines.]

As might be expected, you will get more out of your visit if you can speak French.  But at Château des Estanilles, as elsewhere in the area, the people are used to having English-speaking guests and will gladly accommodate you.  It would help if you try to at least pronounce the name of their winery correctly: ESS-ta-neel. 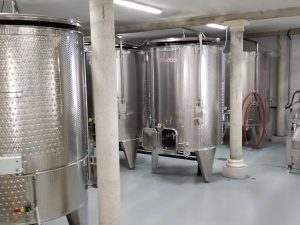 The working area in the Chateau des Estanilles winery

When you visit Château des Estanilles, be sure to take a look at their winemaking facilities.  They are all modern, with lots of stainless steel and clean as a whistle.  This is instructive, because it shows how the Languedoc’s vintners have advanced.  You won’t be able to see the natural techniques they use in the vineyards, eschewing pesticides and fertilizers. But you can give respect to the modernity of their winemaking practices.

You’re planning a vacation in northern Italy.  And you’ll certainly want to spend some time in Venice.  Lucky you.  As a wine lover, you’d like to do some wine tasting.  Right around Venice are Soave and Venetzia-Friuli, both famous for their white wines.  Oh, but you wanted to taste some major league red wines?  In that case, you can drive about an hour and a half west and you’ll be in Valpolicella, where you can sip Amarone to your heart’s content.  We’d like to suggest that you take more than a day trip and enjoy the pleasures of the main city of Valpolicella, Verona.

It’s an ancient city, as evidenced most of all by the magnificently intact Roman stadium on the grandest of Verona’s wide plazas, the Piazza Bra.  They still stage an opera festival there every summer.  Even if you can’t get a ticket, it is quite a pleasure sitting in sidewalk caffe on the piazza, sipping a cappuccino and admiring the stadium and other grand buildings of a more modern era. 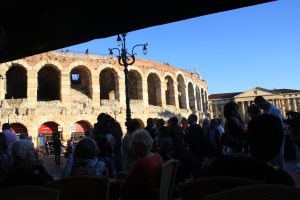 The ancient Roman Arena on the Piazza Bra.

In fact, Verona is a city of many wonderful piazzas, much like Venice.  The Piazza d’Erbe was the herb market in the Middle Ages.  Today it is lined with restaurants, all with tables in the open air.  The middle of the square is full of carts selling all sorts of touristy items, most importantly little puppets of Pinocchio, a famous local resident of the past. 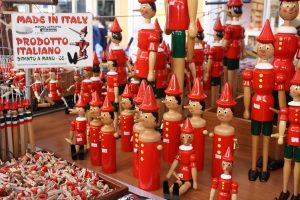 In many ways, the Piazza d’Erbe is best appreciated at night, when the Renaissance buildings and towers are lit up.  It’s a dramatic backdrop for a bowl of spaghetti or big fat pici, the locally popular pasta.  (A word of warning about the food in Verona: horse and donkey meat are very popular there.  So if you see cavallo or asino on the menu, think twice.)

Just beyond the Piazza d’Erbe is the Piazza Seignoria, with a large statue of Dante looming over it.  He was a Florentine, but was exiled there for his political views and settled in Verona.  The Veronese adopted him quite readily.  In those days, Verona was a possession of the Venetians so anyone that Florence was against, Venice was for. 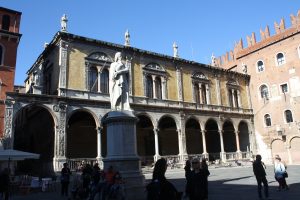 Piazza Seignoria, with its statue of Dante.

Verona has a special place in the hearts of lovers of Shakespeare’s plays.  For one thing, there were the Two Gentlemen of Verona.  And then there was a notorious feud between two Veronese families, the Montecchi and the Capeletti.  You may know them as the Montagues and the Capulets.  Today you can visit Juliet’s balcony, where single women have taken to leaving little messages on the wall asking Ms. Capulet to help them find a lover as true as Mr. Montague.  In fact, you can have dinner in a restaurant in Romeo’s house.

As you wander through Verona’s medieval and Renaissance section, you will find a high gate with a clock in it, that turns an ordinary street into a special place.  At its base is a bust of Shakespeare with this inscription in both English and Italian:

“There is no world without Verona’s walls, but purgatory, torture, hell itself.  Hence, banished is banish’d from the world, and world’s exile is death.” Romeo and Juliet, Act III, Scene III

With rare exception, no one goes wine tasting with the exclusive purpose of sipping dessert wines.  Sure, that’s the idea if you’re going to Sauternes in France, and maybe in the Canada’s Niagara region, but that’s about it.  On the other hand, almost everywhere in Wine Country, there will be winemakers who make a bit of sweet wine as a little extra.

In Australia, they call them “stickies”, and with good reason.  In Italy, they make Vin Santo in Tuscany, Reciotto in Valpolicella and Passito in Sicily.  Canada and upstate New York have their ice wines.  Of course, there’s Port in Portugal.  And in California, as you might expect, many wineries have a dessert wine available and they’re all very different.  Among our favorites are Grgich Hills’ Violetta, Dry Creek Vineyards’ Soleil, and Beringer’s Nightingale.

There are a lot of different types of dessert wines.  The best, in many people’s opinion, are the wines affected by the botrytis fungus that sucks almost all the moisture out of the grapes.  The resulting shriveled fruit is very sweet and very concentrated.  In Sauternes, it happens almost every year, but elsewhere it happens sometimes and sometimes not.  Ice wines are made in climates where the grapes can freeze in late autumn.  In warmer places, they just leave the grapes on the vines and produce late harvest wines.  In our opinion, Port only comes from the Douro Valley in Portugal, but many others make a wine they call Port, made from Zinfandel and other white grapes. 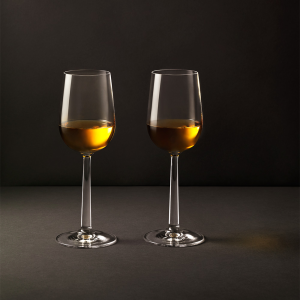 So wherever you travel, if you want to tickle your sweet tooth after drinking dry wine, here are some tips.