One of the features of Power Tasting is a monthly article on a Place to Visit that isn’t about wine but is in Wine Country.  And since this edition is about the beaten path, there’s no path in all of France that’s been trod more often than the one that leads to the Eiffel Tower.  But wait, is Paris really in Wine Country?  Surprisingly, the answer is “yes”.  You can make a day trip to Champagne or the Loire and amazingly, there are still a handful vineyards in Paris itself.  None of the urban vineyards are very big (one has only ten vines) but they qualify the city for inclusion. 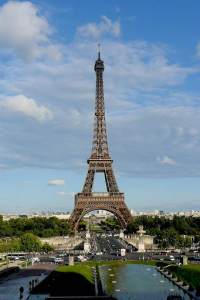 The Eiffel Tower from the Trocadero.  Photo courtesy of the Hotel Eiffel Trocadero.

So about that tower.  For one thing, it’s one of those iconic structures, along with the Statue of Liberty, Big Ben and the Kremlin, that are emblematic of their entire country.  Its story is pretty well known, so we’ll recount it here only briefly.  It was named for Gustave Eiffel, whose company designed and built it for the 1889 World’s Fair or Exposition Universelle.  It was derided in its own time but has become beloved ever since.  You can ride to near the top for a great view of Paris, with restaurants on the second and third levels.

The issue is not whether you’ll see the Eiffel Tower.  When you go to Paris, you can’t miss it and you’ll take your picture in front of it.  We’d like to give you some ideas as to how to see it.

The Eiffel Tower is located in the 7th Arrondissement, on the Left Bank of the Seine. This sector is one of the more elegant residential areas of the city and worth walking around in.  The tower itself is in a park, the Champs de Mars, where royal troops used to train back in the time just before the French Revolution.  In pleasant weather, you can join Parisians in stretching out, kicking a ball or listening to itinerant musicians.  Or you can walk up to the Eiffel Tower, lean your head back and try to take it all in.  Maybe that’s why Eiffel’s contemporaries couldn’t appreciate it; they couldn’t really see it properly.

For us, the best place to see the tower is across the river at the Place du Trocadero.  Sit at a café on the place and soak in the view.  From there you can see the tower in the perspective we believe Eiffel intended, massive but contained within Paris.  Keep in mind that only a few decades before the fair, Paris had been completely renovated into the gorgeous city we know today.  The Eiffel Tower added an exclamation point to the city. Viewing it from the Trocadero puts it in context.

Hovering over the city.

As you walk around the sector where the tower is, you’ll see it above many of the rooftops.  There’s no better way to enjoy this kind of view than sitting in a café with a coffee and a French pastry or with a glass of wine.  And do see it at night.  Since the Millennium celebration, the Eiffel Tower erupts in a symphony of flashing lights, for five minutes every hour on the hour.  The Parisians have never lacked for a sense of the dramatic.