You’re in a winery and you just adore the wines you’ve been tasting.  In fact, you’re quite voluble about it, telling your friends and total strangers just how good these wines are.  At this point, the friendly waitperson who has been serving you suggests you join their wine club.  Your powers of sales resistance are at an all-time, alcohol-induced low.  So you sign up.

We like to think we have stiffer spines than that, but we also know we’ve joined around twenty clubs over the course of time and are currently members of six of them.  (It’s a good idea to join for a while and then resign when you have enough from that producer in your collection.)  We very much enjoy receiving great wine, even if we have to put some of them down for a few years. 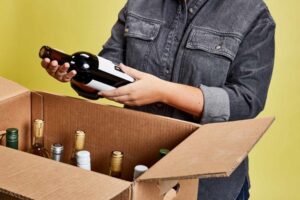 Photo courtesy of The Spruce Eats.

What we don’t like very much is the process we have to go through to get those wines.

For one thing, there are too many deliveries.  For example, one of the clubs we belong to delivers six times a year.  At the other extreme, another club only wants you to buy a certain number of bottle each year, which we take advantage of each spring.

And then there are the shipping costs.  In many instances, the fee for sending you the wines is nearly equivalent to an additional bottle.  One thing we appreciate in some clubs is the occasional special deal for reduced rate shipping.

Prior to each shipment, the winery sends you an announcement of the next wines they’ve chosen for their members.  We have found that in virtually every selection, there is at least one wine that we don’t particularly want.  Most clubs allow you to customize your order or to switch out some wines, but most expect you to buy the same number of bottles, or to spend the same amount of money.

This wouldn’t be so bad if wineries had first rate information systems to serve their members.  Sadly, that is not often the case.  We have had experience with web sites that are inaccessible, that don’t show all the wines available, that will allow you to add to an order but not subtract, or that simply don’t work.  At this point there is no alternative but calling the winery, which especially in these pandemic times means that you leave a message for someone working at home, who may or may not get back to you in a timely manner.

We have also experienced mess-ups on the winery’s side that resulted in our getting the wines we ordered and the wines that were on the original membership shipment list.  If the winery is nice, they’ll tell you to keep the wines you hadn’t asked for because it was their error.  In other cases, we have had to return the unwanted wines, which is a general pain.

Now, don’t let us deter you from joining one or more clubs you’re genuinely interested in.  But no matter how large or famous the winery may be, they’re still small businesses, with the systems and processes that are the weaknesses of all such enterprises.  Enjoy your wine, because you probably won’t be too crazy about the process of getting it.